GROWING UP IN LOUISA: New Year Brings Hope! (I Hope!!)

Here we are again! For many people 2021 was hard. We had an economy that bombed and that made the stores to suffer in finding goods. Some folks horded key products making it difficult for rest. On top of that, we have had political unrest and countless attacks at schools and work places. We see inflation raising its ugly head. The worst by far was the pandemic that has made so many of us sick and has put many friends and family in graves. This condition hit all around the world and is a source of worry for us all. This year celebrations are toned down in hopes of avoiding sharing this illness all around. Already, it appears that Christmas celebrations have added to the numbers struck by this sickness.

As I write this it is already January 1, 2022. Last night I could hear fireworks and some shouting from neighbors who were spitefully cheering and having a party. The commotion didn’t last long, so I turned over, pulled up covers and got some shuteye. While lying there I could not help but recall other times such as my teen years and early adulthood.

I remember one year when the radio was turned on and the adults gathered ‘round to bring in the New Year. I had been told by my cousins that I should ask mom if I could stay up late. Mom explained to me that on December 31st, the year would change from 1946 to 1947 and IF I could stay awake, I could join the celebrations. As part of the deal I could listen and join in when everyone counted off the seconds for the grand celebration. I anticipated that somehow all things would suddenly be new. They weren’t.

Mom explained that the date on our calendar had changed but nothing else had. I shrugged and went on to bed. Oh, boy. Big deal! A nice warm bed heavy with quilts and a lumpy mattress was a welcome sight. It was several years before I understood the idea of having ‘hope’ of the New Year being better than the last. Frankly, I didn’t see a lot wrong with the past year. Oh the innocence of childhood! That would change as I grew older and developed my own worries. 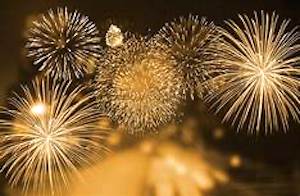 It was an annual tradition for the grownups to stay up on New Year’s Eva to welcome the infant New Year. I thought it would be more fun if we played Monopoly to burn away the hours of boredom while we waited for that magic moment. Somewhere through the years the adults obtained enough funds to install a big TV console. Being a sophisticated guy of ten or so, I had seen several of the celebratory TV shows in my time, but this time it would not be at a neighbor’s house, but in our own living room! I saw the pictures of a great crowd of folks who were said to be in New York at a place called Time Square. I found out later that the place was part of a famous street called ‘Broadway.’ This was where legitimate theaters were scattered along, each with a big marquee announcing the title and stars of a featured play. This area was given the name Time Square when the newspaper, The New York Times, moved to this location. The big ball was installed and marked the beginning of each new year.

Teens are notorious for feeling bored, especially when repeat performances of events occur in their lives. They tend to want excitement and fresh, new experiences, that is until you try to stop a tradition. They are quick to point out if things aren’t the same. Because of my propensity to become bored I finally reached the place where I preferred to just go to bed. Lying there, much the same as last night, I could hear the fireworks, legal or illegal, going off around our little town. I fully expected that Bernard Nelson or Jake Jordan was out chasing down potential criminal fireworks activities, but then again, maybe they were secretly helping them light the fuse. Fireworks, especially in that day were dangerous. 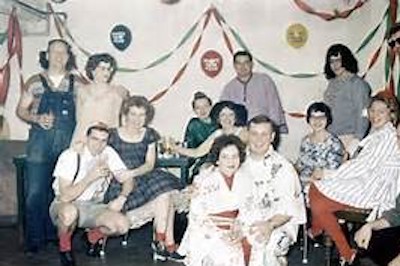 Parties were thrown by folks around town as society allowed. As a dry county I’m sure no one had any alcoholic drinks. After all, the very pillars of the community would gather at one home or another, or at a predetermined location such as one of the restaurants in town, or at the Compton building on the corner of Lock Avenue and Pike. It was there on that same second floor room that I was forced by mom to learn the first elements of tap dancing. In the end the instructor, and the shoe shop that put ‘taps’ on my shoes, made out with mom’s money and wasted some of my good playing time. I think I was the only boy in the room, so I felt very unhappy.

My fellow classmates can tell you that we’ve been around for a lot of New Year celebrations over the years. I have lost memories of many of them, but regardless, I know that I am blessed, for I love the memories of past years and look forward to those that may come. It’s impossible to know how many more may come along but we can enjoy the ones we are given.

My wish for you is that you have just the kind of a New Year that you’d like. Whatever you do I hope that your life experiences are followed by a very happy, successful, and blessed New Year.  mcoburncppo@aol.com

TOLSIA GIRLS COME UP JUST SHORT IN THE LITTLE GENERAL SHOWCASE; BACK HOME NEXT WEEK FOR TWO GAMES