GROWING UP IN LOUISA: SANTA CAME!!

It was still early, barely past first light when the kids in our house jumped up, woke each other and bounded down the staircase to the living room. Our eyes were wide open in anticipation of finding all kinds of wonderful things gifted to us by Santa. My mom and Aunt Shirley dragged themselves down in hopes of watching the expressions as paper and ribbons exploded under the attack to tear open yet another package addressed to us.

Make no mistake, we had already spotted the big gifts such as an electric train or a new bicycle. If weather would permit we would soon take the bike for its maiden trip about town, perhaps to a friend’s house to show off our new prize. There would be time enough to play with toys after we rode our bikes at high speed to meet our friends and compare Christmas gifts.

It was made clear to us before we could do anything else, we’d have to clean up the messy wads of wrapping paper, put the boxes of new clothing back under the tree, and slow down enough to have a good breakfast. That let the air out of our sails, for sure, but then again, life was good and we were blessed.

We had no idea of the cost of those transpiring moments, nor did we see the glowing pride in the grownups faces as they stood back and watched. They had sacrificed so much in hopes of avoiding trauma that one or more children might suffer if they had felt slighted. 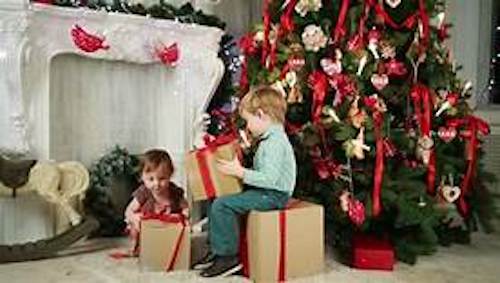 In the end, all this was relative. Expectations were rarely higher than might have been because kids and grownups alike knew to hedge their wishes to what was normal or possible. No one wants be disappointed and are ready to accept something less. Some of us have finally reached a place that we find joy in giving, but want nothing for ourselves. We now know that the best gifts are not of the type that can be brought by Santa.

There were slight differences from family to family as to what took place on Christmas morning. Some opened gifts on Christmas Eve, perhaps so parents could sleep in, or perhaps the milking had to be done early the next morning. Some families could afford more ‘things,’ while others struggled to do much of anything. In the end, maybe it wasn’t what Santa had left, but that we each were remembered and treated with love.

We needed not to worry because the gift, the only gift that counted, was given already in the birth of the baby Jesus. It wasn’t given to show our worth to others or for bragging. It was freely given to everyone as the method provided by the Almighty, as the gift that would keep on giving us forgiveness. In a manner of speaking we would only have to open that package to find the greatest gift of all time. If you haven’t yet opened your gift, make this Christmas the time to accept the most gracious, undeserved gift of all, Jesus Christ.