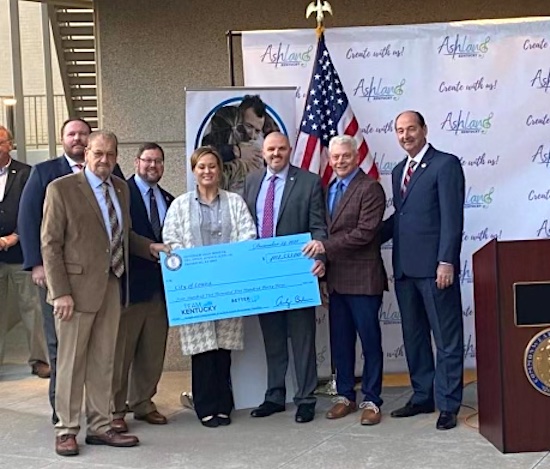 Robinson confirms deal made to purchase part of Bellefonte

Lawrence County, the city of Louisa, and a small area in Blaine, were announced as recipients of several hundreds of thousands of dollars from the state government, just a small sliver of the money that was awarded from the nearly $50 million worth of grants for projects in northeastern Kentucky that were announced Tuesday evening in Ashland, KY.

The large number of projects that were revealed ranges from infrastructure upgrades to work on a new convention center.

Adkins, who was joined by Lieutenant Gov. Jacqueline Coleman and former Governor Steve Beshear, father of current Governor Andy Beshear represented Governor Beshear who could not make it due to the public event as he is leading the rescue and recovery operations of the catastrophic storm situation in western Kentucky. His chief of staff Rocky Adkins announced multiple projects and developments for the four counties.

In total, just under $49.1 million dollars were awarded to the various mayors, judge-executives and dignitaries for the slated projects in the cities, counties, and utilities they represent.

“We will bring that prosperity back to this region that we have all known,” Rocky Adkins said. “This is a great day for this entire region.”

Of the just over $49+ million dollars announced Tuesday evening, nearly $47 million was given to Boyd County, the vast majority of which is for a massive road project to start sometime in latter part of 2022

Separately, it was also confirmed at the public event of the reports earlier in the day that Addiction Recovery Care (ARC) out of Louisa has signed a letter of intent with Bon Secours Mercy Health for the purchase of a portion of the former Our Lady of Bellefonte Hospital. ARC will be putting in a treatment center, creating 250 jobs.

“Just last month new data came out indicating major increases in drug overdoses in our state and all around the country,” according to Tim Robinson, ARC’s founder and CEO. “Real lives are on the line, and it’s critically important we reach these individuals where they are with the addiction treatment and recovery services they need,” Mr. Robinson said.

The two biggest money projects announced were for Boyd County, with more than $45 million ($45,745,411.27 to be exact) will be going to the Boyd County Fiscal Court for a project to upgrade U.S. 60.

On Monday, December 13, a contract was awarded to Walker Construction and Materials LLC to complete and upgrade U.S. 60 coming off I-64 at Kentucky Electric Steel into the 4-lane at Route 180.

Secondly, Rocky Adkins also announced that one million dollars in funding for the designing and engineering phase of a new convention center in downtown Ashland.

Additional money was awarded to other upcoming projects in Boyd County, with the rest of the funds going to the other three counties. Here are the rest of the future projects that were announced Tuesday evening that will be receiving funding:

“…This award is huge for the city. It will cover the costs of engineering and design which is the first step toward a much needed sewage treatment plant for Louisa and Lawrence Co. We sincerely appreciate the governors office, our legislators, FIVCO Area Development District, and Lawrence County. We pledge to move forward to obtain additional funding for construction in the coming year,” Slone told The Lazer today.

Lawrence County Judge Executive Phillip Carter was pleased to receive on behalf of Lawrence County a check in the amount of 156,397.00 for a Flood Control Local Match Grant.

“This grant will help Lawrence County recoup its part of the cost share owed for FEMA 2020 flood damage. We are also pleased to receive $40,000.00 for water line extension and hopes to be able to announce even more funds for water line extensions throughout the county in the coming months,” Carter said today.  “Also, we are pleased to work with Louisa Mayor Harold Slone to help secure funds of $400,000  that will be used in the first phase of building a new sewer treatment plant which is critical to the future of Louisa and Lawrence County.”

In a personal project, with a personal appeal for help from the state, Lawrence County Deputy Judge-Executive Vince Doty contacted Rocky Akins in regards to a situation in the Blaine area, involving a single mother whose water well has collapsed. This led to the mother and her children having to walk down to the creek and pull the water out by bucket. Eventually, a storage tank was set up and the fire department would come by and fill it up.

But luckily, thanks to a $40,000 grant awarded to the Lawrence County Fiscal Court, the single mother and five other households will now be added to the county water system.

• About $417,000 will be going to the Big Sandy Water District to repair a water line crossing the river to Kenova. Adkins said the money will replace that pipe, which has almost come out of the water a few times.

• $540,417 will go to the Cannonsburg Water District to replace asbestos lines along Shopes Creek.

• $231,575 will go to the Boyd County Fiscal Court to repair and resurface Four Mile Road.

• The Rattlesnake Ridge Water District will receive a $93,000 grant for updates.

• Flatwoods will receive $130,000 in grant money for a water tank rehabilitation project.

• The city of Greenup will receive $130,000 for aging water pipe replacement, updating the system from 6 inch to 8 inch.

After the conclusion of all the money that was allotted to the four intended counties, Rocky Adkins spoke to the very large attending crowd assembled outside the hotel, by boasting with glee about what has been done, can be done, could be done, and what hopefully will be done in the future to help the region to be revitalized.

“When people work together, great things happen. We have invested $11 billion across this state to bring 17,000 jobs here paying an average of $24 an hour. I know what you’re thinking; when is it going to happen here? We will not rest until our steelworkers, our rail workers and our coal miners are back to work,” Rocky Adkins said to the enthusiastic audience of regional residents listening to his speech.

(This article contains the opinions of its author)

SENATOR PHILLIP WHEELER: WE ARE ONE KENTUCKY FAMILY THIS CHRISTMAS