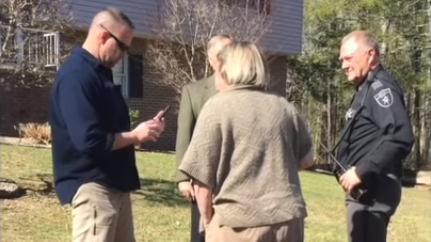 An image from the March 2020 home visit. | Courtesy photo

CHARLESTON – The state Supreme Court has decided to follow the Judicial Hearing Board’s recommendation for a Raleigh County family court judge who conducted a search of a man’s home following a post-divorce contempt hearing.

The court, in a 4-1 ruling issued November 18, said Judge Louise Goldston should be censured and fined $1,000 for her actions, which took place in early 2020.

“My client is happy with the opinion and thanks Judicial Disciplinary Counsel for their hard work and integrity in protecting his rights and holding judicial officials accountable,” attorney John Bryan told The West Virginia Record of Matthew Gibson, the man whose home was searched. “We’re happy that the Supreme Court made it extremely clear that these practices should never occur again in West Virginia despite the protestations of the Family Court Judicial Association.”

On March 4, 2020, Goldston stopped a court hearing and ordered the parties to meet at Gibson’s house to search and to seize items Gibson allegedly failed to turn over to his ex-wife following their 2019 divorce. When Gibson protested, Goldston threatened to jail him for contempt. The incident was recorded on a smartphone, and it soon appeared online.

Goldston was reported to the state Judicial Investigation Commission, which charged her with violating the state Code of Judicial Conduct.

“The judge professed remorse and entered into a settlement agreement with Judicial Disciplinary Counsel,” Justice Tim Armstead wrote in the majority opinion. “Under the agreement, the judge admitted to both the conduct in question and to the fact that it violated the Code of Judicial Conduct. Both parties agreed to recommend that the judge be censured and fined $5,000.”

The Judicial Hearing Board, however, rejected the parties’ recommendation.

“The Hearing Board recommended that the judge be admonished and fined $1,000, and — believing that a judge’s ‘inherent authority’ to conduct ‘judicial views’ is ‘uncertain’ — requested guidance from this court,” Armstead wrote. “Both Judicial Disciplinary Counsel and the judge object to the Judicial Hearing Board’s recommendation. Seizing on the Judicial Hearing Board’s uncertainty about ‘judicial views,’ the judge now attempts to persuade us that her search of the residence was lawful — even as she professes to remain bound by the settlement agreement.”

“We find that she led a search of the homeowner’s residence, not a ‘judicial view,’ and that, in so doing, she exercised executive powers forbidden to her under the West Virginia Constitution,” Armstead wrote. “We find, further, that the judge compounded her error by the manner in which she conducted the search.

“Accordingly, we disagree with the Judicial Hearing Board and publicly censure the judge for her serious misconduct. In addition, we order the judge to pay a total fine of $1,000.”

Goldston has served as a family court judge since 1994, and she presides over cases in Raleigh, Summers and Wyoming counties. Before this, she never had been disciplined for judicial misconduct. But she did admit she had a 20-year practice of going to parties’ homes “to either determine if certain disputed marital property was present and/or to supervise the transfer of disputed property.”

“We find that the seriousness of Judge Goldston’s conduct, coupled with the manner in which such conduct was carried out, has undermined the public’s confidence in the administration of justice and justifies imposition of a censure in this matter,” Armstead wrote. “An admonishment, as recommended by the Judicial Hearing Board, merely constitutes ‘advice or caution’ to refrain from further violations, while a censure constitutes ‘formal condemnation’ for such conduct.

“We find that the nature of the conduct clearly warrants such condemnation by this court. As we have stated herein, Judge Goldston’s conduct constituted a search, rather than a mere view, of the ex-husband’s home. The parties appeared in court for a hearing before Judge Goldston.”

In March, Gibson filed a federal lawsuit against Goldston as well as the Raleigh County Commission and three sheriff’s deputies related to the incident. That was the same month the Judicial Hearing Board issued its recommended decision to the state Supreme Court regarding Goldston’s actions after she had been charged with violating at least seven rules in the Code of Judicial Conduct after admitting she visited homes of litigants to check on disputed property.

Gibson, a federal law enforcement officer, says such a visit was threatened in 2018 by Kyle Lusk, his ex-wife’s attorney. Lusk also is named as a defendant in the lawsuit.

In September 2020, the state Judicial Investigation Commission filed its formal statement of charges with the Supreme Court against Goldston.

In February, the state Judicial Disciplinary Counsel’s brief in support of joint agreement to discipline, said, “Nothing trumps the Constitution.” It recommended the Judicial Hearing Board adopt the agreement of public censure and a $5,000 fine for Goldston.

“There is absolutely no rule, statute or case law that gives a family court judge the right to enter anyone’s home without permission to search for items that a litigant failed to turn over in a divorce case,” the brief states. “Permission must be knowing, voluntary and intelligent. If it isn’t, a family court judge cannot enter. Family court judges cannot conduct jury views as part of a contempt proceeding. …

“By going into Matt Gibson’s home without permission, respondent (Goldston) engaged in an unreasonable search and seizure and must be held accountable.”

The JDC brief said a family court judge has no authority to conduct home views and that Goldston violated Gibson’s constitutional rights against unlawful search and seizure as well as denied his due process and equal protection under the law. It also said Goldston didn’t follow the appropriate mechanism for contempt proceedings.

Justice Bill Wooton dissented and reserves the right to file a separate opinion. Justice John Hutchison, who previously served as a circuit judge in Raleigh County, recused himself from the case. Circuit Judge Jennifer P. Dent took his place in hearing arguments on the case.

Coal prices highest in more than a decade as stockpiles dwindle after hot, dry summer boosted use of electricity