GROWING UP IN LOUISA: Shopping Days ?

Well, the big Thanksgiving celebration has arrived and slipped away. The next page is now about bargains, sales, and decorating for an even bigger day known as Christmas.  Many people know that mankind’s hope is not hinged on gifts, but the recognition of the birth, death, and resurrection of the Christ child who was freely given to us by a merciful God. This was the first Christmas gift. Little kids, on the other hand, cannot help but think that Christmas is about grand celebrations that end with RECEIVING and giving gifts. We all put emphases on the importance of staying on Santa’s “Good List,” (masking our real motives) so we might find wonderful presents under the tree (Incentive or bribe?) Personally, I think our efforts should be more about the baby Jesus and the amazing story of His birth.

For a time the TV ads, cartoons, and even our teachers encouraged a mixture of secular and traditional activities, but they are slow to explain the reason for that nativity so long ago in Bethlehem. Our courts have literally put ‘the fear of (mentioning) God’ in them. The freedom of speech for them is cloaked in the idea of separation of church and state. Indeed, the government ought not establish or favor a religion, but to deny citizens the right to express religious thought is a restraint of our freedom. What’s the government’s role in stopping us from wishing others a ‘Merry Christmas?’ 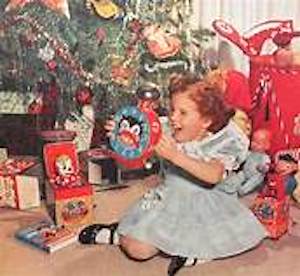 Back in the forties and fifties, at least in Louisa, the Christmas season kicked off soon after Thanksgiving. The stores downtown went to work putting up Christmas decorations at that time. Now that day is devoted to ‘Black Friday’ sales and the stores have been selling Christmas related goods since Halloween. In my day we didn’t have those sales, nor did we have the following ‘Cyber Monday.’ In fairness, we didn’t have anything like today’s technological advances. Today, the holiday season starts much earlier in hope of creating and snagging all the Christmas dollars possible for a healthy year-ending third quarter sales. This was the season that is definitive for businesses, and would spell out a ‘life or death’ sentence for those just hanging on. Investors, storekeepers, and bankers watch the marketplace carefully, holding their breath in anticipation of the results.

The carols, or at least many of them, tell the story of Christ’s birth, but when it is mixed with fictional stories such as the Grinch, Rudolf, and the Polar Express, the truth is watered down in favor of having ‘good feelings’ kinds of stories. They are lovely stories, but they distract rather than explain. An exception is ‘A Charlie Brown Christmas.’ In this play, Luke 2 is presented to those who are open to hear.

Our little Louisa was to me a magical place during the Christmas season. It was special on other holidays, as well, but it was especially so during this time of year. Over time our memories built up and continued to grow in understanding and taste. As to gifts, it wasn’t the lack of things we remember most, but rather what really mattered. The townsfolk were more than just friends. They were family. More than anything, we knew we had each other’s back and looked for ways to show ‘good will toward men.’ Even in the worst of years my family was blessed in some way or another. While it was normal for some of us to have disappointments, we still had each other and were prepared to stand tall for the sake of others. Christmas was, and is, special. It had a greater meaning than just gifts. The value of the season was far greater than even we knew, and it continues for those wise enough to tend to the traditions.

In spite of a poor economy, merchants in our little town increased their inventories and displayed the latest in toys, toiletries, tools, and tinsel. The Favorite five and dime (we called it the ten-cent store), the Corner store (under the Brunswick Hotel,) Ed Land’s Sundry, the hardware stores, Wright Brother’s Jewelry, the Bargain Store, and the several department stores, were all primed and ready should someone come in to buy a gift. Street decorations and the storefront displays set the town hopping with customers looking for just the right thing. I remember the friendly people that met on the streets and talked under the awnings while their kids mingled with peers around the supporting posts. It seemed as if music was everywhere, while all eyes were on the heavens looking for that first fluffy snowflake to make the season right. 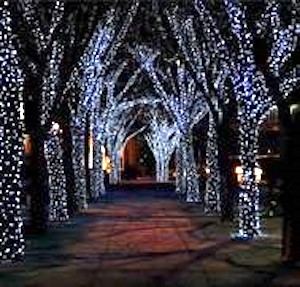 I remember those heavy ‘outdoor’ lights that some people strung over the evergreen bushes around their house. These were bigger than the bulbs used in-doors. We also had those ‘new-fangled’ bubble lights that were in fashion for a short time. In those early days the bulb colors were limited to green, red, blue, and maybe a rare yellow, or orange. It was years later before miniature lights came in single colors, such as blue or white. These have evolved to the point that some commercial businesses use them year around to add mystique to an antrum, or lobby. Even the university near my home has the trees on the walkways lit all the time. It’s as if the campus is a fairyland.

In Appalachia, many families suffered from the results of war, the great depression, and the ups and downs of the mining industry. Many families simply lacked enough funds to give a lot of things to their children. Keeping up mortgage payments and feeding everyone was often difficult. The gifts they gave pretty much had to be homemade, or were simpler things that could be afforded. Some kids looking in their stockings found gifts of fruits, nuts, penny candy, or other small things that were appreciated. Toys, other than the homemade variety, weren’t always possible to obtain. Sometimes things like books of fairy tales, or hand-me-downs where saved to be passed out on Christmas morn.

It was normal for many of us to turn to making hand-made gifts for our friends and family. I remember that fathers and grandfathers often worked for weeks, if not months, to secretly produce a wooden rocking horse, a new baby’s cradle, a child’s rocking chair, or maybe some new shelving for mom. Workshops were ‘off-limits’ during the fall months. They were deep in freshly made sawdust. 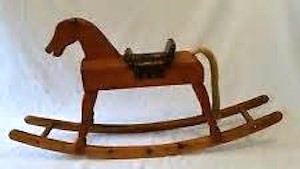 Inside many homes, mothers and grandmothers would spend long hours sewing clothing, making sock-monkeys, knitting sweaters, or mittens, or gloves, or even for that special someone, an afghan. I know I was trapped more than once when Granny had me hold a skein of yarn so she could roll it into a ball. The quilting frame told me that a new quilt would soon be stitched that would make the cold spells bearable on those cold winter’s evenings. These patchwork masterpieces added a heavy weight over the sleeping child, but felt so good.

Felt stockings ‘hung by the chimney with care,’ were often handmade, either by older kids or one of the adults of the household. We knew these gifts were made with loving hands. They were long-cherished and kept safely away in cedar chests during the summer ‘off-season.’ Fall was an especially busy time as the holidays were anticipated with a touch of dread that everything was not yet at the ready.

The ads will read that there are only ‘X’ days of shopping until Christmas. Let’s keep them focused on making good memories based on the real reason for the season.  mcoburncppo@aol.com