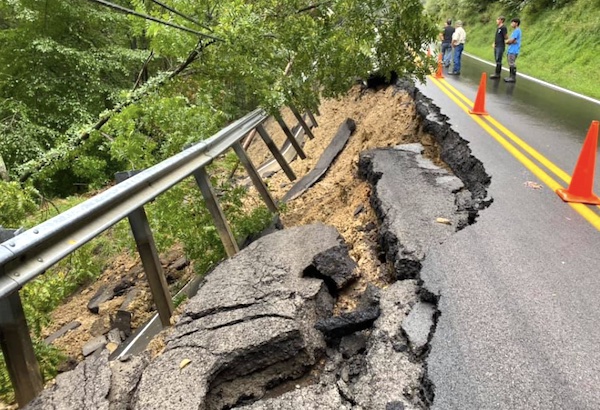 Funds will mend infrastructure in Johnson, Lawrence and Morgan counties

“As Governor, I am committed to helping our Kentucky communities recover from the dangerous impacts of flooding,” said Gov. Beshear. “Following historic flooding in Eastern Kentucky over the past couple of years, this funding will ensure our people can once again travel the safest roads and bridges, have high quality drainage systems and can have the confidence that infrastructure in their community can withstand future damage from severe storms.”

Johnson County
The Governor announced $421,485 for Johnson County Fiscal Court and a $391,913 award for the City of Paintsville. Both awards are for repairs to damage caused by the February–March 2021 storm event. Johnson County Fiscal Court will use the funds for infrastructure repairs. The City of Paintsville will use the funds to repair embankments, drainage systems, parks and recreation centers; remove debris; reimburse the city for emergency protective measures; and replace emergency vehicles and equipment.

“Disasters such as floods and ice storms are stressful on community resources at the time of the event and even more so during the long recovery process,” said Johnson County Judge/Executive Mark McKenzie. “Johnson County was hit with a crippling ice storm and a devastating flood within the span of six weeks earlier this year. The March flooding event left Johnson County facing costs associated with embankment failures and culvert washouts at approximately 250 sites, with a price tag of approximately $3 million dollars with a local match of $421,000. LMPP funds will be used to make the required FEMA 13% local match, easing the financial strain created by the disaster, allowing the community to build back stronger through the recovery process.”

“On behalf of the city of Paintsville, we sure appreciate this money. Because of what the Governor has done, it’s going to make the city a much better place to live and it’s going to keep our citizens safe,” said Paintsville Mayor Bill Mike Runyon. “We appreciate you. Keep doing what you’re doing.”

“I would like to thank the Governor for expediting these funds. Without his help, we could not continue to do the repairs and maintenance required to help everyone in Kentucky travel safely and get to and from their homes safely. It is gratifying to see that the Governor and his administration recognize that,” said Morgan County Judge/Executive John Will Stacy. “It is important to see how great a role the administration is taking in the new economic development of Kentucky. These tax dollars that we are going to spend on creating new roads and repairing the ones we have could not have been done without the Governor’s hard work.”

The funds announced Thursday are administered through the Department for Local Government.

Dr. GLENN MOLLETTE: The Haiti Kidnapped Missionaries, consider the costs of such trips