LAWRENCE CO. COMES UP JUST SHORT AGAINST BELFRY IN PLAYOFFS

Pond Creek, Ky. — After falling behind by two touchdowns in the first quarter Lawrence Co. ( 8-4 ) came up just short 21-14 against Belfry ( 6-6 ) Friday at Haywood Stadium in the second round of the playoffs.

Coach Alan Short looks over the play sheet as #11 Alex Strickland and #2 Kaden Gillispie await the fourth down call. 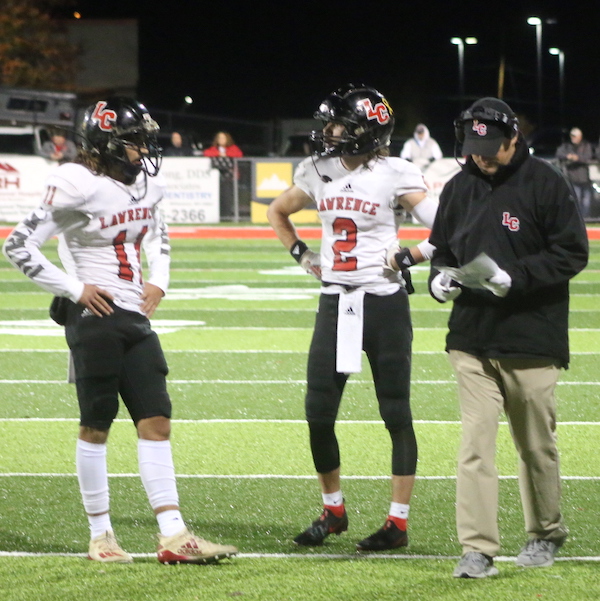 Belfry received the opening kickoff and scored on a Braxton Hatfield 3 yard touchdown run and Gideon Ierson booted the extra point and the Pirates led 7-0 with 10:10 left in the opening period.

After a Bulldog punt Belfry was facing fourth and 11 from the Lawrence Co. 26 when Caden Wollum found Cameron Varney do the touchdown and Ierson kicked the extra point to make it 14-0 with 2:46 to go in the opening period.

Trailing 14-0 the Dawgs did not fold and held the Pirates scoreless the rest of the first half and the halftime score was 14-0 Belfry.

#11 Alex Strickland comes into celebrate after a QB sack by #1 Dawson Bellomy. 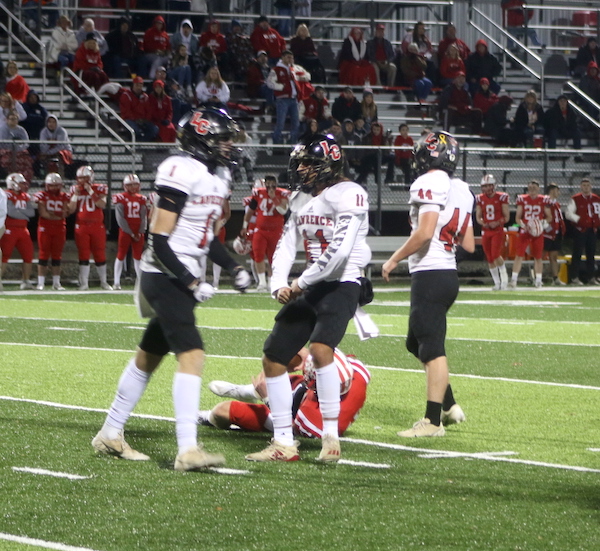 On the Dawgs opening drive of the second half they moved it methodically down the field and were at the three yard line when Blue Fletcher ran it in but a holding call wiped out the touchdown and three plays later it was fourth and goal from the ten yard line and called timeout to talk it over. After the timeout Alex Strickland rolled to his left and threw a strike to a leaping Nick Collinsworth for the score and Logan Southers added the PAT and it was 14-7 Belfry with 6:18 left in the third period.

Click the link below to see both touchdowns by the Dawgs against Belfry.

Just :18 seconds into the fourth period Dylan Ferguson burst through the Pirate front line for a 5 yard touchdown and Southers added the PAT and the game was tied at 14 apiece.

#30 Gabe Barker and #8 Dylan Ferguson combine on the tackle. 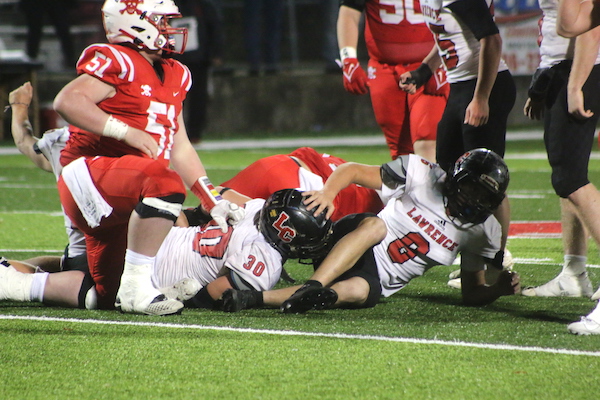 On the next Belfry drive the Pirates went to the ground behind Issac Dixon and took the lead on a Dixon 3 yard run and Ierson extra point to lead 21-14 with 5:54 left in the game.

With their season on the line Lawrence Co. look to tie it up and marched inside the 20 yard line before a holding call made it first and 24 with just under two minutes left. Strickland found Blue Fletcher on a screen pass for ten yards, on the next play Strickland was intercepted inside the ten yard line with :46 left by Braxton Hatfield to end the threat and the ballgame.

Lawrence Co. loses eight seniors but return a bunch of talent and look to build on this eight win season.

Belfry will advance to take on Bell Co. ( 10-2 ) Friday night in Log Mountain. The two teams met for the State Championship in 2019 and are coached by two legends in Phillip Haywood and Dudley Hilton.

“… Tough loss last night. Very proud of our team, there is no quit in them, they did what we asked them to do, which was play every play like the game depended on it. They left everything they had on the field. We just came up a little bit short. They have nothing to hang their heads about.”

“… Sad that our season has come to a close. We are very proud of what we were able to accomplish this season. We will definitely miss the leadership and playmaking ability of our Senior class, but these guys have set a standard for the underclassmen to follow. The future is bright!”