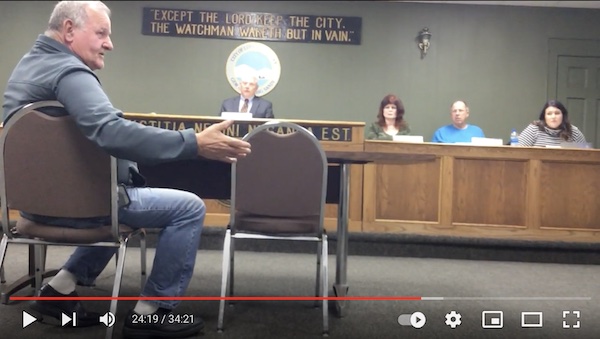 LOCAL PASTOR COMES BEFORE CITY TO AIR GRIEVANCE OF HIS CHURCH BEING HARASSED, AND CONFRONTATIONS WITH “ROWDY NEIGHBORS”

The Louisa city council meeting for November 9, 2021 was held starting at 7 P.M. and lasting for around just under an hour.

Earlier that day before the council meeting, Mayor Slone said that he went to the meeting at the courthouse about the civic groups that are working with their plans for this year’s activities and events revolving around the Christmas celebration next month. Mayor Slone said that they now are planning to issue for the first time ever a calendar that will detail and layover more than a dozen local groups who are going to be conducting their activities in the city for the Christmas holiday season. Mayor Slone stated a lot of people would be surprised how much hard work is done through charity and celebrations of the Christmas holiday season in Louisa, and that he expects this year’s Christmas celebrationsI will make local residents very happy and have a wonderful feeling for the season. Finally Mayor Slone stated that they have not got up the city Christmas celebrations around the streets of Louisa by now like they normally do due to the road repairs around the city but he expected all the city lights will be put up by the city road crews before no later than before Thanksgiving

Next in an unusual move Mayor Slone identified a guest that he had invited to appear and speak to city council about a nuisance issue that was going on in a certain area in the area of Louisa.

The gentlemen, who identified himself as pastor Kenneth Bailey, of the New Haven Church on South Lackey Avenue, came before the council dealing with several issues involving his church and on ongoing dispute about the property of the church against a group of people who live in around very near to the church that I’ve been nuisance issues, threats, vandalism and other problems with care of their parking lot and other activities causing problems for the congregation who attend the church.

Pastor Bailey stated that he’s had multiple conversations with these individuals and that they have also been causing problems with other nearby neighbors of the church as well. He stated he has gone to the county attorney and sheriff’s office about the ongoing problems, but has received little help from them so far about the private property dispute and the other ongoing problems they are having.

Pastor Bailey further state that he and his congregation have become fearful enough for them and the church’s property, that he has installed 24 hour video recording surveillance cameras in and around the church.

Louisa Police Chief Greg Fugitt stated that he knew who the individuals that the Mayor and Pastor Bailey were talking about and that they will be stepping up patrols of the area specially after dark. Chief Fuggitt said these individuals have caused a lot of nuisance and danger issues with their freewheeling and other antics in and around Lackey Avenue area and in other parts of the city, and that numerous tickets and impoundment of their utility vehicles apparently is not dampened their raucous activity.

Pastor Bailey also brought up an issue involving a concrete passage area beside the church, where the church property connects with Lackey Avenue that is causing problems for their parking and people who pass through there. Mayor Slone said that he would come check out the area sometime in the next few days.

In all, the complaint issues addressed by Pastor Bailey to the mayor and city council members lasted around 20 minutes of the council meeting. 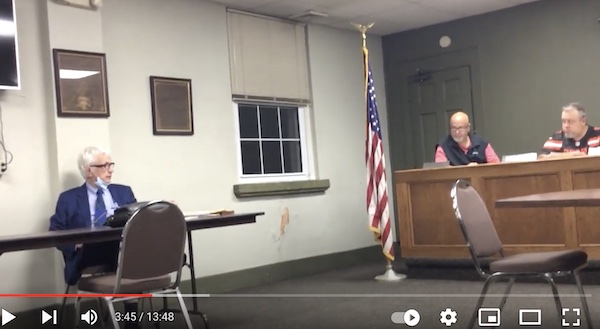 Mayor Slone explained to the council that the city has just two garbage trucks, one picks up residential garbage and one to pick up commercial business garbage. However one of the trucks is broken right now and the other truck is having to be used and it has some wear and tear and it has significantly slowed the pick up of trash all around Louisa.

Mayor Slone said he had recently found out about an identical garbage truck for sale by the city of Louisville, and that it was exactly like the one originally ordered by the city. Mayor Slone said he did emergency declaration to use the money that was approved by the council for the original garbage truck they were going to get, and instead purchased the garbage truck that was for sale in Louisville; but came out ahead as they were able to get the same identical truck which was for $6000 less than they had originally approved for in the original purchase.

The city council unanimously approved the final resolution for the new financial leasing terms of the alternated plans to instead purchase the Louiscille city garbage truck.

Chief Fugitt stated that the first Ford police vehicle that has been ordered by the city is nearly finished with half of the inside equipment installed and that city police force should be getting the cruiser before near5 the end of the year. Chief Fugitt went on to explain to the council that the second cruiser was in the beginning stages of having police equipment installed in and around the vehicle and that they will be receiving the second police cruiser sometime in early 2022.

Mayor Slone said that the sale was for the fact there was very little parking space around the apartments in that area, and that by selling the property to the Housing Authority the lot the city owned but that never got developed liked they originally intended to do, for the parking space would be greatly expanded around the apartments which is sorely needed by the tenants who live the area according to Mary Slone. The city council unanimously approved the resolution 20 21–09 to sell the city property to the Housing Authority of Lawrence County for $7,500.

They both spoke briefly back-and-forth about the illegal parking issue still being done by numerous residents that are still parking their vehicles along the side of the street, which many began doing when the water drain system overhaul began and all through the this over one year long process, which city officials decided to ignore for the length of the project; and now that Lock Avenue has now been repaired and blacktopped, it is illegal to be now parking on the side of Lock Avenue. Mayor Slone say the city police will be starting to issue citations in the morning people quit parking on the side of locked Avenue

Mayor Slone, city council members, and the city’s attorney Eldred “Bud” Adams, all went into a closed room door executive session which lasted around 10 minutes At the conclusion of the closed door meeting city attorney Adams revealed that they discussed a matter involving city personnel, but that no action was taken by the council or the mayor.

Mayor Slone asked if everybody else who was attending the meeting had any further questions, and getting no other responses from the council members or the audience the post executive session was finished in under a minute, and Mayor Harold Slone adjourned the city council meeting at just a couple minutes before 8 P.M.