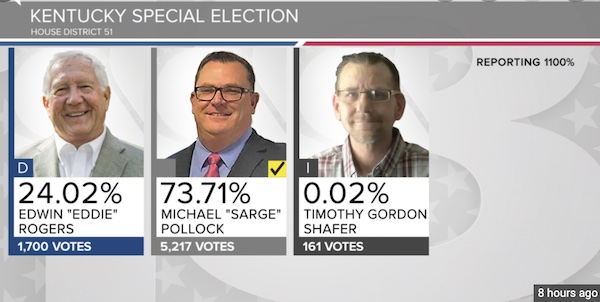 Frankfort, KY – The Republican Party of Kentucky released the following statement on the election results in House District 51:

“Congratulations to State Representative-elect Michael “Sarge” Pollock. He’ll be a great voice for his constituents from Adair and Taylor Counties. Sarge has big shoes to fill after the late Representative John “Bam” Carney – and as a proven business leader in his community who ran a great campaign, we know he is up to the task. We wish Sarge well as he joins the ranks of our GOP supermajorities in Frankfort.” – Republican Party of Kentucky Chairman Mac Brown