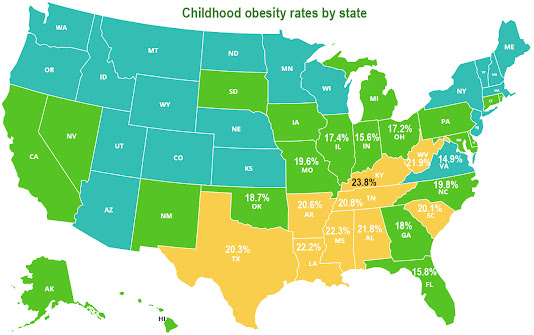 Map from foundation report, adapted by Kentucky Health News to show rates in bordering states and the Southeast

Kentucky Health News
In 2019-20, Kentucky had the highest obesity rate in the nation for children between the ages of 10 and 17, 23.8 percent; almost half again as frequent of the national rate of 16.2%, according to a report from the Robert Wood Johnson Foundation.
“The state of childhood obesity in America is an urgent call to action for leaders at all levels and across all sectors,” Jamie Bussel, the foundation’s senior program officer for efforts to prevent childhood obesity, said in a news release.
Six other states had youth obesity rates significantly higher than the national rate: Mississippi (22.3%), Louisiana (22.2%), West Virginia (21.9%), Alabama (21.8%), and Tennessee (20.8%).
“Obesity is a symptom of deep-rooted challenges that have only been made worse by the pandemic and are a warning sign that our nation’s policies are failing our kids,” Bussel said. “We must make real, systemic change to set kids on a path to better health.”
The report, titled From Crisis to Opportunity: Reforming Our Nation’s Policies to Help All Children Grow Up Healthy, also reports that Kentucky’s 2- to 4-year-old children who participate in the Women, Infant and Children nutrition program rank sixth highest for obesity among the states, at 16.3%, and its high-school students rank fifth.
The good news is that the obesity rate for 10- to 17-year-olds in Kentucky didn’t increase from 2018-19 and that the obesity rate for its high-school students went down in 2019, to 18.4% from 20.2% in 2017.
According to the report, national obesity rates for these age groups have held steady for the last five years, but the news release cites evidence that the coronavirus pandemic may have increased them.
“More recent data support a surge in rates during the pandemic, particularly among younger children,” says the release. “National data from a set of electronic medical records show an increase in the obesity rate for youth ages 2 to 19, from 19.3% in 2019 to 22.4% in 2020.”
Dr. Sandra Hassink, medical director of the American Academy of Pediatrics Institute for Healthy Childhood Weight, summed up how the pandemic has exacerbated the risk factors for childhood obesity.
“Economic stressors, food insecurity, less consistent access to healthy meals at school, combined with increased sedentary time, sleep dysregulation, reduced physical activity, and social isolation have made it harder for families to stay healthy,” she said in the release. “This challenge is compounded by the fact that many of the consequences of obesity—including breathing problems, high blood pressure and diabetes—increase the risks of serious Covid-19 disease. As we look out now and beyond the pandemic, we must create environments that support children and families in sustaining healthy lifestyles.”
The release cites the impact of structural racism on the health of children and families, saying “Racist policies and discriminatory practices affect our food system, access to healthcare, affordable housing, and critical family supports like child care.”
The foundation’s Bussel says in the report, “These challenges are deep-rooted, systemic, and interconnected—but they are not intractable.”
The report says the highest obesity rates are among youth of color and those from households with low incomes. The disparities are significant. In 2019-20, non-Hispanic Asian children had the lowest obesity rate (8.1%) followed by non-Hispanic white children (12.1%). Rates were significantly higher for non-Hispanic Black (23.8%), Hispanic (21.4%), and non-Hispanic American Indian/Alaska Native (28.7%) children.

The foundation details several key policy recommendations to address this issue, including: making permanent the pandemic policy of making school meals available to every student; extending eligibility for nutrition programs, including mothers in the first two years after giving birth and children through age 6; and expand the child tax credit that boosts the lowest-income families.
The national and state-by-state obesity rates among 10- to 17-year-olds come from the 2019-20 National Survey of Children’s Health, along with analysis conducted by the Maternal and Child Health Bureau of the Health Resources and Services Administration.
Obesity is measured by body mass index, calculated by dividing a child’s weight in kilograms by the square of their height in meters. According to the Centers for Disease Control and Prevention, obesity is defined as a BMI that is at or above the 95th percentile for children and teens of the same age and sex; an obese child’s BMI is greater than the BMI of 95% of his or her group.
Posted by Melissa Patrick
ShareTweetShareSendPinShare
Next Post