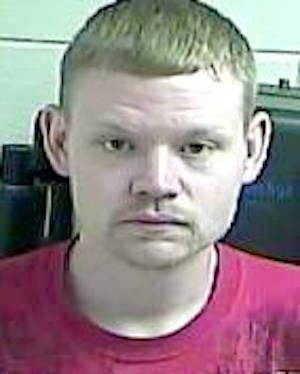 HARDCORE DRUG STORE COWBOY WAS NOT ORDERING PIZZA ON HIS PHONE CALLS: LEONARD BRANDON JOE RICE, 35, OF LOUISA, KY., FACES  UP TO FOUR YEARS IN FEDERAL PRISON FOR DIRECTING ILLEGAL DRUG SHIPMENTS OVER THE PHONE AS PART OF INTERSTATE DRUG RING.
A Lawrence County, Kentucky man pleaded guilty on Thursday,October 14, in federal court in Huntington,West Virginia; regarding his involvement in a fentanyl distribution ring operating in the Huntington area and its surrounding region.

Rice is the first of 18 defendants to plead guilty in a case that saw authorities seize more than fifty 50 lbs. of illegal drugs, 47 pounds of which was fentanyl.

According to the Drug Enforcement Agency (DEA), one kilogram of illicit fentanyl, about 2.2 pounds (33.8 ounces), has the potential to kill 500,000 people.
All eighteen (18) of the defendants were arrested beginning in late July into early August 2021, after federal, state and local law enforcement agencies executed arrest and search warrants in numerous locations in and around both Huntington, West Virginia and Columbus, Ohio.

According to the plea agreement and statements made in court, Leonard Brandon Joe Rice admitted that on May 24, 2021, he used a telephone to arrange the purchase of fentanyl in Huntington. Mr. Rice then traveled from Louisa, Kentucky to Huntington where he received the fentanyl.

When Leonard Rice returned to Louisa, he was stopped by a trooper with the Kentucky State Police.  The trooper subsequently seized the fentanyl Rice purchased.

Leonard Rice also admitted that he had received fentanyl in Huntington from the beginning of 2020 through July of 2021. During that period, Leonard Brandon Joe Rice redistributed some of the fentanyl he purchased in Huntington to other individuals in the Louisa, Kentucky area.

Leonard Brandon Joe Rice faces up to four years in federal prison when he is sentenced on January 18, 2022.

United States Attorney William S. Thompson made the announcement and commended the investigative work of the Federal Bureau of Investigation (FBI) and the Southern West Virginia TOC-West Task Force. The Southern West Virginia TOC-West Task Force  consists of the Cabell County Sheriff’s Department, the Hurricane Police Department, and the Marshall University Police Department, with support from the West Virginia State Police, the Drug Enforcement Administration (DEA) and the Violent Crime and Drug Task Force West.  The Ohio Highway Patrol, the Kentucky State Police, and the FBI and DEA in Columbus, Ohio also assisted in the investigation.

The investigation was part of the Department of Justice’s Organized Crime Drug Enforcement Task Force (OCDETF). OCDETF was established in 1982 to conduct comprehensive, multilevel attacks on major drug trafficking and money laundering organizations and is the keystone of the Department of Justice’s drug reduction strategy. Today, OCDETF combines the resources and expertise of its member federal agencies in cooperation with state and local law enforcement. The principal mission of the OCDETF program is to identify, disrupt, and dismantle the most serious drug trafficking organizations, transnational criminal organizations, and money laundering organizations that present a significant threat to the public safety, economic, or national security of the United States.

GROWING UP IN LOUISA: Common Memories