BULLDOG SENIORS COME UP BIG IN SENIOR NIGHT VICTORY OVER FLOYD CENTRAL, DAWGS WRAP UP #2 SEED IN CLASS 3A DISTRICT 8

Louisa, Ky. — Senior Blue Fletcher scored four touchdowns to lead Lawrence Co. ( 7-2 ) to a 47-7 victory over Floyd Central ( 2-7 ) Friday at Luke Varney Jr. Memorial stadium to clinch the #2 seed in the District and a home game in the first round of the playoffs. 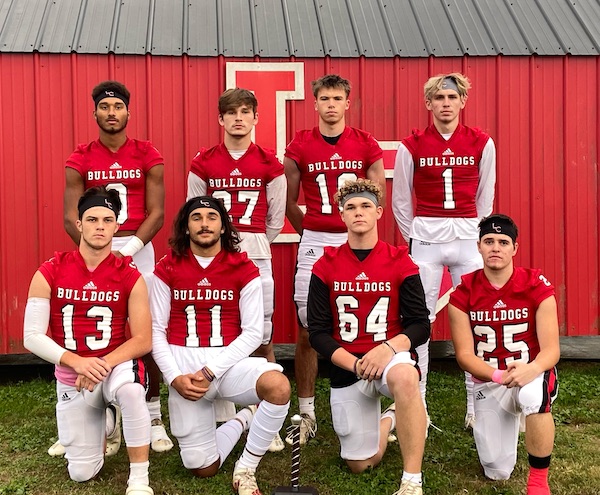 Blue Fletcher put the Dawgs ahead with a 16 yard touchdown run but the extra point was missed and it was 6-0 Lawrence Co.

Fletcher scored his second of the night this time from 54 yards out and Alex Strickland hit Dylan Ferguson for the two point conversion and it was 14-0 Dawgs at the end of the first period.

#13 Blue Fletcher hands the ball to the ref after scoring a touchdown along with #51 Blake Prater. 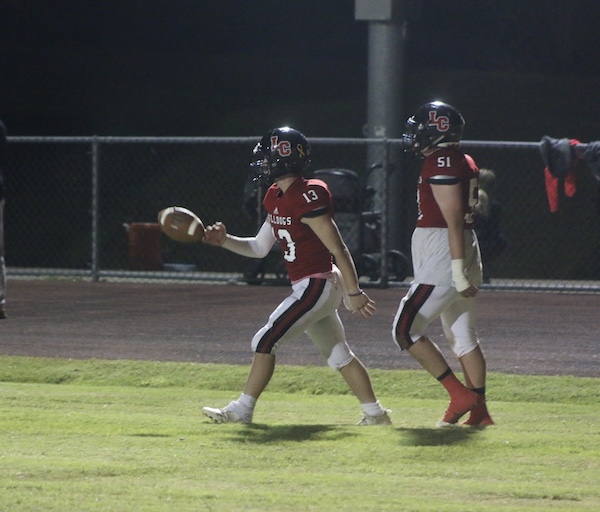 Fletcher made it 20-0 on another 16 yard jaunt in the second quarter.

The Bulldog defense got into the act when Alex Strickland picked up a Jaguar fumble and raced 53 yards for a touchdown and Kaden Gillispie tacked on the two point conversion to make it 28-0 at halftime.

In the second half Dougie Hall scooted in from 3 yards out to make it 34-0.

#9 Dougie Hall cuts off of the block from #2 Kaden Gillispie on Senior night. 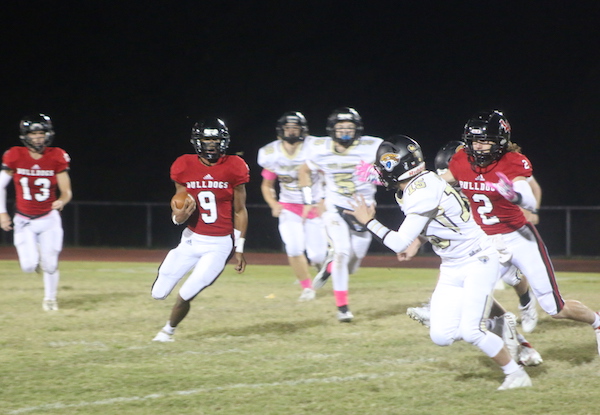 Fletcher finished off his spectacular night with a 12 yard touchdown run and it was 40-0 Dawgs.

Max Martin put Floyd Central on the scoreboard with a 12 yard touchdown run and BJ Peterson tacked on the extra point kick.

Bulldog Lawson Baisden scored the final touchdown of the night on a 20 yard touchdown run and Logan Southers tacked on the PAT to set the final score of 47-7.

The Bulldogs finished with 370 yards with 364 on the ground as Dougie Hall led the way with 149 yards on 9 attempts, Blue Fletcher rushed for 113 yards on 8 carries, Dylan Ferguson 35 yards on 4 carries, Lawson Baisden 29 yards on 2 carries, Alex Strickland 3 attempts for 28 yards, Ryan Marcum 1 carry 9 yards, Ethan Horn 1 yard on 1 carry. 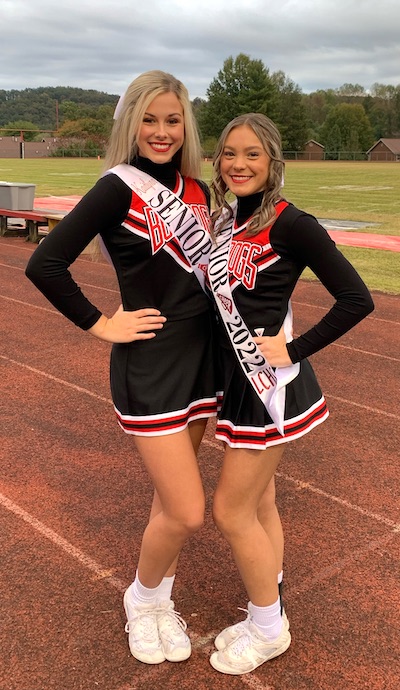 The Dawgs will close out the regular season at Raceland ( 8-1 ) before hosting the first round of the playoffs November 5th. 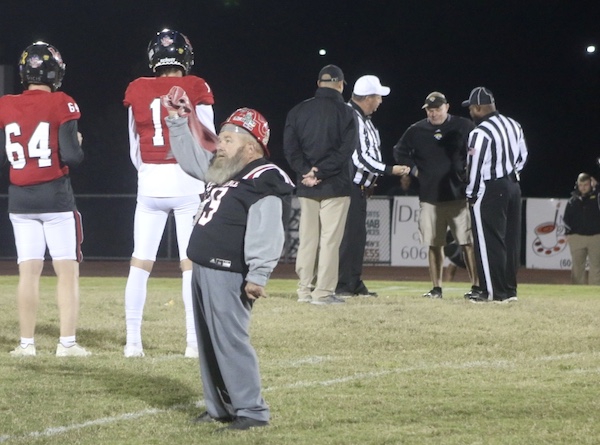 “… Obviously, very happy for our team victory last night. I don’t think you could have scripted it any better for our Seniors. Each player who was honored before last night is very special to our football program and will be missed. Fortunately for us, we aren’t finished and will cherish getting to play the game each time out.”

“… As coaches, we get to watch each of these guys grow over the course of their career, not just as football players but also as people. This group has been a blessing to coach over the last four years.”

“… Offensively very pleased that we didn’t put the ball on the ground, which has slowed us down the last several weeks. I felt that our backs ran hard and we’re not brought down on first contact and our offensive line controlled the line of scrimmage.”

“… Defensively we knew that Floyd Central would try to control the ball and work clock. Early on they had some success with this, however, I believe our depth wore them down as the game went on. Cody Crum got us going with a couple big hits, and then I felt we were able to take over the game. “

“…Pleased to be where we are at this point in the season. We will enjoy last night today, and turn our focus to a huge matchup with Raceland tomorrow.”

Lawrence County Deeds for the week of October 11-22