LOUISA, KY. — OCTOBER’S regular Lawrence Co. fiscal court meeting Tuesday morning started with the usual business and ended with information about the county’s growth during the past ten years.

Here’s a look at the agenda:

Judge/Executive Phillip Carter spoke for the court in issuing condolences to David Pinson’s family after the loss of his mother this past week.

10.  Authorize Clerk to Advertise for FEMA Steel Jobs and Cribbing 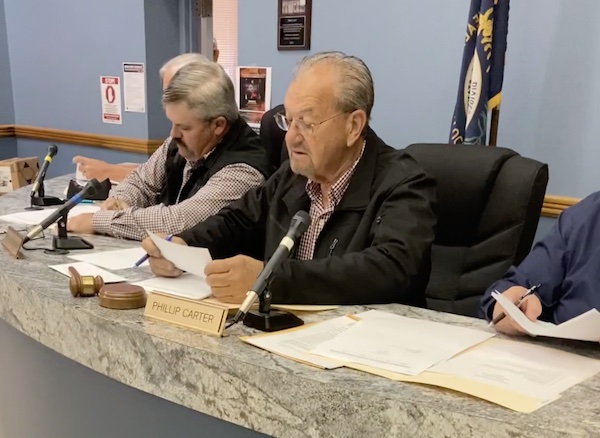 The dozer bidding included only one participant, Amber Lee Contractors, which was for $63,204 on a one year lease purchase plan.

“We’re really proud of the success of our programs especially during this covid-19 cloud we’ve been operating under,” Fletcher said. Assistant Judge /Executive Vince Doty called Fletcher “the best superintendent in the state.”

The 2020 Complete Count Committee went to work last year to encourage the counting of every person possible in Lawrence County and that they did, Pauley-Barker said.

He said out of the six tracts in Lawrence Co. the self reporting rate was an average of 67.95% and the population is set at 16,293, a 2% increase since the 2010 census. Matter of fact, Pauley-Barker said Lawrence is the only county in eastern Kentucky to show an increase.

“The thing I’d like to pass on the the court is the importance of starting immediately on the next ten years,” Pauley-Barker said. “It is so important to get everyone counted.”

He said there will be redistricting of state senate and representative seats next May even though there is a Primary election scheduled at almost the same time. County Clerk Chris Jobe checked on how it will work if a representative get’s his or her district changed would they have to register again for the new district? He got no answer from state officials as to how it will be handled.

Jobe said candidates can begin for file for county offices on November 3 and they can pick up their packets any time since he has them ready.

He also mentioned the public’s opportunity to donated slightly used Halloween outfits to the sheriff’s office to be distributed to some of the families who need them. They are also having a Christmas program to collect toys for the kids. Jackson said his office is looking for families that may need the Halloween costumes and/or the Christmas gifts.