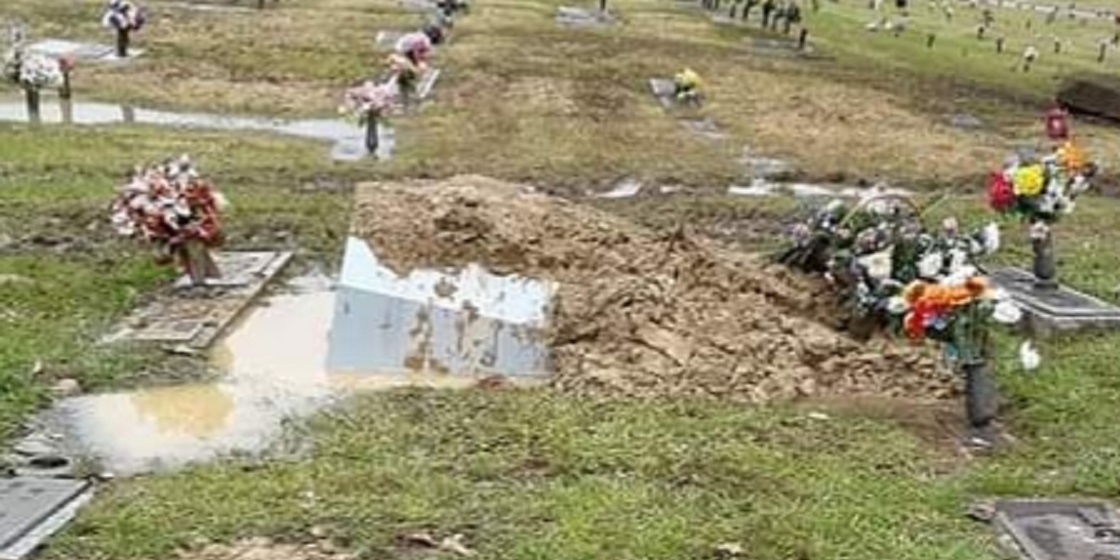 HUNTINGTON – A Cabell County woman is suing a cemetery after her late sister’s casket floated out of the ground just days after her burial.

According to the complaint, Clark died from COVID-19 and was laid to rest December 15, 2020, at White Chapel Memorial Gardens, which is located along U.S. 60 near the Huntington Mall in Barboursville.

“Regrettably, because defendants failed to properly bury Shannon, three days later, her entire casket floated up out of the ground and onto the surface,” the complaint states. “Shocked onlookers stopped and began taking photographs, which were posted online and went viral.

“Defendants could easily see Shannon’s casket floating above the ground, as her burial site is within a stone’s throw of the cemetery’s office. Yet, for unknown reasons and despite lines of cars forming to gawk at the grave protruding out of the ground, defendants did not immediately attempt to repair Shannon’s gravesite until plaintiff and her family forced defendants to do so.”

StoneMor operates more than 300 cemeteries and 70 funeral homes, including 34 properties in West Virginia.

After Clark passed away December 12, her family called the cemetery to make arrangements because she had purchased a plot located between her late husband and son. Employees suggested there might not be enough space to fit Clark in the location she purchased, and they attempted to get the family to buy an additional casket and/or a new plot, “rudely suggesting that Shannon was too fat to be buried in the location the defendants had previously sold her.”

Clark was buried December 15. But three days later, “it became clear that due the defendants’ reckless conduct, Shannon would not be allowed to rest in peace” … “because defendants had recklessly and improperly buried Shannon, her grave rose up out of the ground – inundated in water – in what looked like a scene from a horror movie.”

Before Jones arrived, she says, “Shocked onlookers began stopping and taking photographs of the disturbing scene.”

The casket was removed from the ground on December 19 and left exposed until the next day.

“Plaintiff was told Shannon’s vault was only visible because of recent rain, and defendants had not been able to rebury the vault/casket because the ground was not yet ‘dried out,’” the complaint states.

“In addition, when defendants initially began the process of reburying Shannon, they did not realize that a family member was parked nearby and could listen to their conversations clearly,” the complaint continues. “Specifically, defendants’ employees decided to use a drill to put hoes in Shannon’s vault so that the water would leak in but the vault would sink.

“However, Shannon’s family member spoke up and let them know that he was not going to sit back and watch as they drilled a hole in Shannon’s vault, and the employees agreed not to do so.”

Jones says she and the rest of Clark’s family has sustained extreme mental anguish and suffering, nausea, loss of appetite, loss of sleep, loss of capacity to enjoy life, funeral and burial expenses, extreme annoyance, humiliation and inconvenience.

StoneMor has been sued several times just in West Virginia, most notably in 2020 when a Kanawha County family learned a body had been buried in a plot it purchased more than 40 years ago. The judge in that case ordered the parties to arbitrate the dispute, and the court case was dismissed.

“This isn’t StoneMor’s first rodeo,” Jack Dolance, one of Jones’ attorneys, told The West Virginia Record. “Just Google this massive company. They own cemeteries all over the country, and there are years of news stories, complaints and even online support groups. So many families mistreated, ignored, and disrespected. It’s a disgrace. And they don’t care.

“We filed this lawsuit so a West Virginia jury can send a clear message: We don’t put up with this here. Our loved ones deserve to rest in peace with dignity. And we know from history that a big verdict is one of the only ways that regular citizens, as jurors, can force a big company to change.”

Jones is being represented by Dolance and Bobby Warner of Warner Law Offices in Charleston. The case has been assigned to Circuit Judge Paul T. Farrell.