Louisa, Ky. — The best season in Lawrence Co. Boys soccer history came to an end Monday night with a 2-0 loss to Somerset in the first round of the state tournament at the LCHS soccer complex.

The SoccerDawgs huddle before their state tournament match against Somerset. 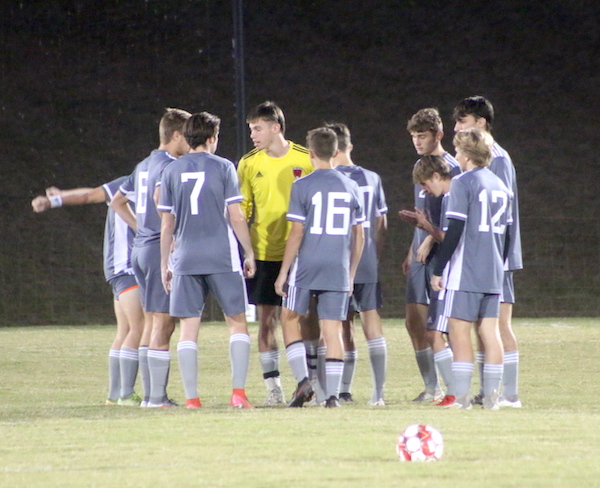 The Briar Jumpers ( 12-5-1 ) scored two early goals to put the SoccerDawgs behind the eight ball but they didn’t back down and battled all the way to the end. Somerset who has won nine in a row made those to two goals stand up to get the victory and advance to the elite eight and will host Covington Catholic ( 12-8-5 ) on Saturday.

Lawrence Co. finishes the season with a school record 15 wins and lost only twice on the field this season.

The Dawgs have only played varsity soccer for four seasons and will look to replace eight seniors who have been with head coach Scott Johnson from the beginning.

#7 Logan Southers looks to strike the ball versus Somerset. 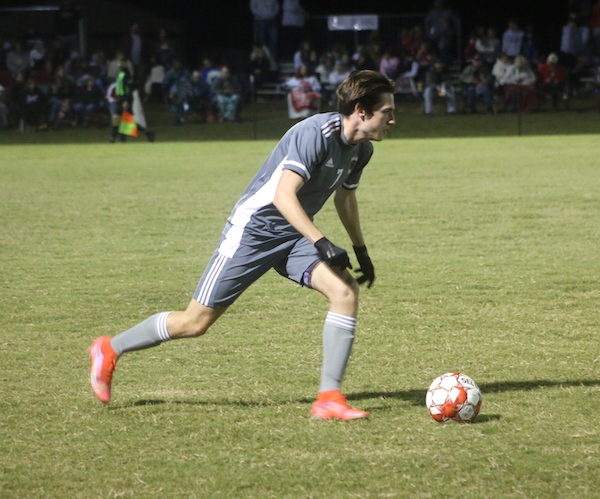 “… These boys have set a great benchmark for future LC boys soccer teams. Although last night didn’t go our way, I am very proud of this group of young men. They got down by 2 goals quickly and didn’t fold. We pressured them for the rest of the match and had a couple of good chances to get back in it during the second half.”

“… It has been a great start for this program at LC. The first goal we set over 4 years ago was to win a regional championship and everything we have done since has been to prepare ourselves for that. We have had a ton of good players over the years, but I knew we had something special with this group. They have been the most experienced class of players we have had and they showed that by beating Prestonsburg to get that regional championship. Every team over the years has worked really hard and has been blessed with players of tremendous character. It has been a pleasure to coach them over the years and I look forward to continuing the tradition.”