#2 Kaden Gillispie hauls in a pass from Alex Strickland to set up the Dawgs first touchdown. 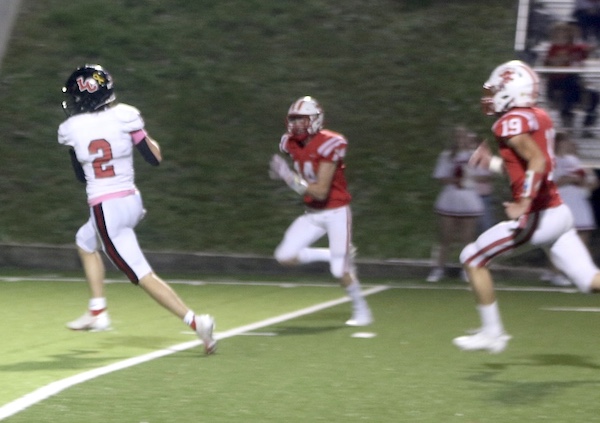 Lawrence Co. dented the scoreboard first on a Dylan Ferguson 1 yard touchdown out of the wildcat formation, Logan Southers tacked on the extra point. The touchdown was set up by a 48 yard reception from Alex Strickland to Kaden Gillispie.

Click on the link for both Dylan Ferguson touchdowns.

Belfry answered to make it 7-7 on a Caden Wollum 1 yard touchdown run, Gideon Ierson added the point after.

After a Bulldog turnover on downs gave Belfry a short field the Pirates made it 14-7 on a Neal Copley 2 yard plunge and Ierson PAT with 3:32 left in the first period.

About halfway through the second quarter the Dawgs pulled within 1 point at 14-13 on another Ferguson 1 yard touchdown but Southers missed the PAT.

Belfry made it 21-13 as Issac Dixon made his way into the end zone from 11 yards out and Ierson tacked on the extra point with 1:51 left in the first half.

After another Lawrence Co. turnover on downs at midfield Belfry made it 28-13 on another Dixon touchdown and Ierson PAT with :25 seconds left in the half.

In the second half Lawrence Co. couldn’t get much going and Belfry outscored them 14-0 on two short touchdown runs from Dre’ Young and two extra point kicks from Ierson. 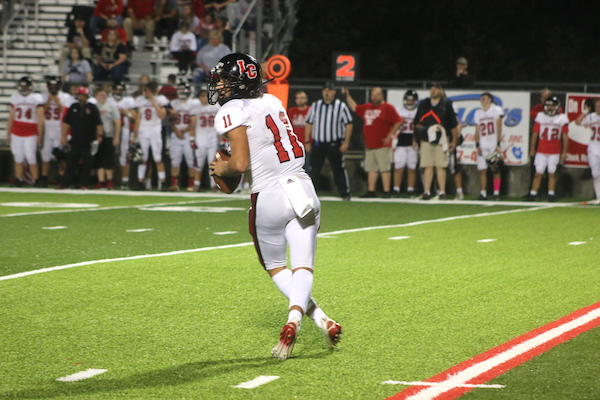 The Dawgs will wrap up District play on Friday with a home game against Floyd Central who is 0-3 in District action. If the Dawgs win they will host in the first round of the playoffs on November 6th.

“… Not the result we wanted. We fully expected to win last night. Proud of how hard our kids played. Hopefully, we will get another chance to play that team in the playoffs.”

“… Don’t let Belfry’s record fool you. That is a very good football team, that has played an extremely challenging schedule, and is for sure a contender in class 3A.”

“… Isaac Dixon is a special athlete for them. I thought we got our hands on him several times, but we gave up to many yards after contact.”

“… Offensively, we knew their front would pose some problems for us. Very encouraged by what we were able to do in the pass game. Kaden Gillespie, Nick Collinsworth, and Alex Strickland did a great job in the throw game. Hopefully we can continue to improve in that phase.”

“… Going into the game, we knew we would have to take some chances to win the game. Wish we would have been able to convert on 4th down right before the half.”

“… Overall, wish the end result would have been different, but proud of the efforts of our team. Hopefully we will continue to improve and get another shot at them in about a month.”