GROWING UP IN LOUISA: Halloween or Harvest

I suppose we owe more recent October behaviors of having a licensed time to misbehave to the ancient druids over the pond in Europe. My reading tells me they were of the habit of running around in costume causing fear, worry, and utter despair under the glow of a full moon. It appeared that society was breaking down. Who would guess that centuries later it would be more about candy and fairytale fantasies of pretense of being someone other than just being a kid?

As in all things, history is more complex than setting aside a date on the calendar to party and run amok. It 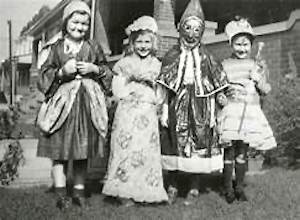 would have been impossible just a few generations back to dress in fancy ‘star-wars’ costumes and go into the darkness of the chilly, October night with light sabers in hand. First of all, the costumes of days gone by were more the product of mom’s Singer sewing machine. Old worn out sheets were tossed over our person and holes were cut to allow us to see where we were going. Very few folks issued candy when the demand ‘trick or treat’ was given by the toddler or kid. The cost and general availability of sweets had not yet evolved beyond perhaps an apple, homemade cookies, or hard-rock candy made by loving hands. While the five and dime store may have carried a few masks and some candied corn, many families just out of the depression and the restrictions of rationing for the war, had little to spend on such a wasteful product. If someone didn’t have a gift in response to the trick or treat, we also carried a bar of soap to use on their windows.

Whether it was wise or not, given family finances, I remember my mom bringing home a one-piece outfit complete with a cotton-gauzed mask so I would meet the social expectations at a party hosted by the parents of a friend. We bobbed for apples and had other treats (homemade) after we had chased each other around in hopes of figuring out who was behind the masks. It is likely that prizes were given for the best costume. I’m guessing the ‘store-bought’ took home the prize. I remember that in most years I had helped design my outfit based upon Movie Stars roles and whatever clothing I had that could be modified. Sometimes western, sometimes spooky, but always our best efforts, we hid behind them for a time and become someone else. 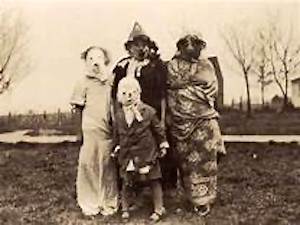 Haunted houses came along during our growing up. I know I actually worked on designing and operating such a house when I was a young man. It was fun to funnel herds of little kids past open coffins, heavy cobwebs and mazes of dark halls that would suddenly be lit flashing the face of a demon of the underworld. We had meat bones hanging like curtains and designed ramps that kept folks off balance and insecure.  We put a guy in a Dracula dark suit and put him in a pine box, meant to be a coffin. He held a flashlight that once turned on would not only lite his face but cast long, spooky shadows. Screams were our reward. While fun, it was a better activity for the ‘dark side.’

Finally the merchants of Madison Avenue figured out that while Christmas was the money maker of the fiscal year, and that Easter was big on chocolate eggs and bunnies, Halloween had potential, too. Up until then the small corner grocery stores had penny candy such as jaw breakers, gum, horehound, rock/sugar candy, but now it became time to have syrup-filled pumpkins, candy corn, Sugar Daddy and Sugar Babies, and the ingredients for popcorn balls, candied apples, and other goodies such as Reese’s Cups or gum. The candy market had been growing because of the candy counters at the local theaters, but now candy had a holiday of its own! I’m guessing they may have sold a few bars of soap, too.

I remember seeing sweet little girls dressed like angels complete with sparkly halos. Whether cowboys or cowgirls, ghosts, soldiers, pioneers, monsters, or even preachers, all had a bag to collect huge amounts goodies. It was years before we were informed of the dangers of some spiking the booty with razor blades or poisons. Parents immediately had to inspect the night’s wages to insure everything was safe to eat. Suddenly, homemade stuff was tossed in favor of a factory-wrapped treat that could be less likely to harm their little ones. 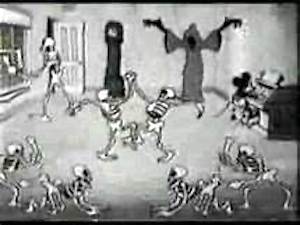 The Halloween night trips around the neighborhood also spawned the practice of licensed vandalism. I know that since my Aunt Shirley was a teacher, our house often became the target for some tricks. For example, teens roaming the streets tossed dead chickens on our porch. The adults washed away the blood and disposed of the feathered corpse, but we wondered ‘why?’ One time a highway stop sign was thrown through our living room window. The heavy metal sign knocked a hole on the edge of our TV, but the TV itself wasn’t harmed. As it was we had broken glass and wood all over our living room. Thankfully, no one was in the living room at the time or serous personal harm may have resulted. The Sheriff never found out who it was that performed the dastardly deed.

At some point rioting crowds gathered in major cities and destroyed homes, businesses, and in some cases, lives. I think Detroit was one of those, but I don’t remember the details. Designed to provide fun and to increase sales, a segment of folks turned to evil doings. It reminds me of other formally good activities that have been turned into an event to garner fear and hatred. It’s a shame.

In answer to this many churches and organizations, including schools have worked to turn Halloween into a time to celebrate Harvest and to enjoy this time of the turning of the leaves. Full moons are lovely enough without requiring witches on broomsticks or stirring their caldrons. Snow White does not need any more poison apples. A plate of brownies will do nicely, thanks.

Yes, I remember the good times and cannot help but believe we should be about making ‘good’ memories. Certainly, bad happens, but it should be our goal to look for ways to fill the lives of our children, grandchildren and great grandchildren with worthwhile and positive remembrances that they can pass on to future generations.