DAWGS START GAME WITH A BANG AND ROLL TO DISTRICT VICTORY, BELFRY UP NEXT 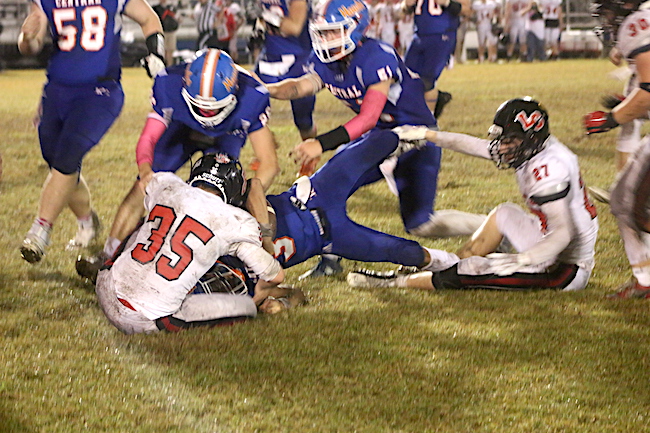 The Bulldogs led 7-0 at the end of one quarter on the Collinsworth touchdown and Logan Southers extra point.

In the second quarter Lawrence Co. padded their lead on a 25 yard touchdown by Dylan Ferguson and Southers made it 14-0 with 7:48 left in the first half.

Dylan Ferguson goes into the end zone untouched for a 25 yard touchdown run. 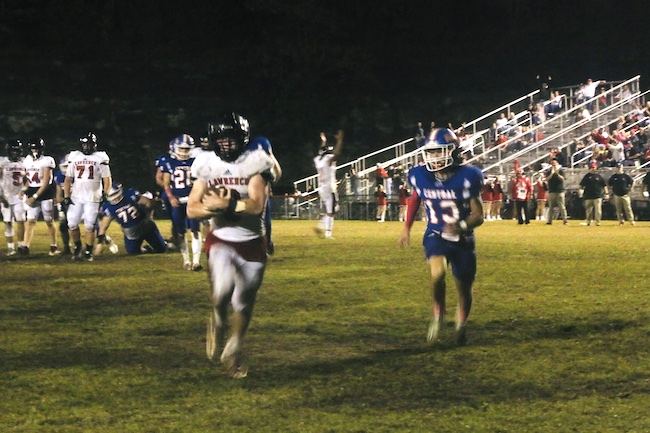 Right before half the Bulldog defense forced a punt and on the first play of the ensuing drive Alex Strickland hit Nick Collinsworth in stride for a 49 touchdown pass. The extra point was blocked and the halftime score was 20-0. Click on video…

After a Bulldog turnover Matt Anderson made his into the end zone for a 12 yard touchdown run but the Dawgs stopped the two point conversion and it was 20-6 LC with 8:33 left in the third period.

On the ensuing kickoff Kaden Gillispie took it back inside the 20 yard line and Dylan Ferguson finished the drive off with a 12 yard touchdown run and Blue Fletcher tacked on the two point conversion and it was 28-6 with 7:20 left in the third quarter. Click on video…

After a Pike Central punt Alex Strickland found Kaden Gillispie who weaved his way for an 80 yard touchdown to make 34-6 with 2:19 left in the third.

After another Hawk punt Dougie Hall found pay dirt on a 46 yard jaunt and Blue Fletcher once again added the two point conversion run and the running clock was started right before the fourth quarter with the Dawgs leading 42-6.

The Hawks fell to 3-5 and will travel to Magoffin Co. for a District matchup next Friday.

The Bulldogs will play for the Class 3A District 8 championship next Friday night at Belfry ( 2-5 ) who was off this week.

Coach Alan Short talking to his team after improving to 6-1. 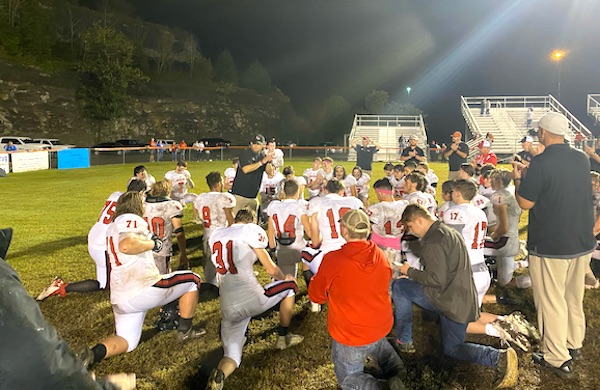 “… Just a great play by Nick Collinsworth to open the ballgame, You know I will have to look at the video to see how well we executed our blocking assignments, but that kid’s been waiting for a touchdown for a long time and certainly very happy that he got it particularly on the first play of the game.”

“… One of these days we’ll figure out a way to start and finish, we had a really good week of practice this week. Unfortunately, sometimes the ball bounces wrong and as much as we as coaches want to execute it a hundred percent, these are still high school aged kids. I’m certainly very, very proud of them for their efforts. It’s not easy to come up here and win, but one day we’ll get a complete game in. Coach Botkins had a great plan. They had a good look all week because those two kids Boykins and Anderson in their backfield are as talented as anybody that we’ll see in Kentucky this year, but just very proud of our defense and our team in general. It’s not easy to come up here and win.”

“… Alex and Nick those have worked on that for probably three different weeks. We haven’t had to use it too much up into this point, very pleased with their execution on that play. We protected it upfront. It was a good play at a good time right before half.”

“… Next week it could be really special you know, you’re playing for a district championship on Pond Creek. And I don’t know when the last time Lawrence went up there and won. I know it’s been a little bit, man. It’s going to be a great matchup. It’s been a long time, quite honestly, I haven’t watched anything Belfry. But obviously with the history and tradition that that program has, you know, it’s going to take a special week for us in practice and in preparation, but there’s no doubt that this is a special group and very excited to take this team up there next week. But we’re going to enjoy this one tonight and we’ll turn the page to Belfry tomorrow.”

“… I mean, it is for a district championship. I’m sure their fans will be excited and hopefully we’ll take a bunch up there and play the best game that we can possibly play.”