CARTER ANNOUNCES PLANS TO RUN FOR THIRD TERM IN ’22

Files intent to run in Frankfort 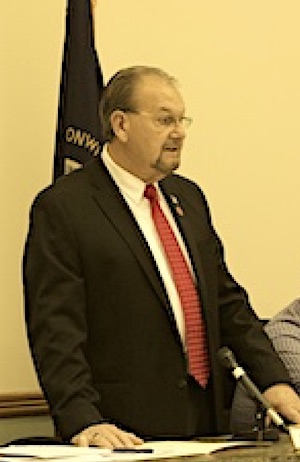 Judge Executive, Phillip Carter said, “It has been my pleasure to serve Lawrence County and its citizens, and it is my hope that the people of Lawrence County, will allow me to serve another term.”

For the past three years Judge Carter has worked diligently to help improve the quality of life for the people of Lawrence County. During this time, Judge Carter has made it a priority to always put kids and families first.

These past three years have seen many accomplishments which include two new parks for families to enjoy and plans to revitalize existing Lawrence County Parks in Blaine, Chapman, Fallsburg and Yatesville.

During this time there has been improvements made to the roads in Lawrence County with 25,000 tons of new asphalt laid. The largest amount in a three-year period.

The E-911 center has received $300,000.00 in grants during this time to upgrade the equipment to a more modern standard which directly helps the E-911 center be more efficient. This directly benefits our county residents of Lawrence County when an emergency arises, and an emergency E-911 call needs to be made.

During the last three years, Judge Carter has overseen four nationally declared disasters (3 Flood and 1 Ice Storm). In addition to those disasters, Judge Carter has worked for Lawrence County throughout the Covid-19 Pandemic by working with local, state, and federal officials and agencies to help protect Lawrence County residents and ensure the people received the necessary support and aid to recover from these disasters.

Lawrence County has seen many improvements the last three years which will help make Lawrence County a more desirable place to live. This can be reflected by Lawrence County being the only county in Eastern Kentucky to have a population increase with the new census.

Judge Executive Carter believes this is only the beginning of the success of Lawrence County and announcements for new projects and new jobs in Lawrence County will be announced in the upcoming months.

PAID FOR BY CANDIDATE