HE SHOOK MY HAND AND SAID, “I’M JIM MATNEY, IT’S NICE TO MEET YOU”…

Coach touched so many lives…including mine

In the fall of 1988, as best as memory recalls, I began writing sports for a weekly newspaper in Martin County, Kentucky. My first assignment involved covering the Sheldon Clark Cardinals, playing under the lights that Friday night, at a field appropriately named, “The Rock”.

My press pass and camera afforded me the privilege of a bird’s eye view of the action. I was allowed to pace up and down the sidelines with the players, the chain crew, the line judge, and thankfully, Coach Jim Matney.

I had not met the fiery young coach of the Cardinals prior to the game. I could see right away, he was indeed fiery. And full of enthusiasm, and spirit, and a belief in his young charges.

Arriving at the game a bit early, I had no real expectations of gaining access to the coach prior the game. Certainly he would be too busy for some guy coming to watch his alma mater play football for the first time, claiming to have the ability to give a proper accounting of the coach and his team. But after building up a nerve, and waiting for just the right moment, there we stood, face-to-face.

I introduced myself as he shook my hand and said, “I’m Jim Matney. It’s nice to meet you.”

As time would prove, meeting Coach Matney would leave a lasting mark on this guy who grew up on a farm on Turkey Creek.  He quickly gained my respect as a coach, a teacher of life’s lessons, and a man who proved time and again, his players were “his kids,” his priority.

When Coach Matney first arrived at Sheldon Clark High School, he was greeted by Principal John (A J) Haney. The former principal recalled, “The first day I met him, we were talking about players that would be returning that year, equipment we had, and such. I asked him how many games are we going to win this year.”

“We hadn’t won a single game the previous year,” Haney acknowledged. “His first season we didn’t win a game. But we knew we would soon be winning many games.”

The first game I attended, the Cardinals did win. The following morning I called the coach at his home. I needed comments and statistics for the game. Coach Matney was generous with his time. He was gracious when it came to talking about “his kids.” When I asked for stats he said, “We don’t have anyone keeping official stats.”

I soon put together a homemade spreadsheet of sorts. I began keeping stats. On Saturday mornings that followed, we enjoyed talking about accomplishments of his kids. He was never a big fan of individual stats. “The scoreboard is the most important stat,” he once told me. “And it tells us what we did as a team”.

So for the next eight or nine years, Friday nights in the fall were spent pacing the sidelines with Coach Jim Matney and his Cardinals. Saturday mornings were spent on the phone discussing Friday nights action.

To this day, I’m not sure which of us enjoyed those football seasons more. Probably me. There was no pressure for me, just the joy of watching develop a group of young men into a team of winners. 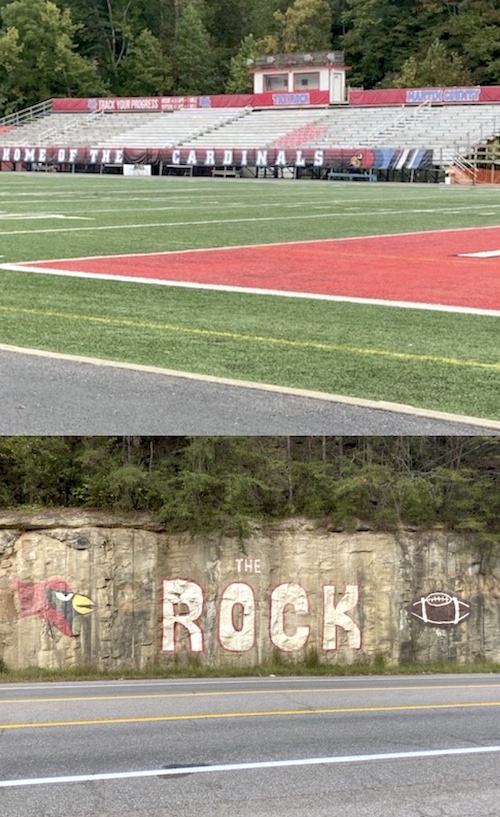 Between that first game in 1988, and when life pulled me away from Martin County some nine years later, Coach Matney introduced all of us to high school wrestling. “Coach” began the program without mentioning it. Eventually, the parent of one of the wrestlers asked when the paper would begin covering the young program.

When I approached him about the program, Coach Matney kind of shied on the subject. “We are just getting started,” he said.

“When you have a home match, I would like to cover it,” I explained.

“We only wrestle on the road. Mostly we travel out of state. We seek out tournaments with top notch programs. To be the best, you have to wrestle the best,” Coach said.

But there was also another problem that kept Sheldon Clark from wrestling at home. They did not have a wrestling mat. They practiced by taping together tumbling mats. Soon, Chris Goss would become the Cardinals first state champion, winning the title in the 160 pound class.

Soon thereafter, Sheldon Clark High had a wrestling mat. Names like Stepp, Jude, Deskins, and others would become feared on the mat. The Cardinals would win a pair of state titles, crown several individual state champions, and find themselves ranked among the nation’s elite 25 high school teams in 1995.

Principal Haney recalls, “The first year they won the state championship, there was a 16” snow in February that year. I went by the school, and while I am there, here comes Jim and (wife) Debbie rolling on the parking lot in four-wheelers, bringing wrestlers to practice. That was the kind of competitor he was.”

With support from Clay Wells, Bill Bo Davis, and others, Sheldon Clark became the home of the “Marine Corps League Wrestling Tournament”. An invitation to compete in the two-day event meant you were among the best in the state.

Then the day came when Coach Matney departed for Johnson Central. As Mr. Haney put it, “We hated to see him go, but he made the right choice. We were not prepared to provide the facilities he needed to take the program to the next level. But our friendship remained.”

Admittedly, and sadly, I lost touch with Jim Matney. I moved away, and he found his calling at Johnson Central. Although he didn’t know it, I kept up with his teams at Johnson Central. Each week in the fall I would check the KHSAA web site for scores of both the Cardinals and the Golden Eagles. Keeping up with one because of hometown pride, the other because of a dear friend.

Of course Jim Matney and his Eagles did just fine without me on the sidelines. And I took pride in knowing kids from the mountains were still becoming champions under his direction.

I have listened to an inspiring speech he once gave his Eagles. It can be found on the web if you look for it. He explained how proud his kids should be about their mountain heritage. He explained how big city folks poke fun, but when they retire they seek out the peace of a hollow.