GROWING UP IN LOUISA: Coal: Blessing or a Curse?

Coal: Blessing or a Curse?

To introduce this story let me point out that Kentucky and West Virginia, as well as other sections of America, have an important history involving coal mining. With the industrial revolution gearing up in the late nineteenth century coal was a hot commodity (no pun intended). It was used to fire the furnaces in the big steel mills, and for fueling the locomotives that ran on the tracks connecting the nation. The foundries and blacksmith shops were regular customers, and new markets for the fuel that were developing overseas. Coal was king at the turn of the century and the decades that followed, but not without cost.

When coal was first introduced as a fuel for rising industry, the poor landholders were duped into selling mineral rights for what seemed to be a landfall profit. Once the coal fields were bought up the barons opened mines to remove the coal they now owned. Mines both large and small offered jobs and paid the workers in Company script good only in the Company stores. The pay for working and the expenses of living never really matched. I remember Tennessee Ernie’s hit from 1955, “Sixteen Tons,” wherein he laments his predicament.

My memories are not of any direct personal involvement with coal. I was merely a kid, growing up and hearing of the experiences of others. After all, we had small mines around the county, but the big mines were further south in places such as Pikeville, Harlan, Hazard, and Jenkins, deep into the big mountains. I saw coal trains heading north, fully loaded with the big black rocks, but except for a little spillage of small chips along the tracks I had little to do with the product. During my 13th year I lived for a spell in Detroit, Michigan in an apartment building. I had a job to help the building superintendent load coal into the big furnace and to remove ashes including the hard slag, a by-product that built up daily.

I remember once buying a bag of coal and putting some in a wood burning stove. I had been cautioned that coal would burn hotter and could damage my cast iron stove. The thing I remember most was when the coal ignited there was an odor that brought back memories of a time when one of my aunts cooked on the coal-burning kitchen stove. Like Pavlov’s dogs I began to salivate in anticipation of a wonderful feast. Sadly, that meal didn’t materialize.

I remember during my school years that I would hear of one disaster or another when mines exploded, carbon monoxide seeped into its chambers, or supports collapsed. Anxious wives and children would stand in the cold waiting for news of husbands and fathers. One of my uncles was a traveling ‘coal town’ doctor, who was kept busy treating the various ailments, including the dreaded black lung disease. In spite of the size of the coal industry it was the owners that made out. Some, including the railroaders that worked with them made unbelievable fortunes. Sadly, the local workers found themselves in hock to the company store. Among the workers poverty was absolutely astounding, but it was all they had. 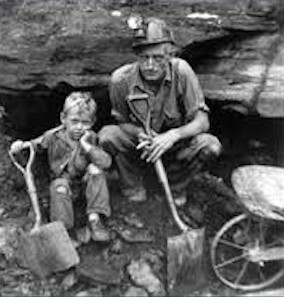 Children as young as eight were used as breakers and some went into the mines to work alongside their fathers. The commercial mines had rails, tipples, and drills, all of which helped, but gave place for accidents. The smaller independent operations usually had to do all the digging and blasting by hand. Thanks to the publicity and collective bargaining many things improved for miners, but the work was still hard and dangerous.

Can you imagine an eight year old back in a mine shaft and watching blasting operations? If one of my kids had done that I would have thrown a fit. Still, when growing up we all flirted with danger. Whether it was fishing on the Tug in the swift water off a concrete structure at Saltpeter, or driving cars up steep mountains, riding a tractor around a steep hill, swinging on grape vines out over a creek, riding waterfalls, or even testing some ‘life everlasting’ or a swig of white lighting, we all took chances. Some of us more than others, but somehow we survived.

Now, thanks to environmental concerns that coal does not burn cleanly, industry is replacing coal with other fuel sources. Most of what is gathers is destined to be shipped overseas. As sales drop, so does the income that modern miners can earn. Poverty grows and the common family suffers.

There were also those small mines that were in use only to provide a farmer with heat. I was sent such a story from a reader who was a former Fort Gay resident, Mr. Martin L. Artrip. (I ran this story with his permission back in 2015, but have lost touch with him since. It is possible he may have passed) I think there are more readers that can identify with the experience described and maybe saw the value of catching these tidbits of history for posterity. I am pleased to repeat the story:

“My uncle had a small coal mine on his property, of which he could dig coal for his own use only, due to not owning the mineral rights. His place was across the creek from our place on Upper Stone Creek, Glenhayes WV, and the mine was located several hundred feet up the hill from his house.

He had five boys, so I spent a lot of time with them, causing me to be around when their dad would have to dig some coal. The mine was probably some forty or fifty feet back into the hill, and he had timbers placed at intervals back to the face of the coal.

The process of getting the coal out of the mine consisted of using a coal auger (maybe 2 inches in diameter) to drill holes into the coal. Once this was done, it was time to place a charge into each hole. He used black power that was rolled up in paper, and looking like a big cigar. This was then placed into the hole, and shoved back to the back of the hole with a ramrod. I don’t know just how many loads he would use per hole, or exactly how deep the holes were drilled, probably only a couple of feet.

We could hear the explosion, and after giving time for the smoke to clear, would go back in, and see how much coal was ready to be moved outside, using a wheel barrow. That’s how I remember it from about 1937. I was eight years old then.”

When we think back to those foggy memories of growing up, a kind of nostalgia rushes in that makes them almost romantic. We bask in those thoughts and smile knowing that we have survived and experienced what life has to offer. That’s the fruit of getting old. My experiences are rarely quite the same as yours, but a commonality exists nonetheless. We rise out of the same generation or one of its near neighbors. Even if you are a young whippersnapper, we are all brothers and sisters when we share our memories. Maybe you have memories of coal mining or perhaps using coal for heat. If so, add a comment we may all enjoy.

PS:  I was contacted by a reader to see if I had any pictures of their ancestor’s pet shop that was on either Water Street or Vinson. It was owned by Margaret Gayle Russell (later Blankenship). Anyone with any memories or photo’s of the shop can help the reader fill in some family gaps. Either respond as a comment to the article or send me email and I’ll pass it through. Thanks.