Louisa, Ky On Homecoming night it was Lawrence Co. ( 4-0 ) racing to 43-14 victory over Magoffin Co. ( 3-1 ) in the District opener at Luke Varney Jr. Memorial Stadium Friday. 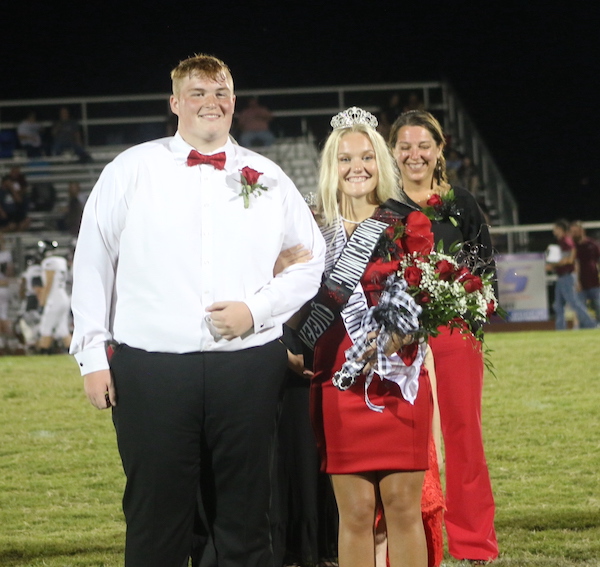 The Dawgs jumped all over the Hornets and led 36-0 with 8:20 to go in the first half to invoke the running clock the rest of the game.

QB Alex Strickland put the Dawgs on the scoreboard with a 15 yard run, the PAT kick failed and it was 6-0 with 9:13 to go in the first quarter.

#13 Blue Fletcher flips the ball to the referee after scoring one of his two touchdowns in the District win over Magoffin Co. 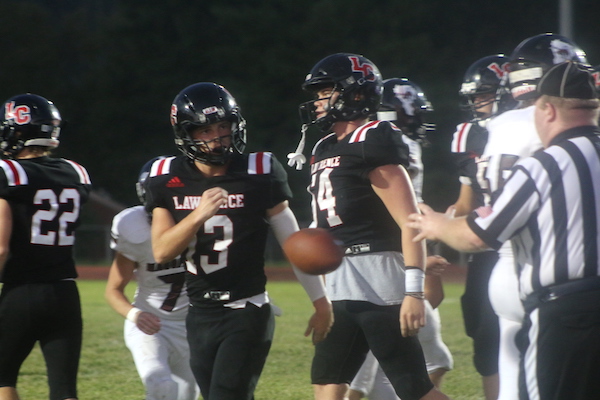 With 6:57 left in the opening frame Blue Fletcher went in from 5 yards out and Kaden Gillispie ran in the two point conversion to make 14-0.

Just 9 seconds into the second quarter Dylan Ferguson found pay dirt from 16 yards out and Logan Southers tacked on the extra point to make it 21-0 Lawrence Co.

Dougie Hall scored from 1 yard out and Southers scored the two point conversion to make it 29-0 with 10:39 left in the second.

Bulldog kicker Logan Southers picked up a bad snap on the PAT try and goes in for the two point conversion. 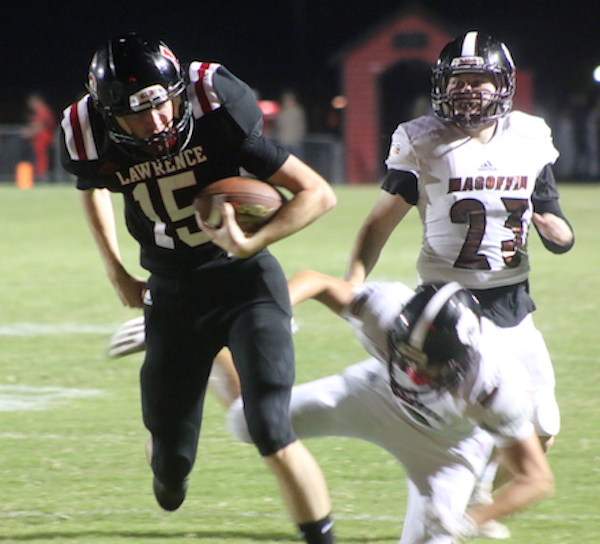 Blue Fletcher scored his second touchdown of the game this time from 10 yards out and Southers made it 36-0 with 8:20 before halftime.

With 42 second left in the first half Lucas Litteral hit Aden Barnett for a 5 yard touchdown to set the halftime score of 36-6.

In the fourth quarter Litteral connected with Barnett once again this time for a 42 yard touchdown and Ben Lafferty ran in the two point conversion to make it 36-14 with 10:55 to go in the ball game.

Dougie Hall scored his second touchdown of the game on a 13 yard run and Southers kicked the PAT to set the final score of 43-14 with 6:35 left.

Dougie Hall gets the corner on a nice run. Hall scored twice in the Dawgs victory. 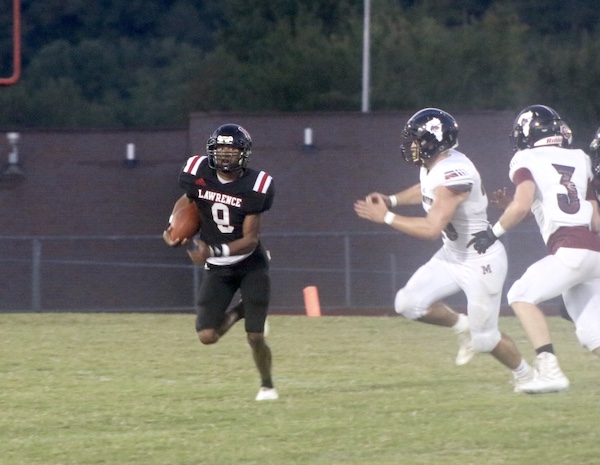 Strickland was 3 of 4 passing with completions to Nick Collinsworth for 39 yards, Kaden Gillispie for 19 yards and Blue Fletcher for 0 yards.

The Bulldogs will return to action next Friday night at home when East Carter ( 3-2 ) comes to Louisa.

The Hornets will travel to Pond Creek to face winless Belfry ( 0-4 ) in another District matchup.

“… So proud of our guys for coming out doing what they needed to do. Homecoming week is so special at Lawrence Co. and with activities all week it can be draining but they out that aside and came out ready to play from the get go. To invoke the running clock in the second quarter was something that we needed to do. So glad we could get everyone some action last night. We still have some stuff to clean up but the good thing is it’s all correctable stuff. Also couldn’t be more prouder if the older kids for stepping up and helping when the game got out of hand. It shows true character for them to do that.”

“… Our defense was good once again they have three really good players and we contained all three pretty good. Felt great to get a victory on homecoming and get our first District win as well. We have a special group of kids that have done everything that we have asked them to do.”

“… We didn’t get to run many plays tonight but we made the most out of them, close to 11 yards per play is outstanding. We will enjoy this one and then turn our attention to East Carter who comes calling next week. They are coached by Tim Champlin who does a great job there and he’ll have those kids ready to play. It will be a challenge for us.”

GROWING UP IN LOUISA: Telephones, the Good and the Bad.