Louisa, Ky. —  In a matchup of Class 3A top ten teams Lawrence Co.( 3-0 ) remained perfect with a 39-28 victory over Russell ( 2-2 ) in the Septemberfest Bowl Thursday at Luke Varney Jr. Memorial Stadium.

#8 Dylan Ferguson and #13 Blue Fletcher after Ferguson crosses the goal line for one of his three touchdowns in a win over Russell. 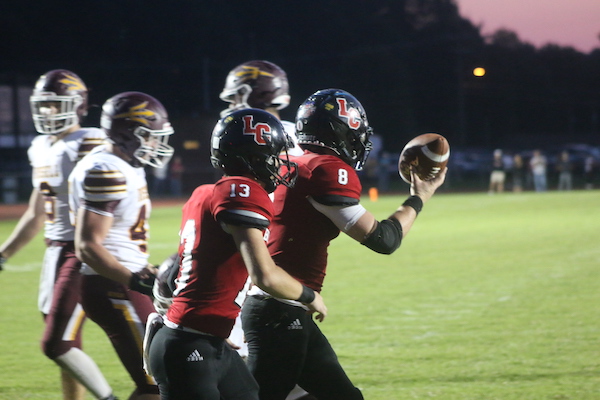 Russell opened up the scoring with a defensive touchdown when Strickland was intercepted by Eligh Abdon who went 2 yards into the end zone for a 7-0 lead after Nathan Totten tacked on the PAT with :49 seconds left in the first quarter.

The Dawgs tied it up with 8:48 to go in the first half on a Dylan Ferguson 2 yard touchdown run and a Logan Southers extra point kick.

Lawrence Co. took the lead for good just a minute and half later as Strickland intercepted a Red Devil pass and scampered 52 yards to the end zone to make it 13-7.

Lawrence Co. wasn’t done scoring in the first half as Kaden Gillispie made a great adjustment and then raced into the end zone on a 47 yard touchdown pass from Strickland to make it 19-7 with just over two minutes left.

#2 Kaden Gillispie stretches the ball over the goal line on his 47 yard touchdown pass from Strickland. 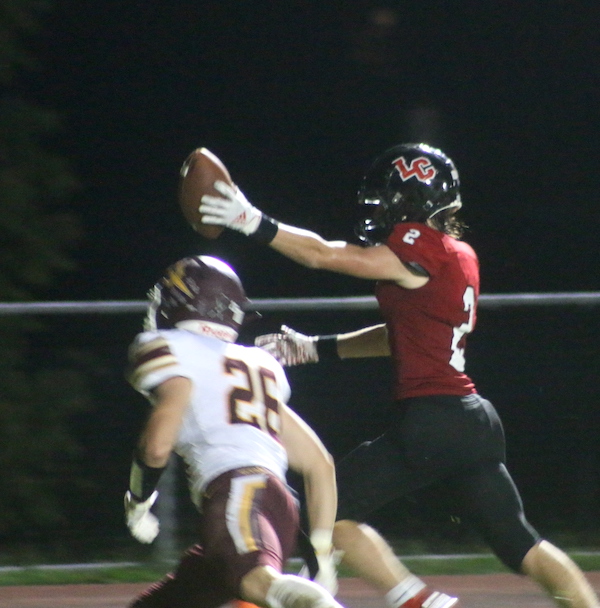 Just before the half was over Russell made it 19-14 on a touchdown pass from Bradley Rose to Doug Oborne to set the halftime score of 19-14 Dawgs.

Coming out of half it took the Dawgs all of :39 to score as Ferguson scored from 6 yards out to make it 25-14.

Ferguson wasn’t done yet as he scored from 12 yards out with 5:31 left in the third and Southers added the PAT to make it 32-14 Dawgs.

Russell answered right back on a Andre Richardson-Crews 1 yard plunge and Totten kick to make it 32-21 with 3:03 left in the third.

Lawrence Co. made it 39-21 after Strickland weaved his way for a 34 yard touchdown run and a Southers kick with :29 seconds left in the third quarter.

Russell would not go away though after a Rose to Mason Lykins 29 yard touchdown pass and Totten kick to make it 39-28 with 10 minutes to go. The Red Devils recovered a Bulldog fumble and were driving to score before Talon Pollock intercepted a tipped pass to end the threat and pretty much the ballgame.

The Bulldogs tallied 442 yards of total offense with 335 coming on the ground.

Alex Strickland looks to make a move on the Russell defender. 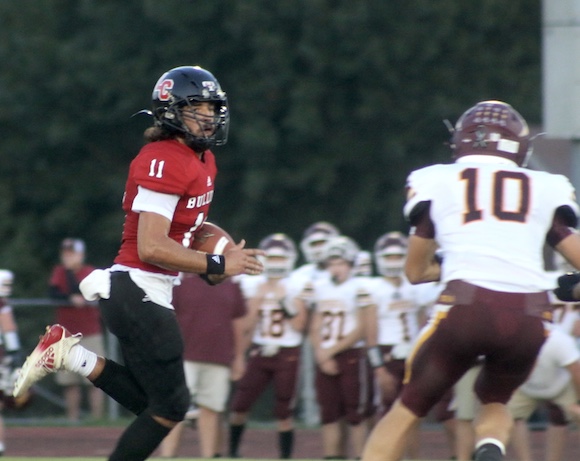 Strickland led the Dawgs rushing attack with 143 yards on 10 carries, Ferguson carried it for 111 yards on 16 carries, Blue Fletcher 51 yards on 8 carries, Kaden Gillispie 2 carries for 21 yards and Dougie Hall 9 yards on 5 carries.

Strickland completed 3 of his 5 passes for 107 yards with 2 of those to Gillispie for 83 yards and the other to Fletcher for 24 yards. 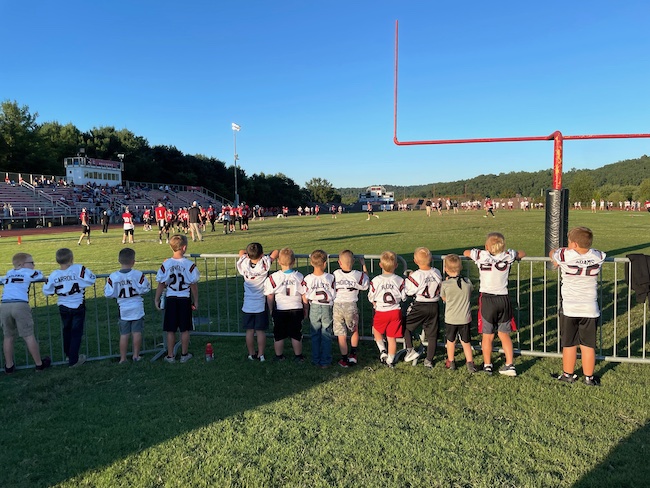 The Dawgs will return to action next Friday night when they open up Class 3A District 8 play with a home game against Magoffin Co. who is 2-0. The Hornets play Bellevue tonight on the road.

Lawrence Co. Student Section was out in full force versus Russell. 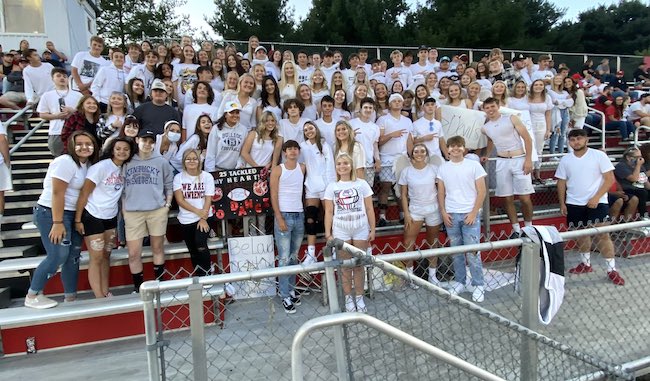 “… Overall environment last night was absolutely spectacular from the opening ceremonies to the student section to the band to the cheerleaders to the youth league football players and cheerleaders, it was something special that’s for sure. I want to give Scott Randell credit for the American flags that were for the 13 that was recently killed and tying that into the 20th anniversary of 9-11 which is this weekend it was a special night.”

“… So proud of our kids they are really good football players but more importantly really good kids who were raised the right way and do things the right way. Such a great group and we are blessed to coach them.”

“… Great win against Russell who is a top five team in Class 3A with such a proud tradition with state titles and for us to beat them is a great accomplishment. They are storied program who I have a ton of respect for. This win should put some people on notice who were doubting us after the first two weeks.”

“… I thought we came out swinging in the first quarter and I was pleased with our effort even though we turned the ball over near the end zone, we have to find a way to punch it in. But on the other side of that our kids are so resilient they never look back they just move on to the next play. I’ve said it before and I will say it again we have a special group here and we have something special brewing.”

“… We will enjoy this one and partake in the Septemberfest activities and I’m sure the boys will enjoy riding in the parade after a big win. We will get back to work on Sunday to get ready for a District matchup with Magoffin Co. who I expect to be undefeated when they roll into Louisa next Friday night.”