Louisa, Ky. — When Lawrence Co. ( 2-0 ) and Russell ( 2-1 ) get together it’s usually a slobber knocker and when the two teams meet tonight in the Septemberfest Bowl at Luke Varney Jr. Memorial Stadium it won’t be any different. 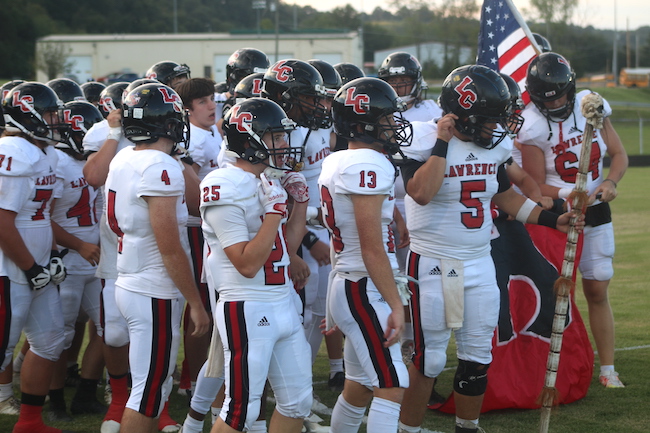 The Dawgs have started the season on fire, scoring 76 points and only allowing 14 in victories over Harrison Co. and Greenup Co.

Russell started the season 2-0 with victories over Boone Co. 19-6 and county rival Raceland 28-8 before falling to Ohio power Wheelersburg last Friday night on the road 35-16.

Lawrence Co. is led by Quarterback Alex Strickland who has accounted for four total touchdowns and is the teams leading rusher with 184 yards.

But he isn’t the only threat to find pay dirt because the Dawgs are spreading the wealth with six different players finding the end zone including four with multiple touchdowns including Strickland, Blue Fletcher, Dougie Hall and Dylan Ferguson. Kaden Gillispie caught a long touchdown pass against Greenup Co. and Ryan Marcum scored in the home opener versus Harrison Co.

Russell is usually a ground and pound team but this year the Red Devils have been putting the ball in the air with Bradley Rose throwing for 4 touchdowns and over 400 yards, Carson Patrick is the teams leading receiver with 7 catches, 217 yards and 3 touchdowns. The leading rusher is Andre Richardson-Crews with 198 yards and 2 touchdowns.

The Bulldogs have been great on defense but tonight will be a challenge for them as the Red Devils are physical up front and are pretty balanced through three games. Caden Ball, Dylan Ferguson, Tyler Bowens, Blue Fletcher and Kaden Gillispie will all have to be ready on a short week against a good football team.

This a rare Thursday night game in Louisa but the weather looks great and a win would kickoff a great weekend for players and fans with Septemberfest beginning tomorrow after a year hiatus because of the pandemic. It is also Youth League night as all of the LCYSL football players and cheerleaders will be honored so get in your seats early and enjoy some football.