FOUR FOR A LOT DRUG DEALING:

DRUG RAID CAME AFTER OVER YEAR LONG JOINT-INVESTIGATION BY JOHNSON COUNTY SHERIFF, SATE AND D.E.A. (BUT ALL FOUR SUSPECTS ARE IN THE WIND AFTER RELEASED ON BOND FROM THEIR INITIAL ARRESTS) 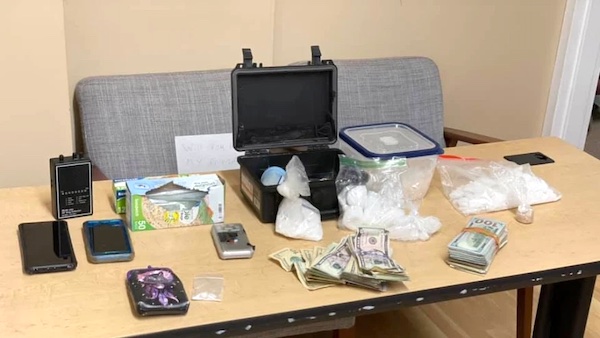 The four people were arrested after a culmination of a year-long drug investigation in Johnson County, Kentucky, on Thursday, August 12.

The four who were arrested were identified as: Charles Allen Chandler Sr., 52, of Tutor Key, Ky., Ashley Johnson, 35, and Cory Brandon Johnson, 32 of Salyersville, Ky., and Jayshawn “Dro Skino” Robinson, 29, of Pontiac, Michigan.

According to the federal indictment, handed down on Thursday, August 26, by a federal grand jury in Pikeville; between April 2020 and August 2021, the four participated in a conspiracy which resulted in the distribution of more than 500 grams of the drug in Johnson and Magoffin counties.

Those indicted were arrested earlier this month as the Johnson County Sheriff’s Office served a search warrant at Charles Chandler’s residence.

On Thursday, August 12th, 2021 the Johnson County Sheriff’s Office executed a search warrant at 3495 Ky Rt 581, in Tutor Key, at the residence of Charles Allen Chandler.

The three local inductees were initially arrested on state charges,

Charles Aallen Chandler Sr. was charged with first-degree trafficking a controlled substance over two grams of methamphetamine, a Class C felony, at the Big Sandy Regional Detention Center in Paintsville, where he had been held since he was arrested on August 6, on a court bench warrant for Failure To Appear.

Ashley and Cory Johnson were both charged with first-degree complicity to trafficking a controlled substance over two grams of methamphetamine.

Charles Chandler Sr., Ashley Johnson and Cory Johnson have since posted bail and been released from the BSRDC after their initial arresta on state charges.

Jayshawn Robinson was held at Big Sandy Regional Detention Center until his eventual extradition by Michigan law enforcement authorities back to Michigan.

According to the federal indictment, the conspiracy charge all four suspects are each facing carries a minimum of 10 years to a maximum sentence of life in federal prison if they are convicted.

Arrest warrants have been issued for the four indicted suspects in the case, for their whereabouts are unknown as of the September Labor Day Holiday weekend.