GROWING UP IN LOUISA: Labor Day 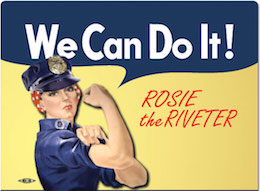 When I was growing up I had trouble really understanding what was going on when people took a holiday in the name of ‘hard work.’ I still wonder a little. This is especially confusing when there is a movement to stop working altogether and rest upon the public dole. Oh, don’t get me wrong. I remember those who worked in the coal mines, on farms, on the railroads and even those who hammered out a living in industry. I remember the good people who ran businesses to support their families and teachers who did a great deal more than ‘babysit’ all of us prodigies. Yes, there were the preachers, part-time and full-time that led many of us to the truths of the Gospel. They also had funerals to preach, couples to counsel, and weddings, too.

Laborers proved their worth many times by turning to the production of war goods and supplies for two world wars. Tanks and airplanes made victory in battle possible. I remember ‘Rosie the Riveter’ posters which symbolized a major change in the workforce when the women of this nation rose to the occasion and proved they were capable of doing ‘a man’s job.’

Yes, there were also sweat shops in the big cities and young children had to work in the factories and mines. Sadly, this was for greed. Yes, the robber barons made it big as armies of workers labored just to keep their jobs and live. I remember Tennessee Ernie’s song ‘Sixteen Tons’ that was a hit back during my school years. Workers who were paid in Company money that could only be spent in the Company Store. This was the lament of the masses. That happened in mining towns and the factories of New England.

This led to battles as labor organized in unions. There were strikes in the mines, on the railroads and in the factories as workers fought for fair wages and fair treatment. It was out of these issues that Labor Day was declared. It was to be a time when one could take a break and rest for a job well done. Back in those days this was needed. New laws preventing child labor, and antitrust behaviors between companies who sought to become giant monopolies helped make these problems go away.

I give credit here for those who fought and sacrificed for the freedom to pursue happiness, but caution that sometimes the pendulum swings the other way. Today, I see a tendency rising toward mob rule. The demand for ‘constitutional rights’ by some is not about pursuing happiness but to govern is through striking fear with violence. This nation is great because we could trust our leaders and because no single school of thought was shut out of speaking their mind. The freedom of expression is being attacked. We have taken the idea of correcting unfair past actions to the point that we are becoming afraid to speak. Let us guard against that. Anarchy is not the answer.

Let us remember the soldiers, sailors, marines, and airmen that fought for us. Remember the first responders that deal with the floods, wrecks, crime, and crowd control. Celebrate those in the medical field that take personal risk in dealing with pandemics and who are sometimes our last hope. We are after all, a great nation. It is here where our friends and loved ones are, where our ancestors are buried, and where our hope for a good future exists. Let no one steal this from us, whether from without or within.

Labor Day had the purpose of celebrating the workers of this great and free nation. That’s still worth celebrating, so kick back and enjoy a day off from work. I know that’s my intent.