DAWGS SPREAD THE WEALTH IN VICTORY OVER GREENUP CO.

Greenup, Ky. —  Five different Bulldogs scored touchdowns as Lawrence Co. moved to 2-0 with a 34-7 victory over Greenup Co. ( 1-1 ) Friday night on a perfect night for football. 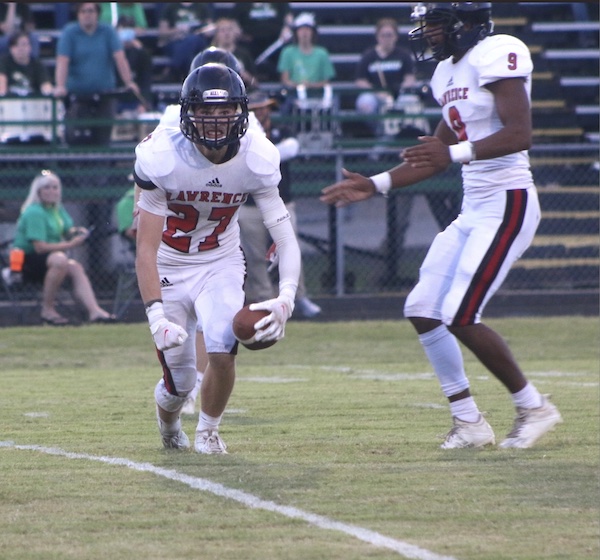 After a scoreless first quarter Alex Strickland connected with Nick Collinsworth for 42 yards the Dawgs dented the scoreboard on the next play as Dylan Ferguson fought his way into the end zone on a 6 yard touchdown run and Logan Southers tacked on the PAT to make 7-0 with 9:13 to go in the first half. 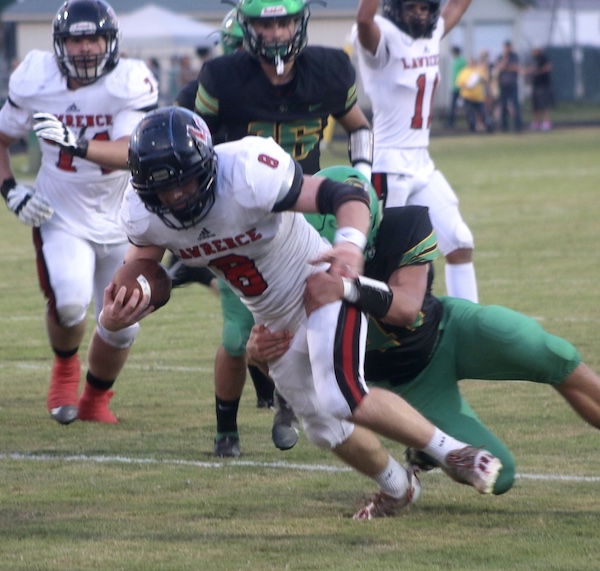 Dylan Ferguson fighting his way into the end zone against Greenup Co.

The Musketeers tied the score with 2:29 to go before halftime on a 7 yard touchdown run by Tyson Sammons and Matt Tipton booted the PAT.

The Dawgs only ran 11 plays in a fast moving first half and never could into much rhythm offensively but that changed on the first play of the second half as Alex Strickland made his way into the end zone from 59 yards out and Southers tacked on the extra point to make it 14-7.

Later in the same quarter the Bulldogs went to the air as Strickland hit Kaden Gillispie for a 57 yard touchdown and Southers PAT made it 21-7 with 2:48 left in the third. 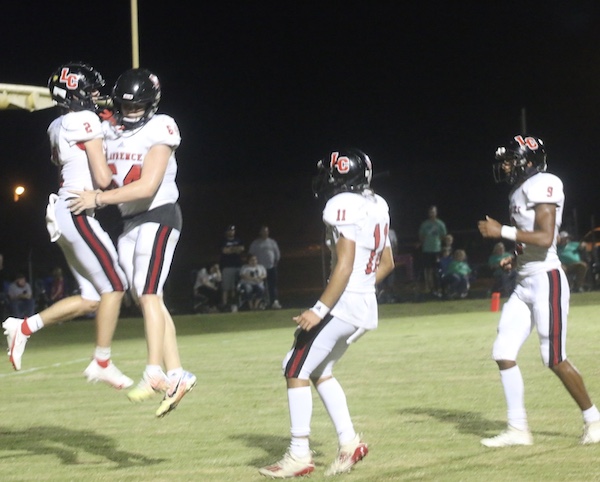 In the fourth quarter the Bulldogs tacked on two touchdown runs the first by Dougie Hall from 10 yards out to make it 27-7 and Blue Fletcher raced in from 58 yards and Southers added the PAT to set the final score.

Freshman Derek Rakes recovered a fumble in the fourth quarter.

The Dawgs will return to action Thursday night in the Septemberfest Bowl against Russell ( 2-1 ).

“… First off our hearts go out to the Greenup Co. team and the family of Coach Jamie Kennedy for what they have been through. It was certainly a very quick first half, it was tough for us to get in any type of rhythm, particularly offensively, but you know hats off to our kids. They didn’t point fingers at halftime. They weren’t upset. They just kind of gritted their teeth and came back out and we were able to execute in the second half and get the win. Im very, very proud of them for the way they handled themselves.”

“…Alex made a play to start the second half, he was a benefit execution by our offensive line and a huge hustle play. I think probably the play of the game may have been Blue Fletcher sprinted down field to get a block for him and spring him for the touchdown and that’s the type of team that we have, no one’s selfish and no one’s jealous. We are certainly very, very excited about our potential.”
“ Five guys scored tonight that’s called balance, we a ton of guys guys that can make plays, we’re going to try to continue to get them the ball and wear people down. I’m very excited to have this many playmakers on our team.”

“…You know it starts with us having really good players on defense and I won’t make any bones about that. You know, we are very skilled and we feel like they play with great effort and then the second part of that is, you know, Coach Botkins schemes them up each week and has those kids in a position to be successful. It’s such a blessing and I can say positive things about everybody on our staff we are certainly very excited and happy to be where we are right now. We’re going to enjoy this one tonight.”

“… It’s a short week next week so we will turn our focus to Russell tomorrow afternoon. Should be a huge crowd and great atmosphere.”

“… You know, first off our hearts go out to the family of Coach Kennedy. We knew, they would come out with high emotion and play for the coach. I thought our kids came out and kind of weathered the storm. We didn’t play up to our standards in the first half, but the Lord blessed us, we got great kids and I feel blessed to coach these young me. that play with such high effort play in play out. We just make sure we follow our assignments every single snap.”

“…. As the game wore on, it seemed like to me, we got more physical and we hit more. We didn’t start out like that, we didn’t start out hitting we played kind of timid and we didn’t take the fight to them like we needed to, hopefully we can start doing that every week from the first whistle.”

“… I thought our guy probably should have scored on the missed field goal and I’ll be on him for that, But he made a great play. I thought he’s just gonna let it bounce but he caught it and took off. That was a big stop for us to get the momentum back. We missed some tackles tonight and I’m gonna have those written on a whiteboard in my room at school and everyone is going to see it. You have got to make tackles, that’s what it comes down to most games. Make tackles in the right spot and forced turnovers. We got one tonight late and it was a young kid Derek Rakes, Man. He’s a great practice player. He does a good job and he is right on the cusp of getting some time.”

“… The defense guys know that no matter how they play. Can we get better? And that’s why I talked to them after them game. What can you do better? I kind of jumped them at halftime. I said, we’re still making the same mistakes that I correct every week in practice and we can’t do that. We came out in the second half and played better, I don’t know how many first downs we gave up the second half, but it wasn’t a ton.”

“… We want to get the ball back for offensive quickly as we can and they will figure it out on that side of the ball. We’ve got enough guys over there that can score in the blink of an eye. I mean it happened in the second half tonight a few times.”

GROWING UP IN LOUISA: Labor Day