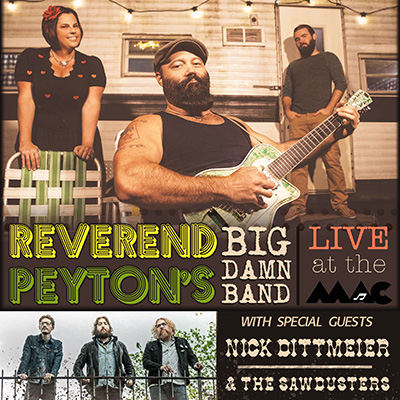 Prestonsburg, Ky. – Blues Music Award nominees The Reverend Peyton’s Big Damn Band are set to bring their “country blues” style of music to the Willard & Lucy Kinzer Theater at the Mountain Arts Center (MAC) on September 16. The Indiana based trio have a devout following, and are known to bring a big sound from their live shows. The band consists of Reverend J. Peyton on resonator and acoustic guitar, “Washboard” Breezy Peyton on washboard, and Max Senteney on drums and 5 gallon bucket. The band claims they are the only rock band with a bucket endorsement deal.

“I like songs that sound happy but are actually very sad,” Peyton says. “I don’t know why it is, but I just do.”

“Like a trusted friend at a party, it grabs you by the hand and steadily walks you in; chatting you up as you come up the walk but leaving no doubt as to exactly when you’ve stepped through the front door. Brilliantly comfortable yet electrifying as all get out.” —AMERICAN SONGWRITER

“Their full-throttle version (of “Shake Your Money Maker”) deftly blends elements of roadhouse blues with the back-porch vibes of the Big Damn Band: listen to the clicks and pops produced by washboard player Breezy Peyton.” —ROLLING STONE

Also on the bill is fellow Indiana musicians Nick Dittmeier & The Sawdusters. The blue collar trio can blend blues, rock, and Americana into a sound that’s like no other in the Indie scene today. This will be the first U.S. date since coming off an expansive European tour.

The Reverend Peyton’s Big Damn Band with special guests Nick Dittmeier & The Sawdusters will be Thursday, September 16 at 7:30pm. Tickets start at $16 and can be purchased through the MAC box office at www.macarts.com, by calling 1 (888) MAC-ARTS, or in person Monday through Friday from 10am – 6pm.

The Mountain Arts Center is the premier performing arts venue in eastern Kentucky.  The facility is managed through a partnership with Big Sandy Community & Technical College. Located in the heart of the bloodline of the Country Music Highway, the facility features a 1,050-seat auditorium, conference/meeting facilities, instruction rooms and a state-of-the-art recording studio.  For more information, call 1-888-MAC-ARTS or visit macarts.com.