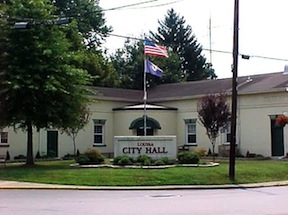 The August 24 special meeting of the Louisa city council went swiftly and was very short lasting for a total of 35 minutes, consisting of 21 minutes of covering the main issues of the agenda, followed by a 5 & a half minutes executive closed discussion, and afterwards the final last under 10 minutes of the meeting for additional discussion.

After the opening pledge and prayers, Mayor Harold Slone stated that the Lock Avenue area is to be blacktopped ‘very soon’. However state road officials keep telling him they’re gonna do it with two weeks, but they have apparently been saying that for the last several weeks and Slone told the council that he told the state road officials that if they did not have it blacktop by Wednesday, September 1 to wait instead until after Septemberfest, as there’s apparently the state road crews will have to tear up a lot of the side streets. And that if if they do not have it blacktopped by September 1 to wait because they don’t want all the road areas in town torn up and in interfering with the travel of people attending the Septemberfest.

Next, as Mayor Slone briefly told the council the study survey award contract of mapping the planned annexing areas, that he will hold off until next month’s meeting to have the major discussions then.

MAYOR SLONE next said that the city had begun the process of securing the funding over the next one to three years necessary for the planned construction of a new sewer waste water plant.

Slone said he was leaving immediately after the meeting for the governor’s local issues conference that was to start on Wednesday, August 25, and would last for two days.

“I feel like it is an important time to be there and look through the agenda and also how to spend our funds and how do you spend your infrastructure money?, and all the stuff that’s all the questions that  mayors and counties have right now we do not have the answers so there is the reason I asked y’all to come at six.” When this is over I’m going to head on down there and try to get some of those answers maybe during this conference I feel like it’s very important to be there at this time.”

The city council approved the minutes of the July 20, 2021 special city council meeting but did not make them available to the public.

The mayor asked the council for their approval of him having signed for grants for the CDBG funds, which is to be used to renovate the entire fire station beside City Hall and build a connection of City Hall to the fire station as a unified facility. Mayor Slone said that grants would be 90% of the money for the budget for the renovation project, totaling $850,000; for the city would have to come up for the remaining ten percent for the project, which would be $85,000.

The council unanimously voted for permission for Mayor Slone to apply and sign for the CDBG grants.

Next, The first reading of the code enforcement ordinance was discussed and approved unanimously.

The mayor and the city council went into the main subject of the meeting, setting the city property tax rate, which is currently .240 of a property’s value. The state had assessed that the total worth of all properties together in city limits had increased to $161 million up by $5 million from last year 2020 assessment at the city properties total being $156 million dollars.

After asking for any city council comments or any audience comments for which no one at that moment there was not anything said in that part of the meeting, the mayor and city council went into a close door executive session that lasted just over 5 & 1/2 minutes.

After the conclusion of the executive meeting session, council member Tom Parsons brought up something he forgot to mention during the council comments, of a situation he was told of just a few hours before the council meeting, that a section of roadway near the Jackson Brothers auto repair business site, had sunk in where a new water line was laid, that had sunk down after gravel was placed on depression. It was believed before the gravel dumping that a water line may have begun leaking, causing the road area to sink in, and was worsened after the gravel drop. And after some steady rain storms, the sunken spot deepened even more, which not long afterwards, a car was driving by and slid into the sunken spot in the road that had deepened, causing the vehicle to be stuck down in that it took a large tow wrecker to pull the vehicle up of the newly created sinkhole. Mayor Slone said he would look into the situation.

The city council meeting ended at 6:36 P.M. The next meeting for the Louisa city council is tentatively scheduled for Thursday, September 14, 2021 at 7:00 P.M.

THE LINK ON YOUTUBE TO WATCH THE VIDEO OF THE MAIN PART OF THE CITY MEETING IS HERE. However the sound quality is lousy due to the return of ‘social distancing’ at this month’s meeting, it may be easier to see what is being said by using the Closed Captioning system instead.