REBELS FALL BEHIND EARLY IN OPENING GAME LOSS TO WAYNE 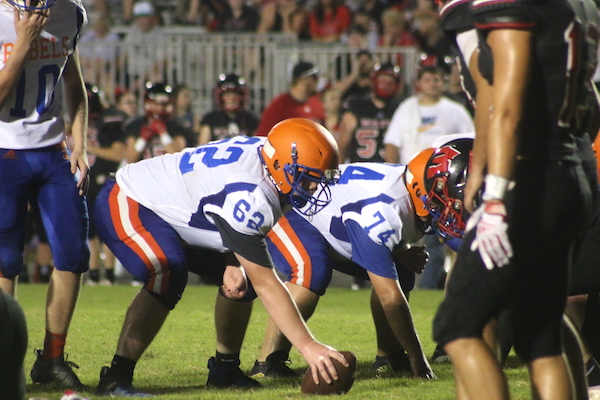 Wayne jumped out to a 22-0 lead in the second quarter behind touchdowns from Grady Spradlin to Isiah Smith and TD runs from Kobe Vanhoose and Rylen Murdock before the Rebels answered with an electrifying 65 yard kickoff return from Eli Blackburn to make it 22-6 with 3:30 to go before halftime which was also the halftime score.

Eli Blackburn hands the ball to the referee after his 11 yard touchdown in the third quarter versus Wayne. 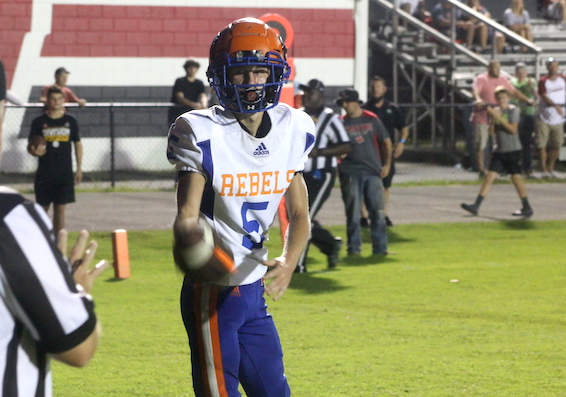 In the third quarter the Rebels special teams came up huge once again as Zach Ramey returned the kickoff down to the Pioneer 35 yard and Blackburn paid that off with a nifty 11 yard touchdown run and Cameron Ratliff hit David Dingess for the two point conversion to make it 22-14 with just over seven minutes left in the period.

Tolsia QB Cameron Ratliff talks to offensive coordinator Wade Cyrus during a break in the action. 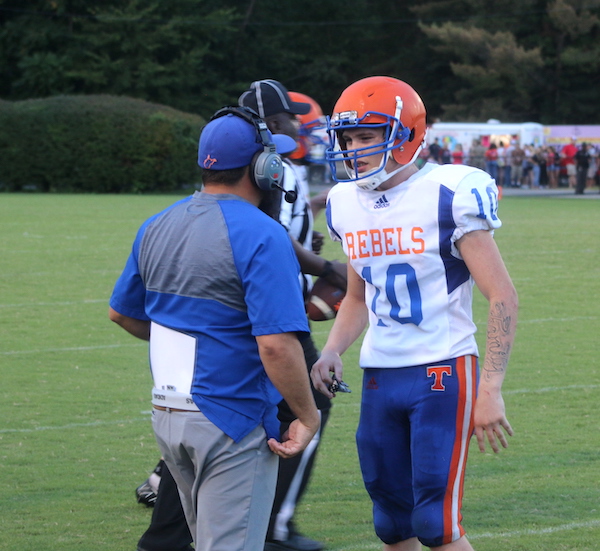 Wayne answered back on touchdown run from Murdock and a two point conversion run from Landon Wolfe to make it 30-14 late in the third quarter.

In the fourth the Pioneers tacked on the final points of the ballgame to make it 38-14.

#21 David Dingess trying to block for #11 Ethan Robertson in the first quarter versus Wayne. 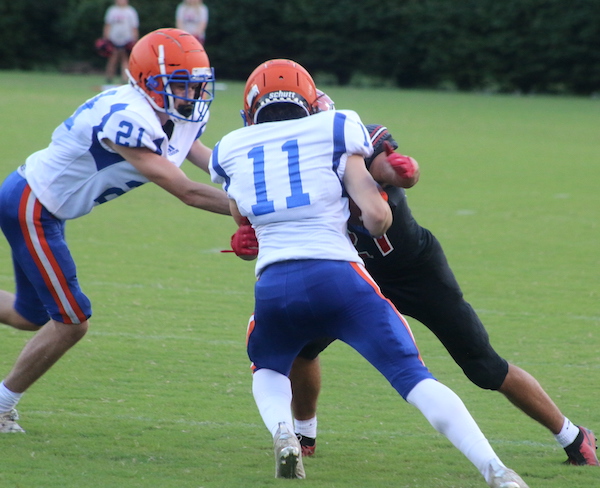 Harley Muncy, Blackburn, Mollette and Ratliff all carried the ball for the Rebels.

On defense for the Rebels Blackburn recovered a fumble and intercepted a pass, Zach Ramey also picked off a pass.

Tolsia will travel to Midland Trail next Friday night before their home opener against Fairland, Ohio September 10th.

Wayne will open up Cardinal Conference play with a trip to Scott the same night.

“… I said in the preview and once again before the game that inexperience was going to hurt us early on and it did tonight. But I also told you our kids will play hard and they won’t quit. I’m so proud of all of those kids in the locker room right now. We are so so young I knew we would make some mistakes tonight like line up wrong or be in the wrong formation or call the wrong stunt. Wayne has a good team and we knew that it was going to be a challenge coming over here tonight. But like I said I’m so proud of our guys for not quitting and for playing hard all night and kept fighting until the end.”

“…We got down really quick and that put us in an uphill battle from the get go, we had all of the momentum in the third quarter and then they just wore us down in the end. The hole was too deep to climb out of.”