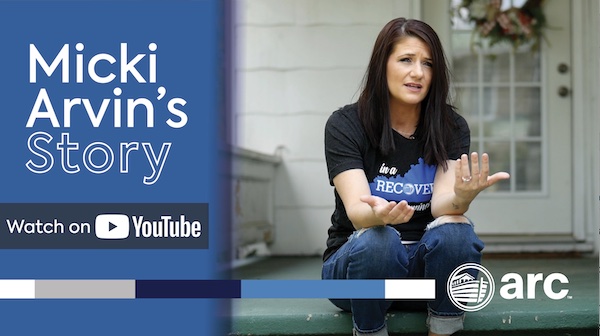 Treatment #9: Micki Arvin’s journey from a jail cell to freedom from addiction

It was a brutally cold day when her spree from running from the police ended. She weighed 89 pounds, but the layers of clothing she wore would make you think otherwise. She was homeless and living in a shack of a building with no heat. This had to be the final straw for Micki Arvin.

Before life on the run and heroin routinely flowing through her veins, Micki Arvin was the light of Leslie County, Kentucky. She was destined for greatness while cheerleading through high school, excelling in academics, and ultimately heading off to nursing school at 19. She would graduate when she was 21. Everyone watched Micki with excitement as they knew she would prove her worth in this world. However, Micki felt the pressure.

“I say that my childhood was normal, but I still had a void inside of me, and I always felt like I didn’t belong,” said Micki. “I always compared myself to other people, I was always a people pleaser, and so I set some pretty high expectations on myself at a very young age.”

In her 20’s Micki would be diagnosed with Polycystic Kidney Syndrome, a rare kidney disease that causes cyst growths inside the kidney. She would undergo dozens of surgeries, leading her to her first run-in with pain medications. The medicine would be Micki’s first taste of addiction.

“I just knew that if I didn’t have that medicine, I would be sick without it.”

Her addiction grew and ultimately took over her life, forcing her to enter treatment after treatment, searching for a way out. The bright spot from Leslie County was starting to fade.

While bouncing around treatment centers, Micki would also use heroin for the first time. She had nothing to lose since she was homeless and her family had forced her to give her daughter to them for the time being.

“I remember the first time I ever did heroin,” said Micki. “I remember it like it was yesterday. I remember looking up at the mirror in front of me and audibly saying out of my mouth, ‘I want to feel this way for the rest of my life.”

The peak of her addiction was when Micki overdosed seven times in one week. Five of the seven times she was narcanned.

Crimes would lead to warrants, and Micki was officially on the run from the police. The running would last over a year. She could not go anywhere without the fear of being caught. Going back home to Leslie County was risky business since the well-known shooting star was now known as the falling meteor.

She had not seen her daughter in 14 months, her family stopped taking her phone calls, and her only friends were drug dealers. Micki Arvin was officially alone.

“I remember being on the run and knowing that if I would turn myself in it would just all be over with, but I couldn’t find the courage to do it.”

The cold day Micki was caught was the day she could breathe again if you asked her. She would sit in jail for seven months before her brother gave her one last option. Seek treatment or die alone. The option was to go to Addiction Recovery Care (ARC) and try again.

“I had just accepted that I was going to die this way. I was going to be someone that went in and out of jail all the time and never to have a different life, said Arvin. “This is treatment #9 for me.”

Micki would walk out of her jail cell that day with the agreement she would seek treatment at ARC. She has never looked back.

Micki would complete ARC’s four-phase program and begin an internship. She now works as an intake specialist, speaking to people in the same shoes she was once in.