GROWING UP IN LOUISA: Sales Incentives

Sales gimmicks were a marketing ploy during the mid-forties, fifties and beyond to influence their customers to choose one product over another. That was the infamous ‘free’ offerings. Gifts were sometimes included in the product’s actual packaging worked on those families just coming out of the depression and World War Two. The idea highly increased the brand’s market share and kept the loyalties of their customers. 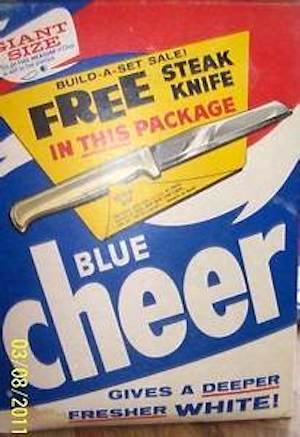 I remember when powdered soap manufacturers added a dish, or a cup from a set of dishes, to their boxes of detergent. When I went to different homes during my high schools days, I saw many of the easily recognizable ‘Jewel Tea’ dishes that were premiums for their customers. These items were treasured by my grannie. While I still see some of those very dishes in thrift stores and garage sales, I seldom see them anymore in homes as regular, daily use dinnerware. As for my family back in the day, some of our better dish sets were obtained over time in boxes of oatmeal. Even our wash cloths and drinking glasses came this way. Filling stations used to give drinking glasses with cartoon characters emblazoned with a new picture each week.

Human nature being what it is, we loved to believe we were getting something for nothing. After all, we would have had to buy that box of soap anyway and the premiums were included without additional cost to us. One also had to consider our excited anticipation in finding a ‘treasure’ when digging through the box looking to see what we got this time. We felt like winners when we finally laid our hands on the prize.

This kind of thing has not gone away, but is still happening as an advertising ploy. Who hasn’t watched late night TV and seen some miraculous new product being offered…wait a minute, ‘If you order right now we will double the offer.’ ‘Only pay a small shipping charge and the second one is yours.’ We know that if we hold out making that call a minute more we may also get a set of steak knives that never need sharpening and are guaranteed to cut through metal. Oh, my. It goes on and on. Frankly, some things I’ve seen have raised my interest, but overall, the products come with that real risk that they are not really worth the money, even at half the price. Besides, I already have steak knives. It’s the steak that I don’t have, silly! 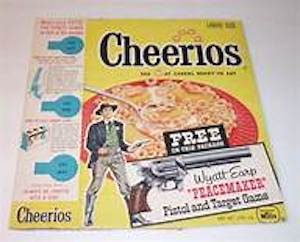 When I was growing up I knew by instinct that companies advertised the inclusion of prizes to popularize their product over the competition. It was common for cereal makers to include a toy or a premium in their box. We all surely remember that ‘Cracker Jacks’ was famous for their cute little plastic prizes at the bottom of their boxes. After a time they even marked which end of the box contained the toy. Some still do that, if not to attract new sales, then to keep up the tradition. Others had kids accumulate a number of ‘box tops’ or lids to send in for a decoder ring, badge, or a secret membership card. Even today kids get excited over a toy inserted in their fast-food packages.

The biggest seller for boys in my day were baseball cards issued by Topps, Bowman, and other companies. Originally they were meant to be a premium to sell gum, tobacco, or whatever, but the product was quickly tossed aside. It was the cards that became collectable. Frankly, the gum wasn’t all that good, but the thrill of getting a ‘good’ player’s baseball card was worth the nickel or dime it cost. I bought more than just a few packs of cards over those. I remember merchants keeping them close to the checkout counters in the stores around town as reminders to pick up a pack. We thought that maybe we’d get lucky and get one with our favorite baseball hero. I remember once or twice when grocer, Andy York, out of kindness, bought a whole box of cards and sold them all to me at his cost. As I franticly rushed through those boxes, I tossed the wrappers and gum, and stacked the cards to sort later. The prize had become more important than the product they were trying to market. In time they caught on and stopped producing the gum and packed the cards by themselves. 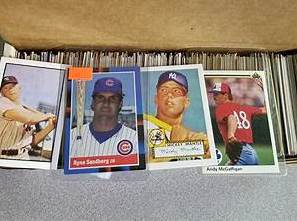 I sorted my cards by team and added a few at a time to my growing collection. I would sometimes trade with friends for cards I didn’t have. That ultimately enhanced both our holdings, each now with cards we didn’t have before. If I still had them they would have a lot of value now. I had Babe Ruth cards, tobacco cards, and tons of Topps cards from the fifties. When I went into the service I left them at home with my belongings, but never saw them again. I suppose they went to the town dump that used to be between Town hill and Pine hill.

All these things were ‘free gifts’ in my mind. For the seller, it insured the customer would return to buy more. It must have been worth that little extra cost to them. If we think about it we would discover (again) that there’s no ‘free lunch.’ We paid a hidden price by giving our loyalty and perhaps when we were near having a full set, by buying more than we needed.

In our case the family budget didn’t allow for a new set of dishes, but a box of detergent was necessary anyway. In those days most families were stuck with small, rigid budgets. Premiums were a godsend and they satisfied adults and children alike. I remember a family friend who didn’t collect premiums box-tops but knew that I did. They saved them up for me. This helped me so I could send off for an advertised ‘free gift.’ My ‘Sky King’ wings were won almost instantly!

Another popular thing that rose up out of this climate wasn’t meant to hold us to brands, but rather to certain stores and filling stations that handled the new premiums. I’m talking about trading stamps! These became a gigantic influence in how we bought nearly everything. While this program began in the 30’s, it didn’t get to our part of the woods until much later. When a small group of participating merchants started giving these out, they increased their sales and struck a blow to their competition. This forced other stores to jump in and issue trading stamps just to stay in the game.

Overall, while troublesome, it was another winning tactic. The customers had to collect pages of stamps and paste them into a book to redeem for prizes of all sorts. I recall that stamps were placed loosely into a box and later we as a family came together and did some ‘catch up’ pasting. I think they had a redemption store in Huntington, but also in several of the larger cities around.

I think it was Raleigh tobacco that put stamps into every carton of cigarettes to be collected for redemption at a future time. Like a few folks, I saved those for a while, but I never tried to redeem them. I never seemed to have enough to get anything worthwhile. If the general population was like that, a very small percentage of the redeemable products were ever issued to the collector. The bottom line is that the stores bought into the program and may have increased their overall business, but the stamp companies rolled in profit.

Marketing is sometimes a slight-of-hand action more than providing a generous gift. It isn’t necessarily evil, but simply a way to increase sales while reducing overhead. The net effect should be a profit for the seller and a benefit for the consumer. In the end, all of these were just marketing gimmicks. Every time we reacted and made a purchase, we reinforced their program.

After leaving the service as a young man I took jobs working in retail. I established myself in management and ended up dealing with various marketing ideas. I learned to buy products at wholesale and place them on the shelves and racks at regular prices. It was common to mark up the goods by twice the cost to us. This profit covered our overhead that included utilities, the building, advertising, payroll, and finally future price reductions we would make to clear out left-over or seasonal items. There were times when I would travel to wholesalers or manufacturers and buy large lots of goods at their clearance prices. This would enable me to put them in stores at a greatly reduced price, thus passing savings to the customer and increasing our sales. What was not seen was that I was still making double the actual wholesale price. My profits soared when I promoted the price reductions.

My wife, Suzie, reminded me of the story accredited to Ben Franklin about bargaining for a wooden whistle he wanted. His advice was to bargain or wait for a clearance sale. One should ‘Never pay too much for their whistle.’ I try to remember that when trying to fulfill my needs or wishes. Back in the day folks used to say that ‘everything has an angle.’ They were right.

Today, banks no longer offer toasters for a new account, and trading stamps are more trouble than they are worth. Credit card companies offer 1.5-5% cash back if you use their card. While this is beneficial if you were going to use the card anyway, especially if you pay the card off at the end of the month.

I expect that there’s a reader or two that still uses those Jewel Tea plates, or other premiums left over from days gone by. Some of you may still have some unused trading stamps in the corner of an attic or have a magic decoder ring in a dresser drawer. How interesting it would be to rediscover some of those treasures long forgotten. Best wishes as you look. mcoburncppo@aol.com