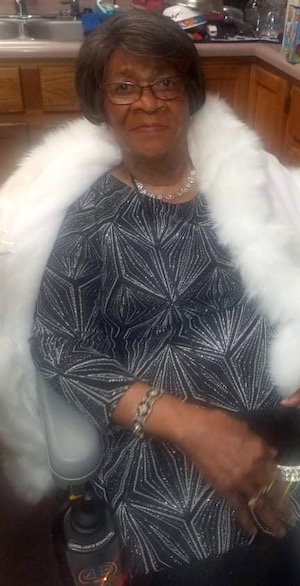 Ruth Mae Scott McGhee Ewing was born into time on December 18, 1922 in Long Acre, WV, to Lee Claxton Scott, Sr. and Alice Scott, and she was born into eternity on August 23, 2021 in Huntington, WV. Her mother moved Ruth and her siblings to Huntington when Ruth was 4 years old. They attended Sixteenth Street Baptist Church, where she was baptized.

Ruth graduated from Douglass High School in 1942, married Thomas McGhee and moved her church membership to Young Chapel AME Church. She was married to Thomas McGhee for 17 years. Her second marriage was to Dannie Gene Ewing, and that marriage lasted 14 years.

Sis. Ewing faithfully served on the Young Chapel AME Church Usher Board, and the Missionary Board, and was delighted to be named “Mother of the Church.” She enjoyed being a member of the Rinky-Dink Social Club.

Ruth worked as a private maid for the Meacham family. She later worked at the Blue Jay Pants factory, Guyan Country Club, Cabell Huntington Hospital in the Dietary Department, and Rescare.

Mom lived life to the fullest and had the ability to reach people in a deep and positive way. She was like a ray of sunshine to everyone she encountered, spreading the love of God all around. Just being in her presence made you feel better. She enjoyed simple pleasures such as spending time and talking with friends and family. As matriarch, she firmly believed that every family event demanded her presence, so she would travel far and wide to the proceedings  Granny looked forward to having every new person entering the tribe sit with her and receive her blessing. Big Granny loved her family and made many sacrifices for them. She cared for her mother, Alice Scott Mitchell in her home until Bubby’s death in 1983. Always a mother, she provided a welcoming home for her children, grands, and great-grands through the years. She was generous to a fault. She always found something good in each person. As her health began to decline, Ruth lived with her son Dannie Gene and daughter-in-love Carolyn; daughter Gay and her son-in-love Burnett; and daughter Lilly.

Ruthie Baby’s favorite restaurant was Red Lobster. In 1985, she was one of a group of “caravanners” that rode buses to Lexington, KY, to lobby for a Red Lobster in Huntington. When it opened in Huntington, the group was invited to a VIP party and Grand Opening.

Mama’s cooking consistently produced delicious, tasty, tempting dishes because she liberally used her magic ingredient – love. When her mother-in-law Vergie was grief-stricken and would not eat, her appetite returned when told that “Ruth made this.” The family favorites included home-made rolls, baked chicken thighs, butternut pound cake, cheesecake, chicken & almond casserole, and seafood.  Some of her desserts were sooo good that one particular child would hide them in order not to share. She was willing to give you her recipes, but the problem was she seldom made the dish the same way twice.

A few phrases we frequently heard her say were, “God doesn’t like ugly,” to the children, “Play nice,” and to the girls especially, “Pretty is as pretty does.” Also, after you got a hug and kiss from her she’d say “Pass my love along.”  She thought the purpose of her longevity was “To tell of God’s goodness,” and was the results of “Doing something good.” Along that same theme, she would point towards heaven and say “ But God.” When offspring were facing challenges that could be addressed with hard work or difficult adjustments, her advice was “Life is meant to be enjoyed, not endured.”  She ended many of her conversations with “It’s been a joy and a pleasure to talk with you.”

Home Going services will be conducted Saturday, August 28, 2021 at 1:00 PM at the Young Funeral Home Chapel with Rev. Oliver W. Banks officiating. Burial will follow in the Spring Hill Cemetery.

Friends may visit the family on Saturday, August 28, 2021 from 12:00 PM until time of service at the Young Funeral Home Chapel.

Young Funeral Home has been entrusted with the care of Mrs. Ewing and her family.

Lawrence County Court Docket for the week of August 23-27