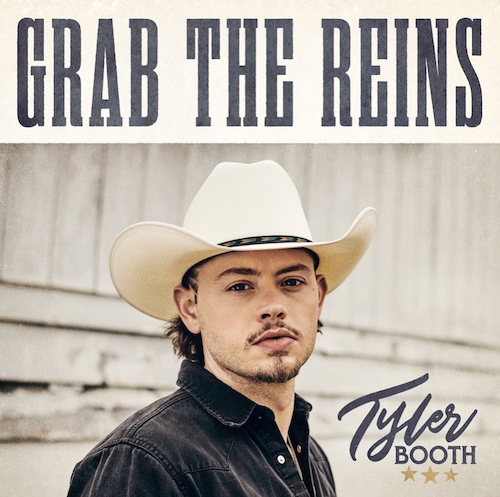 “Grab the Reins is me having the confidence to say, ‘this is who I am,’” said Booth. “These songs reflect where I’m from, how I was raised, and are at the core my interpretation of Country Music as a songwriter and an artist.”

The project includes “Already Got One,” released early this year along with the “enchanting” (American Songwriter) “Palomino Princess,” which Billboard commented “perfectly suit his deep, ranging voice.”

Lauded for his baritone voice that “will leave you speechless” (Outsider.com), Booth is named a 2021 Artist to Watch by Sounds Like Nashville, Country Now, Country Music Tattle Tale, among others, and Music Mayhem Magazine predicts that “2021 promises new heights of success for [the] traditional country rooted singer.” He will be hitting the road this summer and fall, appearing on select tour dates with artists such as Darius Rucker, Jon Pardi, Jameson Rodgers, and Willie Nelson. For tickets and additional info, visit TylerBoothMusic.com.

About Tyler Booth:
Road warrior, songsmith, and proud Kentucky native Tyler Booth has been making a name for himself in country music since he first started playing festivals around his home state as a high schooler. Born and raised in Wolfe County, Kentucky, he grew up in a musical family, often sitting in on the rehearsals of his dad’s rock band. After enrolling in Morehead State University’s Traditional Music Studies program, he quickly caught the attention of one of his professors, Scott Miller, an old friend of songwriter Phil O’Donnell (George Strait, Craig Morgan). After Miller made the connection, O’Donnell invited Booth to Nashville, where the two cut his first EP, Self-Titled, released independently in 2017. Fast-forward two years, and the singer’s star is rising quickly — he is featured on legendary duo Brooks and Dunn’s country swing-style ballad, “Lost and Found” on their REBOOT album, amid his heavy touring schedule, and a short nine months later, he becomes the first artist signed to Sony Music Nashville and Villa 40’s joint-venture agreement. He made his major label debut with “Half a Mind to Go Crazy,” followed shortly by “In God and Trucks We Trust” and “87 Octane.” Now, armed with an Outlaw bent and two infectious new tracks this year, “Already Got One” and “Palomino Princess,” Booth continues to build a career in country music and a loyal fanbase. He was recently singled out by The Music Universe as one of the “Five Artists You Need To Know,” to which they said of Tyler: “I’ve been hearing country music needs saved. Well, our hero is here, y’all.”