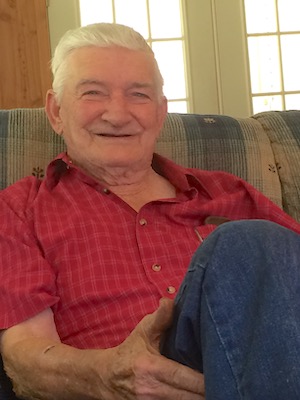 He was the last surviving child of 11 children born to the late Eddie and Edith (Williamson) Plummer of Williamsport, KY. He was drafted into the service in 1944 and retired from the US Army in 1966 as a highly decorated SFC E-7, after serving in World War II and the Korean War. He then retired from JH Fletcher’s Mining Equipment. He was preceded in death by his wife of 51 years Krimhilde “Kim” Plummer.

He spent his life caring for his family, friends, and neighbors and making people laugh. In lieu of flowers, the family requests expressions of sympathy take the form of donations to the church or charity of your choice.

Funeral services will be conducted Sunday, August 29, 2021 at Noon at Big Hurricane Missionary Baptist Church with Brother Tony Perry and Brother Darin Fetherolf officiating. Burial with full military honors will follow in the Christian Cemetery.
Friends may visit the family on Saturday, August 28, 2021 from 6:00 PM to 8:00 PM at Big Hurricane Missionary Baptist Church.

The family requests anyone attending visitation and funeral services to wear a facial covering.

Young Funeral Home has been entrusted with the care of Mr. Plummer and his family.