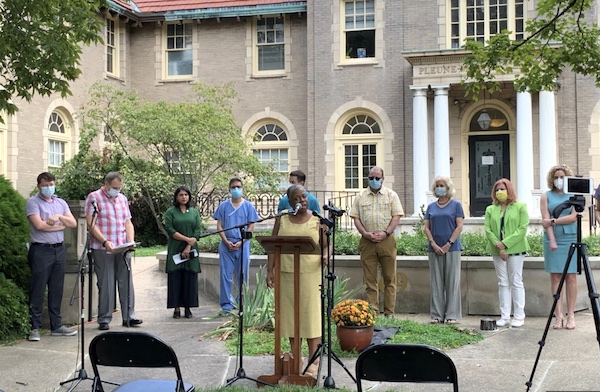 On Monday, the two General Assembly leaders will mail the governor and the congressional delegation a formal letter, which follows President Biden’s decision to withdraw American forces from Afghanistan.  They noted that U.S. Representative John Yarmuth, who serves the 3rd Congressional District, supports their request.

In the letter, which can be accessed via the link below, Rep. Jenkins and Sen. McGarvey wrote that “Kentucky has long had a reputation of accepting people from around the world, particularly when they have been displaced due to political or military reasons.”  They noted many seeking asylum in the United States served alongside American forces, have families with young children and may be at risk in their homeland because they are women or members of the LGBTQ+ community.

“Whatever the reason they are leaving, we have a moral obligation to protect them,” the Democratic leaders wrote.  “…  It would be needlessly tragic if they had nowhere else to turn, no one else who could provide them the safety and kindness they truly deserve.”

Semsudin Haseljic, KRM Program Leader and Wilson-Fish Case Manager, added that the “commonwealth of Kentucky is in a very strong position to resettle Afghan refugees. With well-established resettlement agencies in Louisville, Lexington, Bowling Green, Owensboro – and soon to be in Covington – we are ready to respond to this humanitarian crisis. On a personal note, as I watch Afghan refugees arriving in Ramstein Air Base, it brings back memories of when Bosnian refugees, including myself, were evacuated 27 years ago to that same base.”

The two legislators said they were pleased that a bipartisan group of elected leaders in other states is also seeking Afghan refugees as well.  “We need to add Kentucky to that list,” they said.