GROWING UP IN LOUISA…School Buses

Those long yellow vehicles were a big part of a lot of people’s lives during their school years. As a ‘town kid,’ I really didn’t have a lot of personal experiences riding them because I always walked to school. In fact, I think there was a rule that buses would not pick up town kids. Later on, when briefly attending school in a big city, I was shocked to see buses picking up kids from street corners. Back home, the bus stops were generally in neighborhoods and kids often had to walk a good ways to catch the bus. 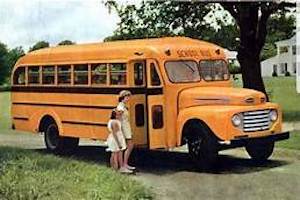 Unlike my friends from out in the county, it was rare that I ever found myself having to skip breakfast and frantically run to catch the bus. There were times when I stayed over with a friend, so I found out. I had sympathy for those that faced bus schedules and fitting chores into the morning before having to run ‘all out’ to the bus stop. I had many of my classmates tell me the wild tales of trekking out in the snow or rain, sometimes only to get the message that the bus wasn’t coming. I’m sure that was frustrating considering the effort it took out to get ready to hit the road every morning. Also, they had to get up hours before my daily routine. I didn’t know how good I had it!

I knew that in many of the hamlets and little communities that some of the kids would often go to the stop a little early so they could meet their friends. I heard a few cases of kids looking for that one special person, who if things went right had saved them a seat. Some tales of the heart were short-lived while for others the relationships lasted a life time. For those ‘love-bird’ couples, the ride into town and back were usually the only time they got to see each other during the week. If it was dark riding home, and a bit cold, couples would snuggle and fairly-well get away with it.  There were times, too, that couples had their tiffs and sat apart. The other kids would notice and usually take sides. It was as if neighborhood wars were underway.

As I mentioned, I rode the bus a few times when I went home with a friend to ‘sleep over,’ or at least that’s what they call it now. I think ‘spend the night’ was the term in our day. Of course, in my case, the visit was always with a male friend. Sometimes it was a case where the male friend had a sister that I really wanted to see. In any case, wise parents were careful and took steps to keep us out of trouble. In my case they needn’t have worried, because my affections were rarely returned. I’m sure my shyness was a big part of why.

I recall that once I rode home with one of my teachers as a special invitation. The teacher and his wife either had no children or if they did, they had grown up. I think they wanted company. John Pennington, then a LHS math teacher, lived in Webbville up the hill from the only intersection in town. He and his wife played host to me out of the kindness of their hearts. I’m thinking they didn’t have any children so maybe wanted to have a visit, or maybe there was a motive that I never knew. Mr. Pennington showed me his ‘chinning bar’ he used to stay fit. He also tried to teach me how to be a baseball pitcher. I kept telling him I was a catcher and had no talent or desire to take the mound. I wasn’t a particularly an accurate thrower and had perpetual rotator cuff issues. I didn’t know what it was called back then, but I know now. 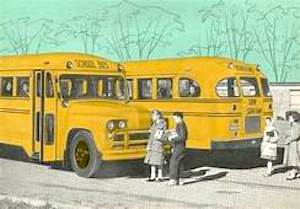 The Pennington’s had a big bed in the guest room that I spent the night. It was many times more comfortable and warmer than the saggy feather mattress I slept on every night. Breakfast was a virtual feast like I’d never seen before. Not only did we have ham (or bacon) and eggs, but oatmeal, muffins, jelly, and milk. I was impressed and a bit overwhelmed at the sight of such bounty. I still remember that comfortable bed, the big breakfast I was served, and the hospitality. Finally, after breakfast, Mr. Pennington and I went down the hill and we caught the bus to good ole’ LHS. I had ridden that bus both ways and was back in school the next day in very fine shape.

Because I was in the band, I made several trips to camps, parades, ballgames, and the like. I always enjoyed the trip back home because we kids would recognize the event as a time to bond. We would milk the experience for all it was worth. I remember the songs, including ‘ninety-nine bottles of beer on the wall’ and ‘She went wading in the water.’ We sang the LHS Fight Song, and tons of others. I can still hear the laughter. Man, life was good.

I remember once during one of the summers, Bill Cheek drove some of us baseball players to see a big-league game at Crosley Field in Cincinnati. We drove for hours in anticipation of what was going to be the event of our lives. We were going to see a real major league ballgame! Wow! Things that I had only heard about on the radio, or seen on the black and white TV, would be right there in front of me!

When we got there, we went to the seats behind home plate that were underneath the upper deck. It was then that I saw the prettiest bright green grass I’d ever seen. The field was so pretty, but there was one big problem. A tarp was covering all of the infield. It was raining. After a short while, the game was called so we had nothing to do but load back onto the bus and drive home. The trip home was quiet because of the let-down, but we had a short spell of singing. In the end, we were tired, so many slept. We had the longest faces, but on the bright side is we did get to see the field and had a fun trip together.

While we were in high school we also took a few field trips, including one to Carter’s Cave. I remember seeing the features of the barely lit cave, and I now think it was very like the scenes I later saw in the movie, “Journey to the Center of the Earth,” with Pat Boone. If I had seen the movie first I would have worried about the giant lizards featured in the film. 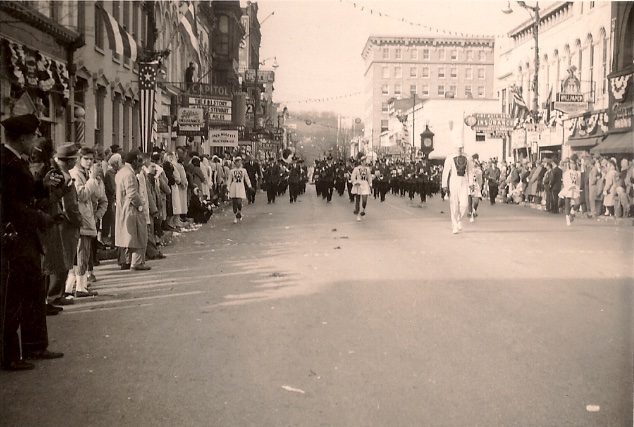 It was in our senior year when the band marched in the Kentucky Governors Inauguration Parade in Frankfort. Mr. Cheek rented a couple of big coach buses instead of using the yellow school buses. That move probably saved us from freezing since it was cold that January, or February, day. School buses weren’t known for good heaters. That cold, cold day the kids that played woodwinds wore gloves with holes cut out on the finger tips so they could properly cover the holes on their instruments. I’m sure the brass horns were cold to put to your lips, but that year I was the drum major, so I wore white gloves. I had long-johns under the uniform. Might have been the first time this skinny kid ever looked normal. I carried the large wooden baton that was pointed at one end and had a bulb on the other. I remember that it was cold enough everyone was disenchanted with the parade and just wanted back on that warm bus. That I remember for sure.

There was a bit of romance with the old yellow school busses, but also a roughness about them. None of us will ever forget that awful day when a loaded bus crashed into the Levisa fork near Paintsville on that cold February 22nd morning. For days, we all suffered as we listened to the broadcasts. The whole nation was attuned and saddened that so many had lost their lives in such a way. That bus became a tomb for many. Some families lost several kids. We shared in their pain. The yellow buses never were the same to me after that.

When we look back we all likely have good memories and bad. Regardless, they played a big role in our lives. We learned that it wasn’t so much what happens but how we handle the events. School buses, whether they had daily runs to and from Lowmansville, Bussyville, Adams, Smokey Valley, High Bottom, Blaine, Yatesville, Fallsburg, Buchannan, or Webbville, was an important thing for so many. I have a respect for those that went through the hardships endured and took the risks of doing what was necessary. I’m thinking that there had to be a love-hate relationship with riding school buses. After all, you got to see your friends, perhaps a favorite driver, and then even more friends when you got to school. Sometimes there may have been a romantic breakup, some bad news to share from home, or maybe a conflict of some kind with others. What I remember was the joy of being with friends. I think even the bus was enough of our world that we would have missed them if they weren’t there. I hope you have good memories of those times while trying to catch the bus.

DAWGS START SEASON OFF WITH A BANG IN FRONT OF A GREAT CROWD AT LUKE VARNEY JR. MEMORIAL STADIUM