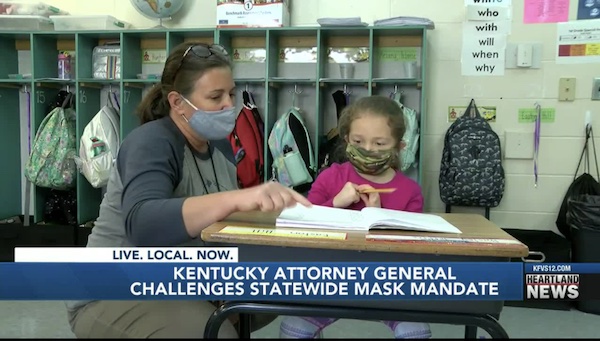 LOUISA, KY. — In the face of widening dissent concerning the mandated use of masks in schools, Lawrence Superintendent Dr. Rob Fletcher said the first day of school yesterday went well and the students and staff are adapting well to the masks.

“Governor Beshear issued a mask mandate through Executive Order on Tuesday at about 4:30 PM.,” Fletcher said last night. “When an Executive Order is given, it carries the weight of law.”

“I am happy to say that our students did a great job today.  I am very proud of how they handled the late notice from our Governor.”

Meanwhile Kentucky’s attorney general is challenging the mandate of Governor Andy Beshear that masks be worn by all school students and employees across Ky. in the Ky. Supreme Court.

FRANKFORT, Ky. — Kentucky Attorney General David Cameron said his office is reviewing the governor’s mask mandate for schools and childcare centers and plans to take it to the state Supreme Court.Gov. Andy Beshear announced Tuesday the state will be mandating masks for everyone in school.

Beshear signed a 30-day executive order, requiring masks for students and staff in educational settings to protect children too young to get vaccinated.

That means face coverings indoors at all schools public and private from preschool through grade 12, as well as child care centers.

This comes as the state health commissioner says hospitalizations are up 32% and ICU patients up 43% in one week.

In a series of tweets, Cameron responded to the mask mandate, saying his office is actively reviewing it.

“As Kentucky’s chief law officer, our office must ensure that the rule of law is upheld during this pandemic. This means protecting the law-making prerogative of the General Assembly and respecting the judicial power of our courts,” Cameron said.

He added that his office will have more to say about the mandate in a filing Wednesday with the Kentucky Supreme Court.

FRANKFORT, Ky. — The Kentucky Board of Education is expected to vote Thursday on a mask mandate for public schools just days after Gov. Andy Beshear issued an executive order requiring masks in all schools and child care centers.A copy of the proposed emergency regulation shows it would require masks for all students and staff at public schools throughout the entire year. That would mark a clear difference from the governor’s order, which is in place for the next 30 days.

The board of education cited a “significant and alarming” increase in COVID-19 cases since mid-July in its reasoning for considering the emergency regulation. In particular, the delta variant of the coronavirus continues to cause increased concern across the state due to it being “nearly twice as contagious as previous variants.”

“The regulation is necessary to mitigate the spread of COVID-19 in Kentucky public schools and prevent public school closures during the 2021-22 school year due to COVID-19,” the board wrote in its consideration for the emergency regulation.

On Tuesday, the governor issued his first executive order since COVID-19 measures ended in June. It was solely focused on schools out of concern by Beshear that school districts weren’t doing enough to require masks for students and staff.

Beshear’s mandate will be in place for the next 30 days and can be renewed if needed. It’s unclear what would happen to Beshear’s order if the Board of Education passes its emergency regulation.

It also comes as several Kentucky officials have come out against the latest order from the governor, calling Beshear’s mandate unconstitutional. While the governor has said the state Supreme Court has ruled in his favor when it comes to issuing executive orders, other state officials and lawmakers have wanted him to work more closely with the General Assembly when it comes to issuing new mandates.

The mandate reversed a decision Science Hill district officials had made that masks were not required.

“Parents, good afternoon. As you already know, and probably have already heard, this liberal lunatic that we have up in Frankfort has signed another executive order mandating masks for all students and adults in school,” Dyehouse said in the audio message. “What this means is the professional opinion of your superintendent doesn’t matter, the opinion of your school board doesn’t matter, and you as parents, your opinion doesn’t matter.”