GROWING UP IN LOUISA: The Garden Theater

Like other towns, our local theater had a special place in the heart of its growing children and even sometimes the adult population. The little town was seen in our eyes as picture perfect with the well-maintained homes, clean streets, and so many exciting places to discover. It was at the Garden Theater that we learned about the complexities of life. We saw and believed the fairy-tales 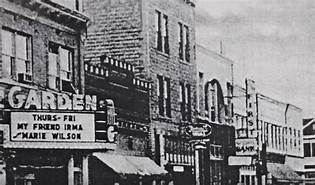 but began to understand some realities. In our youth we became exposed to Hollywood’s portrayal of living models that were far and away different than those we experienced at home. With open eyes we matured and built up defenses against the naiveties of our youth. The film industry was more about marketing their products than any overwhelming desire to have a positive effect on those paying their quarters to be entertained.  They dragged us into the worries and insecurities of adulthood, but then again, maybe learning it from a film that had happy endings, softened the blow.

Movies, and later, television opened our eyes and took away our innocence. It may have started for me with the death of Bambi’s mother, (so traumatic for me,) or it may have been when Pinocchio’s nose grew and sprouted leaves at the telling of lies by the wooden boy. I saw many more kids turned into donkeys because of their hedonistic ways. Hollywood was destined to become a big influence in our lives and undoubtedly the lives of many others. Some of the lessons learned were useful to us as we maneuvered through life. We kept the faith and learned to deal with life’s disappointments.

For those growing up in Louisa, the Garden Theater was the place. We spent so many hours with our friends and classmates eating popcorn and candy while the big screen took us around the world. The art deco exterior with the marquee and framed pictures of the current attraction was no 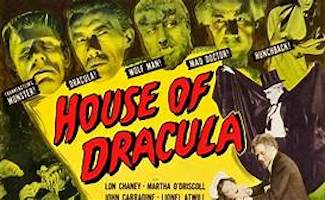 different than theaters scattered about the nation, but to us, this was our hometown theater. In the small lobby, that was just inside the swinging doors, were more framed pictures of coming attractions. They would incite our imaginations and wet our pallet for more movies that pleased, entertained, and sometimes scared the wits out of us. Those early days of marketing films and heroic actors, made us determined to miss this new movie. We saved whatever coins we had for the Saturday Matinee. Finally we were taller and ready to see a featured movie with a date. The Garden was the playground for our growing minds.

I’ll never forget the small refreshment stand in the lobby that had a gigantic popcorn machine that spilled out beautiful white kernels of the snack. I watched on tip toes as the worker scooped up the corn and poured it into a red and white box. I think a box was only a dime. I learned to tear away one end flap to make a hole that I would use to funnel the kernels into my mouth. That way I wouldn’t spill any and could be assured I would not be asked to share. Well, maybe that’s selfish, but it was what it was.

I remember a few times when I watched the big greyhound bus pull in and park in front of the Rexall Drug store, the driver unloaded several metal film canisters from the baggage compartment. The man who ran the projector always met the bus and would trade the used canisters and deliver fresh ‘stills’ (pictures) for posting coming attractions. All were carried up through the little side door that 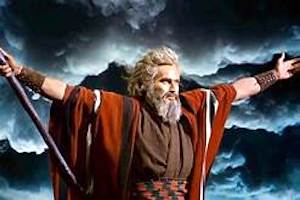 led to the balcony and the projection room. Over the years I watched this exchange over and over. I learned that most movies had at least three reels and some had many more. I have no idea how many it took to play “The Ten Commandments,” or “Cleopatra.” These were so long they had an intermission! That was a great time to stock up on some more candy or popcorn.

It seemed like magic when reels changed so quickly that no one in the theater even noticed! That took real timing and skill, at least in my mind. One time, the projectionist let me into the projection room so I could watch how to change reels. He showed me how a little signal flash would appear on the screen that told him when to switch projectors. Quick, in a flash, one projector would go off-line just as the other came on with the same image. Wow! The projectionist would then rewind the used-up first reel and load the third and final reel for later.

I saw some great films that were classics by anyone’s definition. Hollywood was at its zenith and had multiple studios competing for their market share and fame. Some movies that come to mind reinforce the concept that Hollywood was raising the level of sophistication of America, and not merely entertaining us. Slowly, over time, we looked beyond those fairy-tale outcomes and amazing heroes. We had to face some of the ugly truths of life as we grew up. Movies, at first were careful to have morals. The recap at the end of some stories assured that the message was not lost.

The weekly serials also kept us on edge. Whether it was the ‘Invisible Man,’ ‘Rocketman,’ ‘Captain Marvel,’ ‘Superman,’ ‘Batman,’ ‘The Green Arrow,’ or ‘Flash Gordon,’ they kept us coming back to see how the hero avoided certain death. 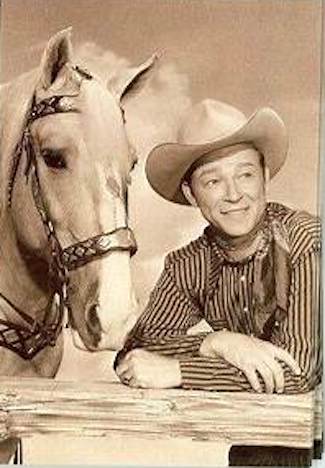 As I grew older I also saw some other classics including, ‘South Pacific’ with Mitzi Gaynor, a story about racism and war; ‘The Wizard of Oz’ with Judy Garland that gave a little girl hope and a faith in friends; ‘It’s a Wonderful Life,’ with Jimmy Stewart, was about the value of friendship over wealth; ‘A Miracle on 34th Street,’ with Natalie Wood, tells us that faith can have value; ‘Pride of the Yankees’ allowed the nation to mourn over a great role model played by Gary Cooper. Mister Cooper played ‘Sergeant York,’ a WWI hero and who again acted in ‘High Noon’ with Grace Kelly, another hero doing his duty against all odds; ‘Frankenstein’ and ‘The Bride of Frankestein,’ with Borris Carlof scared us silly; ‘The Pit and the Pendulum’ with Vincent Price was a nightmare focusing on being buried alive; ‘Ben Hur’ and ‘The Ten Commandments’ with Charlton Heston were Biblical dramas that made Bible stories come alive. There was ‘Spartacus’ with Kirk Douglas bringing history and mythology to the screen; ‘Singing in the Rain’ with Gene Kelly and Donald O’Conner; ‘White Christmas’ with Bing Crosby brought entertaining musical love stories to us. The ‘On the Road’ shows with Bob Hope and Bing Crosby were silly, but fun. ‘Gone with the Wind,’ with Vivian Leigh and Clark Gable was a film classic about the Civil War that broke the profanity barrier. This movie set Hollywood free to push the limits of innocence. We saw ‘Arsenic and Old Lace’ with Cary Grant, who was to be a friend for years with his dry humor. Later he and Grace Kelly would ‘grace’ the screen in ‘To Catch a Thief,’ filmed in Monte Carlo. This brought big changes in her life when she married royalty and became a real princess.

As we became teens, we saw Elvis in ‘Jailhouse Rock,’ and ‘Love me Tender’. We saw ‘Journey to the Center of the Earth’ with Pat Boone, and ‘Twenty-thousand Leagues under the Sea’ with Kirk Douglas and James Mason; ‘The Greatest Show on Earth’ and ‘Elmer Gantry,’ both starring Burt Lancaster was exciting. Cleopatra’ with Elizabeth Taylor, ‘Picnic’ with William Holden and Kim 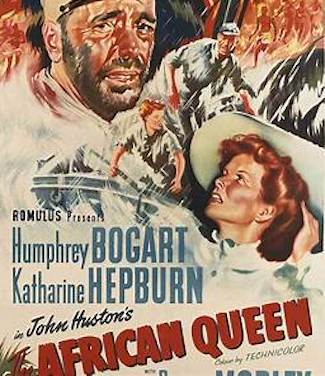 Novak, and maybe the best of Hollywood, ‘Citizen Kane,’ with Orson Wells and Joseph Cotton were all shown on the bid screen.

Who could forget the films by Alfred Hitchcock? His movies were the scariest things to which the American public was ever subjected. The worst, or best, depending upon your outlook was ‘Psycho,’ followed by ‘Rear Window,’ ‘Vertigo,’ ‘The Man Who Knew Too Much,’ and ‘Birds.’ All of these came along after we’d been scared by ‘The Blob,’ and ‘The Monster from the Black Lagoon,’ and others of a similar nature which today we regard as silly.

All along we had Ginger Rodgers and Fred Astaire dancing throughout the era and Sonja Henning skating with her delightful smile. Esther Williams swam and swam just like the famous ‘little fishes’ in many movies. Boop boop dit-tem dat-tem what-tem Chu!

Yes, our generation saw some great movies including ‘Yankee Doodle Dandy,’ and ‘The Fighting 69th,’ both staring Jimmy Cagney. Then there was ‘The Public Enemy,’ and Edward G. Robinson in countless films like ‘Little Caesar.’ We saw Marilyn Monroe in ‘Some like it Hot,’ ‘Gentlemen Prefer Blonds,’ ‘Seven Year Itch,’ ‘Bus Stop’ and ‘Misfits.’ We had Humphrey Bogart in ‘Casablanca,’ and ‘The African Queen.’ We saw tons of war films like ‘12 O’clock High,’ but my favorite was Audie Murphy, the most decorated soldier in WWII, in his own story called ‘To Hell and Back.’ I had already read his book before seeing the movie. This time Hollywood followed the script. After all, they had the guy who was there to give technical advice.

In our teens and early twenties we came to love stars like, Clark Gable, Jimmy Stewart, Bob Hope, James Cagney, Glen Ford, Gary Cooper, Kim Novak, Betty Gable, Grace Kelly, Katherine Hepburn, Audrey Hepburn, Richard Harrison, Humphrey Bogart, Cary Grant, and many others who were our role models in life. To many of us, these examples were lessons on personal character, good and bad. Hollywood did a decent job with this but soon enough they were teaching us alternative values that thickened the soup. The differences between good and evil became less clear. Producers became less interested in uplifting movies but instead focused on what was often the negative and ugly. The new ideals were more entertaining, but less worth emulating. What we lost in innocence, we gained in sophistication. 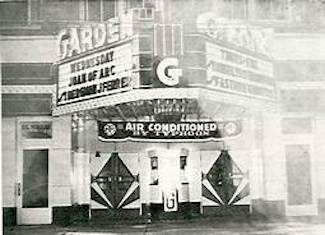 How much did the Garden play into this growing up? Well, TV had not yet become of age, so the movies were the single source of entertainment. They helped us experience various cultures without being threatening. The Garden Theater’s role was bigger than we might think. It gave us role models and ideals that became the fabric that influenced our understanding of life. The movies I’ve mentioned were classic and foundational for us all. Even in my advanced years I can still remember the words to ‘Zip-A-Dee-Doo-Dah’ and still find joy thinking about a Blue Bird on my Shoulder.

Yes, life has its wars, and temptations that had negative effects, but in retrospect, they helped us grow up. I found it useful to focus on good things and remember the happy endings in movies of another era. In those days they seemed to support our faith in God and in America. That is worth remembering.  mcoburncppo@aol.com