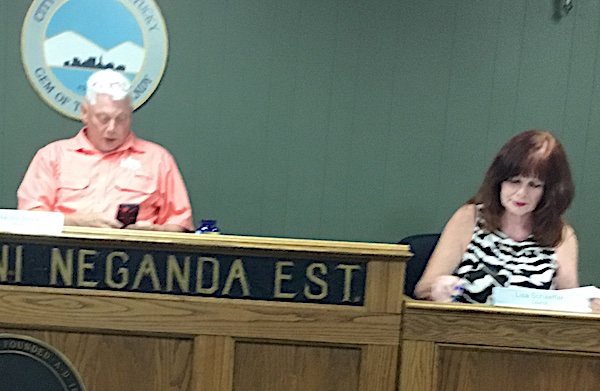 LOUISA, KY. — The Louisa City Council held a special meeting on Tuesday evening, July 20, annexation and city code enforcement were the two main topics of discussion during the session.

The July session had been delayed by a week, due to not being able to get a full gathering, as several council members were on vacation.

Mayor Harold Slone told the five of the six council members present (council member Tom Parsons was absent from the meeting) that he had received a proposal from Mike Shapaka of P & A Engineers (Mr. Shapaka is also the county’s elected surveyor) concerning the survey work that would need to be done if the city pursues annexation along the route Ky. 2565.

“In order to annex what we proposed way back when we discussed it, there’s going to have to be surveying done. This time, it’s not going to be simple,” Mayor Slone said.

Mayor Slone said that the surveying would be “much more complex because of where it is, that it was not going by road boundaries, and that it would be necessary to be surveyed.”

Mayor Slone said that a survey and coordinates from a previous annexation plan many years ago are not accurate and a new survey needs to be conducted.

The annexation proposal, which was originally discussed a few years ago and revisited by the city council at its April 2021 & June 2021 meetings, includes the area along Ky. 2565. Mayor Slone said at both the April and May meetings, that numerous businesses on Ky. 2565 are not located in the city limits, including KFC, a new dialysis center, a Marathon station and numerous medical facilities.”

“Even the city garage is not within the city limits.” Mayor Slone said.

The mayor said that when the city council previously addressed annexation a few years ago, three options were discussed: doing nothing; annexing the business district on Ky. 2565; or annexing Ky. 2565, along with Springhill and Highbottom areas.

The city council voted for the option for the Ky. 2565 business district, with the next step of the process being getting the exact boundaries on an official map. Spring Hill and High Bottom are NOT part of the annexation plan, Slone emphasized.

P & A Engineers submitted a $32,500 proposal for a new survey, Mayor Slone asked the city council members if they wanted to accept it or have him seek a second proposal from another surveyor. City council member Ashley Caudill suggested soliciting another proposal and the council agreed.

When city council members asked the mayor how much tax revenue the city would generate from the proposed annexation, Mayor Slone said he remembered an earlier estimate was about $30,000, based on $14 million of property assessment.

“If we annex them, then their water goes down, their trash goes down, their fire fee goes away completely because they get it for free then,” Mayor Slone stated. “So, when you balance it out, it’s like the city does gain a little tax revenue and the water loses it, because the water and sewer rates go down. Trash loses it. The fire district loses it.”

The lone civilian attending the city council meeting, who happened to live along a part of KY. 2565, and also owned several rental properties in the proposed annexation areas, Mikie McKinney, asked Mayor Slone what it would take to have a vote on whether residents who live in the area of 2565  could vote on whether to be annexed by the city if they did not want to.

Mayor Slone told McKinney that first, city would have to complete the annexation and that then if residents who lived in the newly annexed area and would be part of the city that there would need to be a total of fifty-five percent (55%) of those who lived in the newly annexed areas to sign a petition that would need to be verified and when verified, could be placed for a vote in a special election process.

Mayor Slone was puzzled by why McKinney and others who lived in the proposed annexed areas, about why they were against it, to which McKinney stated that he had spoken to people who lived in both rental and owner homes residences that they had no desire to be a part of the city. That led to the mayor Slone responding once again to his earlier statement that those who will get annexed into the city and that their numerous utilities will be going down including water, sewer, fire fees, and trash.

“Those new annexed city residents would save alone around $100 a year on their trash bill, basically eight dollars less a month in savings than what you’re paying for now,” Mayor Slone cited in his response. 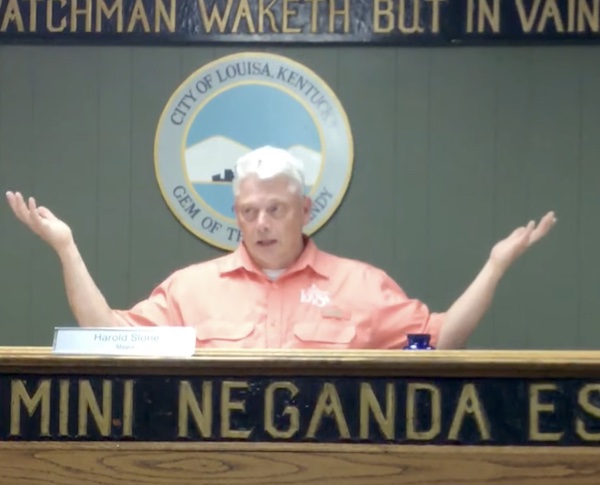 The city council also discussed during the meeting about creating a code enforcement board to hear appeals concerning violations of the city’s nuisance ordinances.

This was a follow up to previous discussions about establishing a code enforcement board at the previous June 2021 city council meeting.

Mayor Slone said under the city’s current procedure that the city’s code enforcement officer issues a notice to violators and asks them to correct the problem.

If property owners disagree with the finding, they can appeal to Lawrence County District Court.

City council members asked Louisa Attorney Bud Adams to draft an ordinance that would create a code enforcement board that would include one member who would act as a hearing officer. Those given citation tickets for violations would be able to appeal to the city code board and continue to district court if they are not satisfied with the outcome.

Louisa Police Chief Greg Fugitt stated that detective officer Hunter James would be the city’s nuisance code enforcement officer full time later this year, and he and Mayor Slone both said that there was extra money set aside in the this year’s city budget that would be used to hire a new police officer, to take the place of the full time street patrol position that officer James is assigned to. This would bring a total of seven full-time police officers to the Louisa city police force.

In the early part of the meeting, Mayor Slone told the council that the city’s swimming pool brought in $34,770 in revenue since it opened on June 1, which includes money from party rentals, the swim team, swimming lessons and general admission. Mayor Slone said the city pool’s revenue was “up a little bit” from previous years.

Mayor Slone also updated city council members on the revenue the city receives from alcohol sales. Mayor Slone said the city budgeted $130,000 for 2020; and that city got more than expected, as they collected $162,825, leaving a $27,825 surprise surplus.

The mayor said jokingly that local residents were feeling down on their luck due to the COVID-19 pandemic, and that the alcohol sales were boosted by the need for coping “must have spurred some spirits.”

The next city council meeting is tentatively scheduled for Tuesday, August 10, at 7:00 P.M.
ShareTweetShareSendPinShare
Next Post