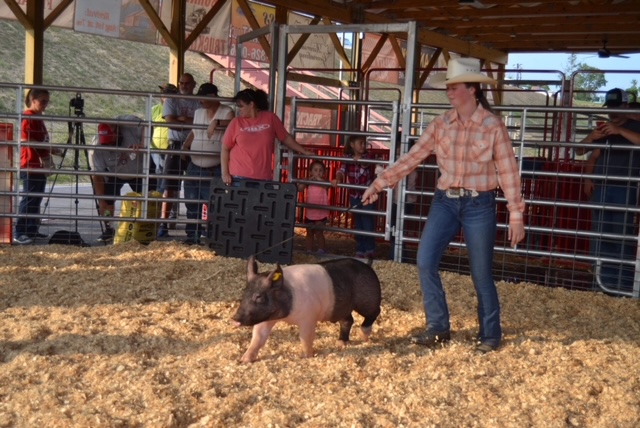 The 2021 Lawrence County, Ky Fair opened Thursday with a flag dedication and the VFW flag raising ceremonies. Lawrence County Judge Phil Carter began the ceremony with welcoming everyone to the 10th annual Lawrence County Fair and dedicated the fairgrounds.

Carter discussed the cumulative effort of county, city, and all those involved in the project.”What once was a dream, now is becoming a reality,” Carter said.

A VFW member commented on how the fairgrounds had been long coming and was very proud of everyone involved.

Louisa Mayor Harold Slone also welcomed everyone and congratulated the fair board and county workers on a job well done. Rick Blackburn, president of Lawrence County Fair board, thanked all the sponsors and all those involved in creating the fairgrounds. He went on to run down the list of events for the week.

Shortly before the flag raising ceremonies the fairgrounds began to fill Up with churchgoers, exhibitors, parents, grandparents and fans of the livestock exhibitors. The smell of pork and brisket was lingering in the pedway.

Livestock exhibitors began changing from shorts and T-shirt shirts stained with sweat both human and animal, as they were preparing the arenas, stalls, and animals for exhibition all afternoon to jeans, button ups, and boots.

Program Assistant for Lawrence County Extension Service, Maelyn Huff said she was excited at how much the fair had grown since she was in it with her FFA officer team.

“I have not seen so many people at the fair on a Thursday night,” she said.