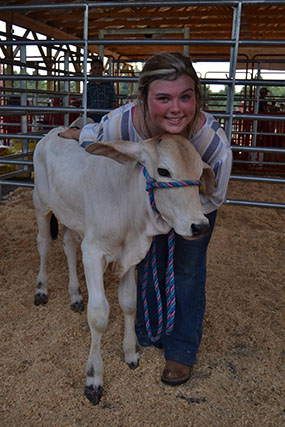 Next up was the market lamb division with 5 exhibitors. According to Jackson Droze, a JR division competitor and class grand champion, sheep are one of the harder animals to train and his least favorite in the three categories he exhibited in. While the grand champion went to Citori Branham and reserve was Alex Boggs, Emma Salyer was third, all exhibitors performed well. Many of the exhibitors like Abby Holley, this was their first time showing livestock.

Best of Show in the sheep division was Citori Branham.

Next up was the swine division. Wyatt Branham, a veteran swine exhibitor, stated while this is not the largest market pig he has grown, it was still fun to watch your pig grow from 2-3 pounds at birth to 186 lbs in 120 days. Normally he would get pigs born in January, however breeders weren’t sure what was going to happen with fairs this year and breeders held off on breeding some sows.

Kynnzlee Shannon won the clover bud division. The last division to be exhibited was the cattle division. Winning Grand Champion in the JR Division was Jackson Droze with Buckets a Brahma steer. Amity Vance took Grand Champion in the Sr division with Norman. She said when she first started bottle feeding him she never dreamed they would be entering the fair, however she has enjoyed the task and looks forward to next years fair. Sr. Showmanship grand champion was Amity Vance and Abby Holley got reserve champion followed by Alexanderia Boggs.

This was the conclusion of the large animal livestock show. If you are interested in joining the 4H livestock club please contact the Lawrence County Extension office.

A great service was had by all and everyone left blessed!