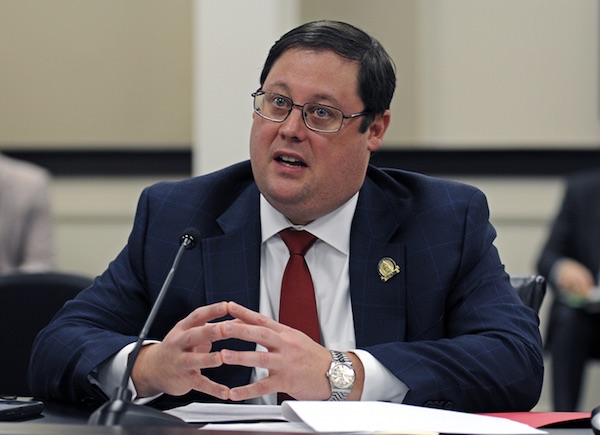 Nearly two months of the 2021 Interim are on the books, and the Kentucky General Assembly remains focused on pressing issues in preparation for our return during the 2022 Regular Session next January.

Recent focus has turned back to increasing rates of COVID-19 cases, most notably the “delta variant,” as the state’s positivity rate has crossed back over the six percent positivity rate. Forty-five percent of the state’s residents were vaccinated when this legislative update was submitted. I encourage you to remain cautious and to choose to take the necessary measures to protect yourself and those you love.

While vaccinations are not foolproof, they have proven effective by substantially lessening the odds of catching or transmitting the virus and significantly reducing symptoms in those who contract it. I encourage you to consult with your trusted physician to determine if it is right for you. One thing is certain, we can be grateful for Operation Warp Speed championed by the Trump Administration that made safe vaccines available in record time during this once-in-a-lifetime pandemic. Scheduling appointments for your vaccination is quick and easy. Just visit vaccines.gov/search or kycovid19.ky.gov to find locations near you.

In the IJC on Local Government meeting, we were joined by members of law enforcement for updates on the challenges they face. Committee testimony from guests called for attention to the staggering shortage of police officers. Our state and nation have endured a difficult past eighteen months. Tensions have been high, as bad actors in our streets have led to an increase in serious crimes. Meanwhile, our law enforcement personnel have recently endured unreasonable levels of criticism and even calls to defund departments.

During the IJC on State Government meeting, lawmakers were presented with Census data and how it will impact the biennial redistricting requirement. According to data provided, Pike and Martin Counties had a loss of more than 9 percent of their populations, Elliot and Morgan Counties between 3 and 9 percent, and Lawrence County less than 3 percent. Strengthening our region to keep more of our people and brightest minds here is critical. I am committed to that goal.

The emphasis during this meeting was on Judicial redistricting, which has not been done in Kentucky since the 1890s. Supreme Court of Kentucky Chief Justice John Minton noted that at that time, Kentucky had just its first governor and the President of the United States was Grover Cleveland. Judicial redistricting is overdue and redistricting efforts will assure Circuit and District Court Judges will be distributed to areas of need.

On July 7, the IJC on Appropriations and Revenue included a visit from the state budget director, who provided an update on federal funding received in response to the pandemic. Most have heard of federal stimulus packages such as the Coronavirus Aid, Relief, and Economic Security Act and the American Rescue Plan Act. In total, however, there were seven separate bills passed by congress that allocated funds to Kentucky. Some of those precious taxpayer dollars are now flowing through various state agencies after being prioritized by the Kentucky General Assembly. During the previous legislative session, lawmakers allocated about half of the Commonwealth’s recent stimulus funds. There is just over $1 billion more left to be distributed. We intend to remain as diligent in appropriating the rest of the funds as we were before.

Notable investments were made with the first half of federal funding allocations. Funds were appropriated to grow the state “rainy day fund” to over $1 billion, expand broadband internet, pay off most of the $800 million federal unemployment insurance (UI) loan unilaterally taken out by the Governor’s administration, address water and wastewater needs, and much more.

An entire legislative update could be dedicated to an A&R committee meeting alone. I encourage you to find archived footage of the meeting for more details. That is available at ket.org/legislature/archives.

On a related note, cities here in our 31st Senate Districts will be receiving the following amounts shortly from the Commonwealth of Kentucky as part of the American Rescue Plan:

Beginning back in 2016, as majority control of the Kentucky General Assembly flipped, lawmakers began to budget more responsibly, modernize the state’s tax code, and strive for economic excellence. Five years later, we are reaping the rewards of seeds sown years ago.

A meeting of the IJC on Agriculture welcomed guests from the company AppHarvest, which is a company focusing on controlled environment agriculture. The company made its first investment in Kentucky in the amount of $82 million back in 2019 and currently employs over 505 Kentuckians. AppHarvest has since made several other announcements of expansion in the state. They are committed to seeing our beloved Eastern Kentucky grow and prosper, and many of their investments are being made to do just that. I am grateful for their attention to the wonderful people of Eastern Kentucky. Representatives spoke about AppHarvest’s continuing growth and how Kentucky can be the leader in securing America’s food supply chain. We have hardworking farmers all over our Commonwealth, and with 70 percent of the U.S. population within a day’s drive of our borders, America depends on them.

It is an honor to represent the 31st District in the Kentucky State Senate. Should you have any comments or concerns about these issues or any other public policy issues, please do not hesitate to contact my office. You can reach my office toll-free at 502-564-8100 Ext: 714 or by emailing me atphillip.wheeler@lrc.ky.gov. God bless.