Fort Gay, W. Va. — Todd Maynard came to Tolsia four years ago to change the culture of the boys basketball program and boy did he ever but being closer to his family was one of the main reasons he resigned Wednesday afternoon.

Todd Maynard talking to his team prior to the sectional championship game against Tug Valley. 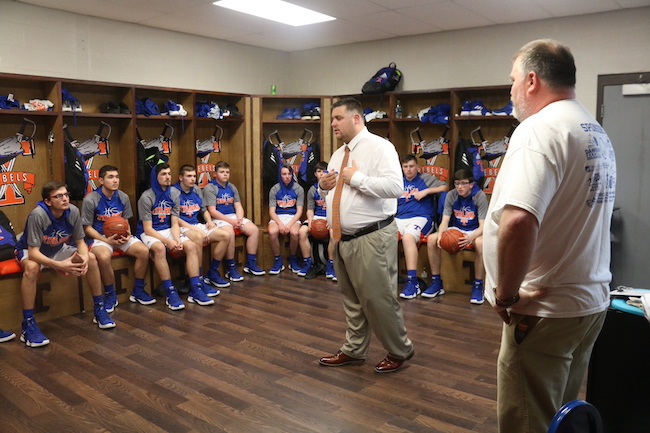 Maynard a Spring Valley native will be taking a teaching job ten minutes from his house at Huntington high and will also be taking over the boys basketball head coaching position at St. Joseph Catholic in downtown Huntington.

Maynard took over a Rebel program in disarray in the summer of 2017 and with his work ethic and vision turned the program into a must see event. His team went 6-15 that first year and then went 38-25 the next three seasons including a sectional championship in 2019 the schools first since 2012.

His teams beat rival Tug Valley four times during his tenure including a road victory in Naugatuck for the first time since the early 2,000’s. Beat county foe Spring Valley twice this past season and a road victory over Class 4A #3 Huntington as well.

Maynard spearheaded facility enhancements Rebel Arena along with creating media and marketing for the student athletes.

“… This decision has been one of the hardest decisions in my career I have ever had to make. I will be starting a new chapter in my teaching and coaching career. I will be teaching business at Huntington High School and have accepted the Head Basketball Coaching position at Huntington Saint Joseph Catholic High School. I am excited and thankful for the opportunity that both schools have given me.

“…Deciding to leave Tolsia has been a stressful process for me and my family. The school and community have given me an opportunity to teach and coach that I will be forever grateful! The past 4 years in our basketball program we seen so much growth and excitement in the program. I want to thank everyone who was involved in the last 4 years from helping me with my vision such as facility upgrades, fundraising, operations for games, etc. There is no question the past 4 years we took a small school and made it as big time as we could for our players and the community! As a coach when you look back all you can ask yourself did you give the program your best energy everyday and did you leave it better than you found it? I know I have given this special place 100% every day!

“…What I will miss the most are the students, players, and my assistant coaches who I love dearly with all my heart! Once again thank you, Tolsia, for loving me as your own and I will always love You! I will always root for Rebel Nation!”

GROWING UP IN LOUISA: Summer Camps