GROWING UP IN LOUISA: To the Roller Rink

To the Roller Rink!

When I was a teenager, I spent a lot of time in a special building located at the edge of town on the road to Paintsville. It was located next to the Flat Top Inn and Pannell’s Pontiac dealership. The outside appearance was non-descript since it didn’t have any windows, or at least none that I recall.  It was a long, deep structure that extended way out over the little valley behind it. Inside, it had beautiful hardwood flooring, which was suitable for its function.

The roller rink was only a short two block walk from my house. I took South Clay Street until it ran out onto some low-land with a small creek. A path led across the bottom land. When the bottom was muddy or flooded, I had to walk a couple of blocks further west to the highway I had learned to call the ‘Mayo Trail.’ I only had to go perhaps a quarter mile to arrive at the rink. I made those trips maybe once or twice a week for several years, starting when I was a young teen.

The roller rink had a place to rent shoe skates in case you didn’t have your own. Otherwise there was just a small entrance fee. The skates we had to use had wooden wheels and were very different from those aggravating metal things designed to clip on and use outside, on concrete. I remember having a pair of the street models that I bought at the Western Auto store downtown. They were meant to clip onto the soles of our shoes. The clip-on devices allowed us kids to skate on sidewalks, but nearly every time I used those stupid things one or the other would come loose. That would send me into a rolling heap on the hard street scrapping my elbows and knees. I became very acquainted with every bump in the street, or crack in the sidewalk for that matter. You see, I had met them personally, really up close. The downtown sidewalks in those days were too crowded with people to make skating safe, so only the side streets were used. Only a few of those had sidewalks so it was all about us trying to skate while looking out for traffic. In the process I discovered that skates don’t roll on dirt or grass. Who would have thought?

The shoe skate rental section of the roller rink had long rows of skates lined up on shelving. The black ones were for men and the white ones were for the ladies. Once or twice they were out of black shoes in my size and I was offered whites. Having some pride and fearful of the remarks I’d get from others, I chose to simply not skate that night. People’s opinions and comments mattered to me since, after all, I was a teenager. Peer acceptance was important. I could feel the stare of my fellow males should I be seen sporting around in white shoes.

Each of the rentals had the size painted on outside of the heel so they could be quickly identified and traded for the shoes we had worn to the rink. By keeping our shoes they were assured we’d return to check out the shoe skates. The skates had big rubber disks on the front to be used for stopping. That took a little skill but was soon learned. Once we had slipped into the rental skates it was only a short distance to the heavy rail fence that separated the skating area. The railing was made of up painted steel pipes. This also separated the skating floor from the ‘waiting/watching’ area. 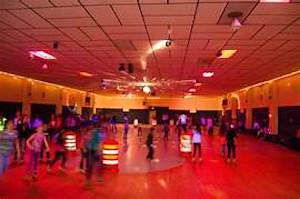 The skating took place in an oval pattern running the length of the skating floor. Usually the direction was counter-clockwise, but at some point into the night the announcer would give notice of ‘reverse skating.’ Now that was an unnatural switch for me and took discipline to comply.  The wear on the wooden rollers was such that the shoes wanted to go the normal direction. Later, after building up my skill level, I would hang out in the middle doing spins, turns, etc.

Beginning skaters were ‘wall huggers.’ Those guys and gals would try to move along without falling by holding themselves up with the railing or cinderblock walls. Frankly, to make it to the other end without falling was a trick for some, and I might say, a bit comical. The more experienced skaters avoided going anywhere near those walls lest they be tripped by falling bodies. The faster folks, usually an older teenager, would skate near the very middle. Now, this was a restricted area that was patrolled by a whistle-blowing, very skilled, king-of-the-rink, type of guy. They sometimes wore a basketball referee’s striped shirt while they continually skated in small circles, often backwards, to watch for safety issues for the skaters. When he saw a collision or pileup of people he would come to the rescue, helping those struggling people to their feet. He would also stop any horseplay or ‘whip-line’ skating that could cause harm to others. What a hero!

As my personal skills improved I learned to do circles, and leaps, and skating backwards around the rink, sometimes learning new techniques from the ‘kings of the middle.’ Considering how tall, lanky and skinny I was it must have looked comical when I ‘showed off.’ About the time that I would really get in the groove, so to speak, an announcer would come out with another command. “Ladies Only.” Well, okay. I took my seat and watched the pretty little things go around the course in circles. Some were as skillful as me or even better, but most traveled with one eye on the wall, one eye on the traffic and somehow as a third eye on the floor. Well, a good spill was entertaining as long as no one was hurt. 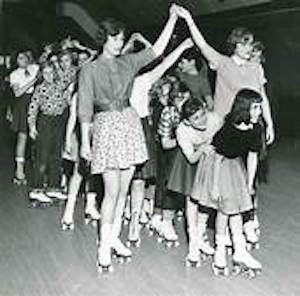 “All Skate,” was the next command. It seemed as if a homestead land rush had begun again as the guys flooded onto the floor. The poor girls were in the middle of a swarm of speeding fellows with varying skills headed right toward them. Conversely, the girls were heading off the floor if for no other reason than to save their lives or to gain composure. “Couples Only,” came blaring out over the speaker and the music changed to a waltz. Guys scrambled to get a partner, something they were slow to do at dances, but quick at the rink. Go figure.

I loved it when I was skillful enough to skate with a girl. Sometimes they weren’t all that confident, but I could actually hold them up if they tripped slightly or got a little off-balance. One arm went around their back to hold their hand and the other held their free second hand. Good couples skated as if in a ballet, often swaying to one side and then the other. It was actually romantic to me. The lights were dimmed and it was a magical moment. The overall pattern we skated was a big figure eight. After turning one corner or the other the better skaters would sweep out toward an outer wall, traffic permitting, and then back to the middle section only to swing back toward the wall prior to rounding the next corner.

Skating this way with the vibration of the wheels against the floor would invariably raise blisters, even on the feet of the better skaters. A solution was thought to be to wear two pairs of socks. I certainly did that and found it did help, but spending too much time on the floor was rough on the feet. Worse yet was when it was time to walk back to the rental area to turn in the skates and reclaim my regular shoes. My feet were now so accustomed to the height and weight of the skates so I couldn’t walk easily. I had lost a good four or five inches in height. I would step toward the floor but it wasn’t there to meet me. Wow! In time I learned to expect that feeling and actually thought it interesting that my body could be fooled like that.

There were skating parties, spotlight skating, and other games that were enjoyed by the crowds. This was a really good diversion for the youth of our little town. It wasn’t particularly expensive, but still it did take some money. I saved up for a long time to buy a pair of Chicago shoe skates, but never had enough money to buy them before I left for the Air Force. I’m sure part of the reason was that I had started dating and was distracted from my goal. I guess goals change sometimes. When I was in the Air Force I did buy a pair of skates and went to some local rinks a few times. It just wasn’t quite the same because my friends were not there. I sold my skates and quit going.

Many years later my teenage daughter was invited to go to a skating party. I was invited to attend as one of several accompanying parents, so I told her I would go. She began to tell me that I really didn’t have to skate because, after all, I could hurt myself. When I put the shoes on I frankly didn’t know if I was going to remember how to skate. I took one careful tour of the floor and Kendra was amazed that I hadn’t fallen. While she was proud, she was still skeptical that I would survive the evening. When skating with her holding hands, I decided to try something, so I circled around in front of her and began skating backwards, pulling her along. Her eyes were like saucers. I showed her that her old dad wasn’t entirely the clumsy man that she had thought on roller skates.

I went through the same scenario later with one of my sons, but what I showed him was that dad really makes a loud noise when he falls! Yep, the skills were forgotten, gone, disappeared. With egg on my face after several more falls, I took a welcomed seat in the spectator area. Sometimes you just ‘have to give it up!’

Yes, skating was a big part of my life for a time, and tons of fun. Lots of my friends spent time at the rink, especially during our early high school years. As I mentioned, dating uprooted the habit, but I still remember. Maybe I saw you there.