ALTERCATION IN RURAL MAGOFFIN COUNTY LEADS TO SUSPECT OPENING FIRE ON ANOTHER MAN, RESULTS IN GUNSHOT WOUND TO THE VICTIM’S FACE 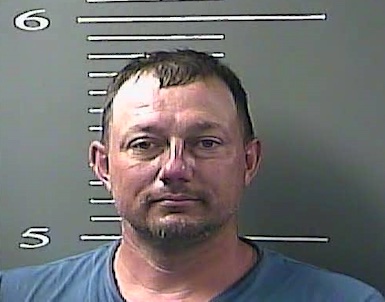 A Magoffin County man remains in jail on an assault charge, after allegedly shooting another person in the face during this past weekend .

According to a press release statement from the Kentucky State Police Post 9, in Pikeville, Ky., they reported that Michael Paul Perkins, 41, of Salyersville, was arrested on Sunday afternoon, July 11.

The initial KSP investigation indicated an altercation between Michael Paul Perkins and Bobby Stephens that resulted in Stephens suffering from a gunshot wound.

Bobby Stephens was transported to Paul B. Hall Regional Medical Center in Paintsville, and then subsequently flown to Cabell Huntington Hospital in Huntington, West Virginia.

As a result of the KSP investigation, Michael Perkins was arrested by trooper Joshua Scott, and was charged with one count of *ASSAULT, 1ST DEGREE; a Class B felony punishable by from 10 years, to up to 20 years in prison.

KSP Post 9 Detective Jason Merlo is leading the investigation. He was assisted on scene by KSP personnel and the Magoffin County Sheriff’s Department.

Michael Paul Perkins is being held in the Big Sandy Regional Detention Center on a $50,000 full cash bond.

LOUISA POLICE, COUNTY SHERIFF TO SPONSOR 'BACK TO SCHOOL BASH' AT CITY POOL