Louisa, Ky. — It was an absolute beautiful day at Luke Varney Jr. Memorial Stadium as 68 kids showed up for the first ever Gerad Parker Football camp on Wednesday. 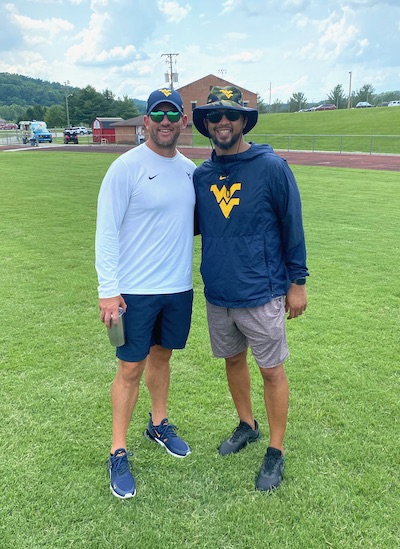 “… It was humbling to be honest with you, to get up this morning it wasn’t a Friday night but it was a Wednesday morning to walk across the track the way I used to with a pair of cleats on and see some familiar faces even though I hate to admit that we are getting a little bit older. It was great to the track and building we used run from to the goal post from the Breathitt Co. game. Just a lot of memories come rushing back and you can’t help be get emotional. I seen old teammates, classmates, friends and old coaches that I haven’t seen in a while. It was really great to be able to give back a lot of people ask why and I just tell them I wanna do something to honor home and home is a lot of things. We have moved around so much but the Louisa area, Lawrence Co. and even across the river will always hold a special place in my heart. To see kids from all over the place here today was really humbling and really cool.”

“… I fell in love with baseball first and that kinda ran its course but I did learn how to win and compete a little bit. Then basketball with Wallace Dillon and got into that and then you know what struck me about football besides making a deal with Jason Micheal what I noticed was how they started win and compete and who doesn’t wanna be apart of that. It was Fred Dean and Jason and they had a bunch of good players and we won a lot. Football made us winners and that is contagious so probably the game of winning started it.”

“… Me and Jason Micheal made a deal that I would play football if he would play basketball  but he broke his ankle the last game of the year against Highlands. He did play the next year so he held up his end of the deal. So that’s what got me started in football.”

“… It’s a special thing that we have going with the coaching tree from Lawrence Co. me and Dontae joke about it because most people don’t know where Louisa is. But I smile and am so proud of that. All jokes aside I’m very proud of that and not because I am a coach. It’s awesome what Jason Micheal and Dontae Wright have chosen to do and what Phil Ratliff paved that path it’s really really special.”

“ My father taught me how to break things down, I was teaching ball handling drills when I was 13 years old, Wallace Dillion was one the best coaches that ever impacted my life. Also Shawn Conley, Chuke Williams, Phil Ratliff . Those guys paved a path for us and them you go to college and other people start to influence but those guys here were key pieces in building all of us and they probably don’t get enough credit for that.”

“… I want to thank the parents for coming out here and sharing their kids with us on a Wednesday in July it was an humbling experience for sure and we can’t wait to do it again.”

“… It was special it brought back so many memories it humbles you because you see the love that you get when you come back home so special would be the word I would use. I throughly enjoyed it, these kids were great to Coach today I’ve known a lot of the other coaches a long time. It was a special day all around and I hope we can continue to do this year after year and keep building it and make it better.”

“… It’s really humbling to see parents bring them out on a Wednesday because the kids don’t know who we are. For them to hold Lawrence Co. football to such a high regard and to bring them out here and trust us to not only have some fun but to teach them and take care of them is very humbling and makes you feel proud that home does matter. Every where we go we talk about home thats something that me and Gerad talk about all the time. How special this place is and about the people that helped us along the way. I think it is our job to help them get out or if they decide to stay here, be the best that they can be. That’s our job moving forward and we take that very seriously and we are glad to be here for sure.”

“… Walking into here brought back 1999-2002 I came across the track and walked through the Dawg house for the first time since my last game here in 2001 it gave me goose bumps. I don’t get the chance very often to come back here because we can’t come and watch games and things like that. So it was a neat moment that game me goose bumps like I said. Just being out here and looking around and reimagining when we were playing Cabell Midland here they were 5,000 people but it felt like 50,000 were inside the stadium.”

“… Being three hours away is the closest I’ve been to home in a long long time. So that is great to get back to here whenever I want or my family to come see me. That is awesome and that is what you want. You want to be around family and you want be close to them. As for me and Gerad to do this together is really special as well. We talked about this in high school that this was what we wanted to do was coach. We started together in 2007 as GA’s at Kentucky and now we have come full circle in Morgantown. We have talked about Gerad Parker being Head Coach and Dontae Wright defensive coordinator hasn’t happened yet but it’s getting closer. I’m truly blessed to be able to do what I love and wake up everyday and Coach with my best friend, my brother I absolutely love getting to impact kids lives on a daily basis and help them achieve goals and dreams. To do it with my best friend and some one you grew up with is unheard of. It’s an awesome feeling.”

“… I just can’t say enough how awesome this day has been for the kids, I can’t tell you how many people made this happen. We had probably 12 coaches from the youth league and middle school, we had moms running the concession stand, we had people get the field ready, kids doing the technology and music part. We really pushed this camp online and we are one of the best around at putting things on social media and I don’t know of many around that has as big of an online setup that we do. We utilized that to make this a big event as we could.”

“… Obviously we owe a ton to Gerad and Dontae because they have went on from here to do such great things all around the country and we have them right in our backyard to come back to do this says a lot about them as people. Not much more you can say.”

“… It’s a huge deal for those guys to come back, not many youth programs around our area can say that two coaches for a power 5 conference like Big 12 offensive coordinator and a safety’s coach come back and run a camp for them that’s a really big deal.”

“… Being a youth league director is a year round job to make sure our kids have everything that they need and that they have the best chance to succeed. It’s not always about the wins and losses even though we love to win it’s bout the kids and it will always be about the kids. If we can put smiles on their faces we have done our job. If we can build these kids up we have done our job. I can’t do that alone, if I have one thing good in my time it’s surrounding myself with good people around me I get give you a list of 50 people and make it possible. It is true that it is a lot of work but it’s also true that it is a lot of fun. People ask me a lot what I do for fun and I tell them that I coach football and I do football stuff, my son plays and my daughter is a cheerleader and me and my brother played football at Lawrence Co. so it’s in my blood. I have been blessed to be able to give back with my time and I’m so thankful for that.”

“… To see one kid from Lawrence Co. go from making D’s and F’s and sitting in the back of the class with no friends and playing video games all day to after playing football for a few years to be sitting in the front of the class and making A’s and B’s, to know how to pray to know how to act. Their is so many lessons that you can learn from playing football. I grew up without a dad and football for me was an escape and and opportunity to turn that situation into a positive and I try to do the same thing for these kids. It was therapeutic for me and I’ve seen the same thing in kids throughout my years. I’m truly blessed to be doing what I’m doing.”

“… It was awesome getting to witness Gerad and Dontae come home and sow into our kids. Seeing them be in their element and interacting with the kids, old friends, teammates, and coaches was something special. Can’t thank those guys and all of our volunteers enough, we can’t wait to do it again next year.”