by BO BRUMFIELD
in Sports
Share on FacebookShare on Twitter
Louisa, Ky. — Lawrence Co. Cal Ripken 8U All Star team outscored their opponents 49-9 and went 3-0 to capture the District 3 Championship this past weekend at Stella Moore Park. 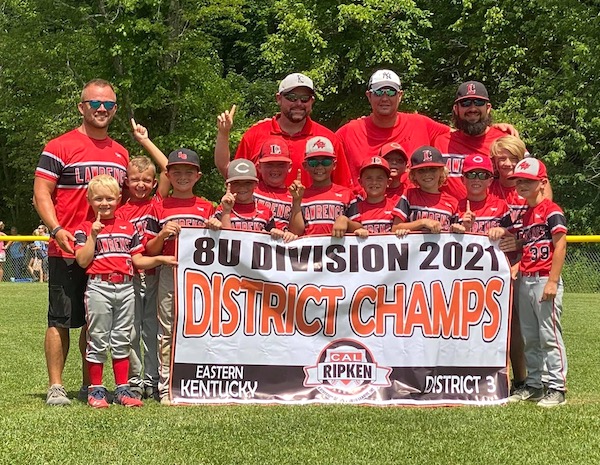 The Lawrence Co. 8U team beat Pikeville 14-9 on Sunday afternoon in the championship game.

On Saturday morning the Lawrence Co. All Stars took care of Johnson Co. 21-2.

The team will now compete in the state tournament in Lexington July 8-11 at Veterans Park.

In the 10U division Pikeville beat Lawrence Co. 12-5 in the second championship game on Sunday afternoon to capture the title.

In the first championship game on Sunday Lawrence Co. pinned the first loss on Pikeville 10-9 to force the final game.

On Saturday Lawrence Co. fell to Pikeville 9-7 and then beat Magoffin Co. 7-5 to advance to the championship game.

In the 12U Division Pikeville beat Johnson Co. in the second championship game Sunday night to win the title.

“… Honestly I’m speechless when thinking about the last four days at Stella Moore Park. It started Thursday night with the District 3 Softball tournament and our 8U team capturing the title and the 12U and 10U girls splitting two games. The place was packed with fans from Johnson Co. and Lawrence Co. who watched some good softball being played. We want to congratulate the 8U team on their championship and wish the 12U and 10U in the final game and all three teams in the state tournament this weekend in Louisville.”

“… On Friday the baseball tournament started and it was a u real moment watching all three LC teams come out with victories. On Saturday it was packed from 10:00 Saturday morning until Saturday evening and the baseball was top notch all day long. Our 12’s fell a little short on Saturday evening but I wouldn’t trade my team for any other team out there. I love to Coach those boys and couldn’t be more prouder. The 10s battled out of the losers bracket to battle for a title on Sunday and the 8’s absolutely put on a show against Johnson Co. Saturday morning.”

“… On championship Sunday our 8’s took care of Pikeville for a second time during the tournament to win the Championship and our 10’s battled all the way to the end before falling in the second game on Sunday afternoon. Both teams should make some noise at the state level.”