GROWING UP IN LOUISA: After dinner, family time

Favorite memories of growing up years are of those very special quiet times when our family, the neighbors, and friends, joined together to relax on the front porch following one of mom’s wonderful evening meals. This was a signal to all that the day’s work was done and it was time to visit, relax and unwind. At least for us kids, it was a calming time of light play, bonding with the whole family, and neighbors and making us ready to ‘hit the hay’ for a good night’s sleep. Many times, this ritual came with surprises, whether it was a ‘drop-in’ visitor, some special interaction we might have together, or even when the grownups and kids divided up to play some game.

No two evenings were the same. It was a time of relaxing and sharing those special relationships. It was an important time that healed the hurts and provided opportunity to share the burdens that come with life. This wasn’t a practice enjoyed by only my family, but to me it seemed to be a universal practice that was common in our community and a commonality across the face of America. It happened in big cities, small villages, towns, and on the farms. It happened in front of the brown-stone row-houses in New York City, and on the large spacious verandas overlooking the great Hudson River. It was a common thing on Cass Avenue in Detroit, and on the ‘hill’ in St Louis. It was happening on the west coast and down in the deep-south. A generation earlier even the pioneers traveling across the prairies practiced the same habit around the campfires after circling the wagons. It’s likely that Native Americans used this same time to pass down their verbal histories. It was an opportunity for everyone to escape summer’s heat and enjoy the cool breezes of twilight. Even the animals found their place as they returned to their hutches, dens, and roosts.

I know I loved it when the circle widened with a visit from friends. That affirmed and bound our friendship further. I remember when describing someone we often said they were a ‘family friend,’ which implied they were informally related and most important. Even the children understood and showed appropriate respect to those pillars of caring and trust. It was comforting and reassuring to have these relationships.

We relished hearing stories and jokes while we settled back, perhaps with a drink of lemonade, or a bottle of pop. I couldn’t wait until some juicy tale was dug up by someone. Granny called it ‘dirt from the past,’ but it wasn’t really meant as gossip, but almost always was funny instead. This was not a time for negation tales, but where memories proved that we are all human and prone to make silly, if not hilarious mistakes.

It was a way for family history to be passed down. On those special evenings uncontrolled laughter rang out when animated storytellers recanted yet another wild tale of their childhood. Some told of troubles when the parent’s good advice was ignored. Even as a young child, I know I hung onto every word. I didn’t want the evening to end. We lived by a motto ‘Work hard during the day, but always take time to enjoy the evenings.’ It was as if God himself had set aside those events for our well-being. They were good for our social, physical, and mental health. 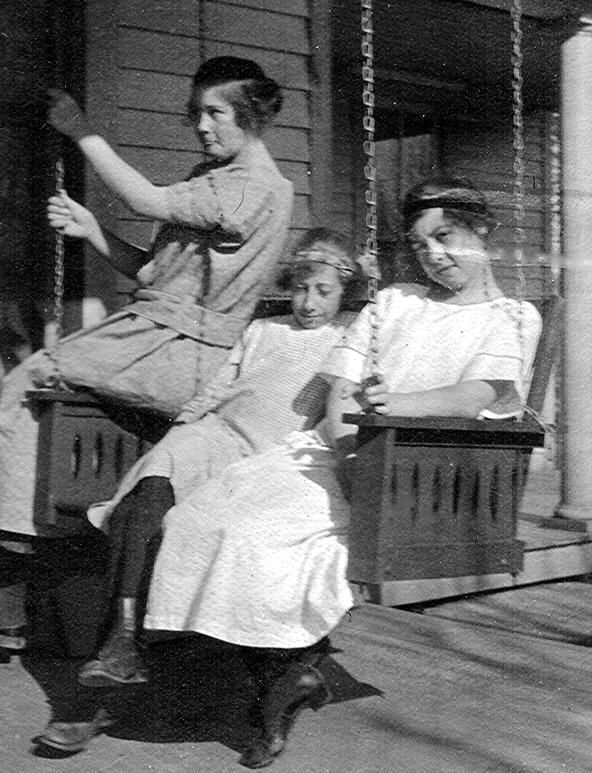 Some of my friends lived outside of town. During those days, deep in the hills and hollows of the Big Sandy Valley, electricity was still only sparsely available. For some, even when it had been installed, it was seen as too expensive to use unnecessarily. Electric lights were left turned off to save until they were absolutely needed or company came. Even then it was only in rooms that were being used by somebody. You see, things happened slower in the backwoods.

I know that in our area the great depression had its lingering effects. Pennies were still important and having a dime meant you were rich. Therefore, before and during dusk we tended to migrate outside where the twilight made it possible to see. Back then, the power grid tended to be temperamental, too, so we kept our kerosene lamps at the ready in reserve.

These family times were a good time also for the ladies to knock out some light work, such as sewing, knitting, crocheting, or shelling a basket of string beans. Since it was cooler outside and family was there, they could depend on having ample help to share in the light labor. I remember so clearly when I reached into granny’s apron for a handful of ‘half-runners,’ or ‘Kentucky Wonder’ string beans to break. All the little children learned to string beans at the feet of the elderly. We competed to see who could string the most. Granny inspected our processed bowls and rejected any that didn’t meet her standards.  I know that I wanted to help and to make my granny proud, so I was careful to do a good job. While working on the beans we listened to the adults tell news of our friends or relatives. It was during these times I heard the best stories of things that had happened years earlier when the grownups were still young. It was not unusual for a wild anecdote or two to crop up concerning an ancestor. This is where I learned about my uncles, aunts, cousins, and great, great grand-parents, some of which I never met.

Sometimes at these informal meetings we spoke about the challenges we were facing. Whether it was a bully at school, an upcoming need to conserve spending, or questions relating to schoolwork, it was a good time to share. It was here that I first learned to seek advice about my problems and to set goals.

I remember that it was there when we heard that a friend or neighbor needed help, perhaps brought on by an illness, or some other misfortune. We reasoned that if it affected our neighbors, it also affected us. I remember visiting families to ‘run by’ a meal, or to make plans for helping them in some other way. I knew of several times when a neighbor helped bring in a friend’s harvest, or split and stack some firewood. I even remember trying to find ways to earn some extra money to help when a family’s income stream suddenly stopped because of layoffs, or coalfield closures. This helped me see that mankind shows its best character when we help someone in need. It taught me that friends and family stick together during difficult times.

In those happy times, when friends or neighbors dropped by, one of them might break out a guitar, a banjo, an autoharp, or dulcimer. That was a sign that the neighborhood may be in for an impromptu jam session. While the musicians sawed away on fiddles or hammered a tune on a five-string banjo, the kids danced flatfoot, or ‘clogged.’ One friend of mine could play any instrument by ear. It didn’t matter if it was a string, brass, woodwind, or percussion. I envied him since I had to learn to read music and practice to play anything and then still not perform near his level. 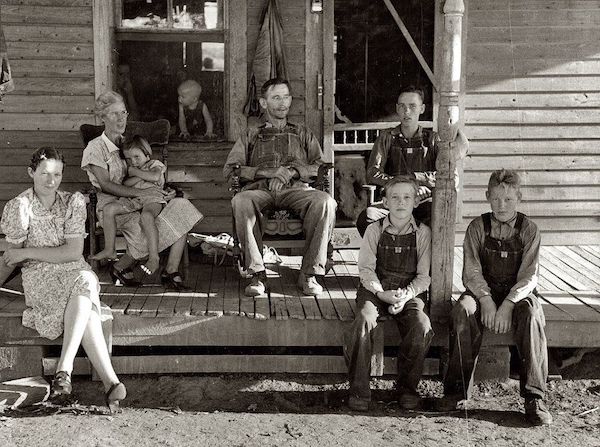 Some families I knew didn’t have a large porch, but they instead sat under a shade tree. Others used a stoop, but to me the thing that made these evening events was much more than the location, but the ‘gathering’ itself. People sitting ‘out front’ was an open invitation to others to join and to join in a bonding. That makes for a strong community and a strong nation.

I remember when granny came out on the porch a couple of times during the day to sweep it free of coal cinders deposited from heavy clouds emulating from the passing coal-fired trains. Our home was only a block from the C&O railway that transported coal from the mines to the coal piers in Virginia. We had two steam-fired passenger trains and several steam-fired freight, and coal trains each day that went through town sending heavy blankets of smoke and cinders that blanketed everything. Granny swept the porch to insure it stayed clean enough for the guests that might come by later in the evening. She did not want to give the impression she was not a good housekeeper.

Today, we are all too busy to have these porch visits. Appliances were sold to us to save us time, but they tied us up, instead. Now we are glued to televisions, video games, cell phones, computers, and in some cases our jobs. The stores that used to close at five are now open late if they close at all. Today, people live in houses or apartments for years and don’t even know their neighbors. The closeness of family and the richness of life was measured by our friends and our experiences, but those are disappearing. The front porch was our life’s antenna but we have lost our reception.

Perhaps we can blame the pandemic, or all that modern technology that has us playing games or texting instead of talking, sharing, and bonding with each other. Frankly, it’s our loss you know. The old ways had their rewards. The new ways are taking the awards away and replacing them with things we never knew much about. We read of drugs, violence, porn, and total disrespect of the institutions that once were a layer of protection. Maybe it’s time for families to meet again on the porches, under the trees, or wherever we can to once again support one another and find the things that make life worth the living.