Lick Creek, Ky. — In a game that started three hours late because of rain, didn’t end until Tuesday morning and was played in the fog, Johnson Central ( 26-13 ) won the 15th Region baseball title with a 8-3 victory over Lawrence Co. ( 29-7 ) at East Ridge High school. 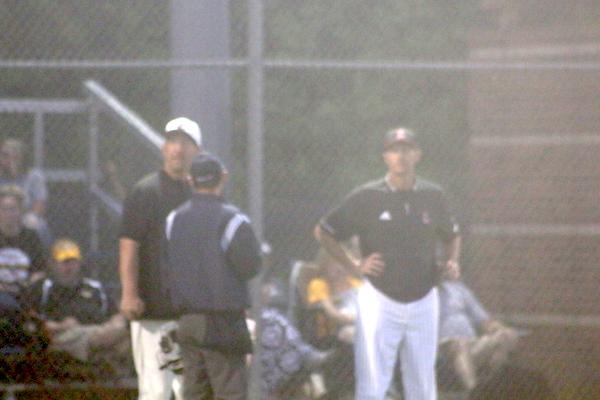 With the Dawgs leading 2-0 the Golden Eagles scored five times on one hit in the decisive fourth inning. Johnson Central added a run in the fifth and two more in the sixth to take an 8-3 lead into the seventh inning.

In a wild seventh inning Nick Collinsworth led off with a bloop hit down the right field line but was thrown out trying to stretch it to a double. Blue Fletcher and Braydan Maynard reached base with one out and Abner Collinsworth hit a ball down the left field line and nobody called anything so he circled the bases for a three run home run before all four umpires met for several minutes and ruled a do over and Collinsworth would eventually strike out for the second out, Bryce Blevins singled in Fletcher making it 8-3. JC got the final out in the next batter to win a wild one.

Offensively the Dawgs out hit Johnson Central 6-5 with Blevins collecting two hits including a double and driving in one run, Blue Fletcher and Maynard singled and scored a run each, Jake Derifield and Nick Collinsworth both singled and Jacob Fletcher drove in a run. 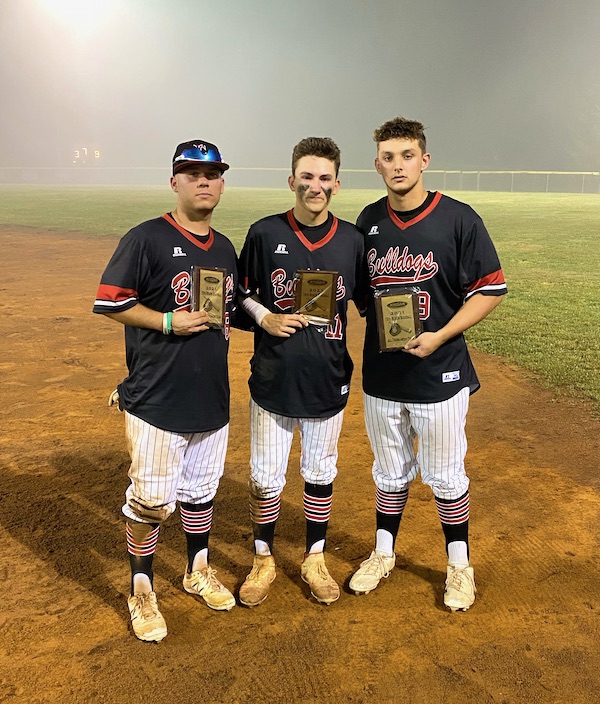 L to R Bryce Blevins, Will Lafferty and Ethan Whitt

Blue Fletcher started for the Dawgs and took the loss. He went three innings, gave up three earned runs, only one hit but walked six while striking out two.

Jake Derifield relieved him and went 1/3 of an inning gave up one earned run, one hit and walked two.

“… I have coached longer than any of the kids in our program had been alive and I get worse and worse each year at talking to them after the season wraps up.”

“… People have no idea how much we ask of our kids in this program and when you do that, they have an expectation and they came down here expecting to win this tournament. They expect to end the season with a win but only one team does that. It’s hard to come up with the words but I can tell you this for sure, I am more proud of this team than any team that I have ever coached or been apart of. The level of uncertainty for the last 20 months, we graduated the Austin Roe class and then the 2020 year that got canceled hurt these kids. It was a gut punch to Sammy, Corbin, Tyler and Jackson along with their families. I can handle it professionally and personally but what people don’t understand is what harm it done these guys right here. For what they were able to accomplish is unbelievable really. I don’t think anyone would have imagined this team winning 29 games and play for a region championship and as sloppy as it was we had our chances and we played them a lot we would win a lot of them. Hats off to Johnson Central they were able to overcome and execute and I wish them well Saturday.”

“… Preseason I would have given us no shot at winning 29 games, it wasn’t the youth it was the inexperience. We only had three kids that had played varsity baseball for you that’s it, two of our four seniors had never put on a varsity uniform before and Nick Collinsworth comes out and studs it up all year long, Ethan Whitt and Jacob Fletcher lose that time last year and you look at their numbers it was unbelievable. We didn’t hit tonight but we have hit all year long. I could talk all night about them. I’m beyond proud of this group we have a lot coming back and every one in the region knows that but we have work to and improve so we can win three this week and not two.”

“… I told my coaches in my opinion I have the best coaching staff in any sport anywhere, good men that are good to these kids that are knowledgeable in the game and are committed and it just hurts for it to end.”

“… I have told the kids all along about Lawrence Co. baseball and what it is known for around the state and that’s not me or Jackie or Randy Keeton or Stevie or Matt it’s the kids they put the work in, they win a lot of big games and they are willing to work and so are we.”